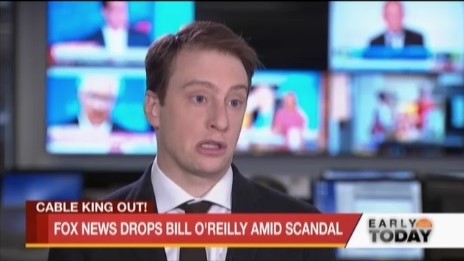 NBC News has announced it will create a more formal media-news unit (like CNN’s) as media “credibility is under attack.” New York Post media writer Claire Atkinson will head the unit, but the remaining names look pretty liberal, starting with perpetually Fox News-busting Gabriel Sherman and BuzzFeed editor Ben Smith, who can’t find anyone in the media who sounds like a liberal activist.

“This team brings together outstanding in-house NBC News & MSNBC talent with outside contributors who are among the most respected and most followed editors and journalists in this space,” wrote NBC News president Noah Oppenheim, MSNBC president Phil Griffin, and NBC News digital chief Nick Ascheim in an internal memo that TV Newser posted.

The "all-star" team also includes former Los Angeles Times media reporter James Rainey (who's been reporting for MSNBC.com for a while) and former Time Inc. editor-in-chief John Huey, recently seen on CNN's Reliable Sources agreeing with host Brian Stelter about all the usual characterizations of President Trump as a dangerous demagogue and authoritarian figure.

Variety suggested this kind of media reporting on media is now rewarding:

The industry is also in the midst of an era when gazing at its own navel seems to bring more tangible rewards than it has in the past. In a nation riven by politics, discussion of Fox News, MSNBC, CNN, The New York Times, Breitbart and other media sources often sparks a torrent of clicks and page views, many of which can be monetized by throwing the numbers to media buyers and demanding better prices for the audience that has been assembled.