Can It Be? NPR Gives Hillary (Comparably) Tough Book Interview 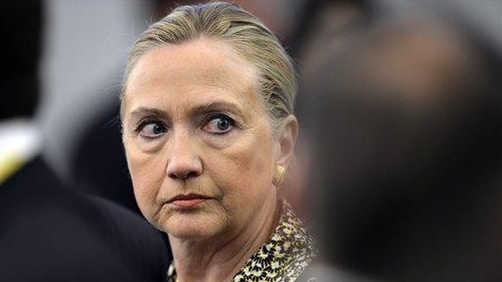 In a metaphorical Candy Land of sugary interviews, Hillary Clinton seems to have stumbled into one media outlet that must have surprised her with a (comparably) tough interview. It was NPR, and Morning Edition anchor Rachel Martin. Hillary's curt answers -- including that the question is "not useful" -- gave away her disgust.

On Tuesday, Martin began by reading from the book an anecdote about how Clinton found herself loathed in West Virginia for saying she wanted to "put a lot of coal miners and coal companies out of business." (Add the obligatory liberal talk about she'd get them all new jobs.) She made an appearance before people in Mingo County, many of whom she said "hated my guts." That was just the opening. Let’s list some questions NPR launched that the others aren’t eager to ask.

1. Are women voters who didn’t vote for you guilty of sexism?

MARTIN: You mentioned, and you spent time in the book talking about the forces you feel were working against you. You also say sexism was one of them, but you yourself, in the book, acknowledged that a good number of young women didn't vote for you, which is presumably not a sexist choice. They just weren't inspired by your message.

CLINTON: I think it's a lot more complicated than that. I did win the women's vote. I didn't win the vote of white women, but I got more white women votes than Barack Obama did. I think it's much more difficult to unpack all of this, and with respect specifically to young women, I do think that for a lot of young women, gender is just not the motivating force that maybe it will be in the future. But then it wasn't. The same way that being African-American was really motivating and exhilarating for black voters.

2. Were you a doomed candidate from the get-go?

MARTIN:  Why would it have ever gotten to the point where something like the Comey letter could have shifted so many opinions? Why was it ever that tenuous? I mean, you say in the book, "American elections are about change, or they're about the future, or some combination thereof." And for many people you are about neither. Did your candidacy have an irreparable flaw from the beginning?

CLINTON: I don't think so. When you win the popular vote by three million votes, and when there were all of these outside forces coming at me right until the very end, I don't think you can say that we didn't have a strong campaign. I'm proud of the campaign we ran. We had an incredible organization. We had more people working on the ground in states like Wisconsin and Michigan.

MARTIN:  But you could not put together the Obama coalition. You did lose five million people who voted for him who did not vote for you.

CLINTON:  I would say two things about that. First, there were certainly people who voted for him who felt like, for whatever combination of reasons — and there's some good research about this — that, you know, they just weren't happy with where things were and they didn't know what they were going to do, and they did not vote for me. That's absolutely the case. But you have to also look at the suppression of voters.

3. "Could another Democrat have beaten Donald Trump?"

CLINTON: Oh, I don't think it's useful to speculate, because I was the nominee. I mean, you can say that about George W. Bush and Al Gore and John Kerry...

MARTIN: Although you do spend more than 400 pages going back in time and thinking about what if's.

CLINTON: Oh, I do. But what ifs that I think are realistic to think about because, you know, what if I hadn't made the dumb mistake about e-mails? And it was a dumb mistake, but it was an even dumber scandal. What if the Russians hadn't been literally encouraged by Donald Trump to do even more to disrupt the election? What if the Supreme Court had not reversed the Voting Rights Act, which I was proud to vote for when I was in the Senate, and I still maintain the kind of protections to make sure that no American is disenfranchised?

MARTIN: What if Joe Biden had been the nominee?

4. What about Democrats who want you to just go away?

MARTIN:  Although you say you still want a role in shaping the Democratic Party of the future, you're still going to talk about the issues you find to be important, but there are some Democrats out there saying they don't want you to do that. That writing this book is opening old wounds, re-litigating a past and it doesn't help move the party forward. Have you reconciled that, that people might not want you around as the party steps forward?

CLINTON: Well, they don't have to buy my book, and they can turn off the radio when they hear me talking. I'm not going anywhere. I have the experience, I have the insight, I have the scars that I think give me not only the right, but the responsibility to speak out.

5. Didn’t you run like you were entitled to the nomination?

MARTIN: I want to ask you about something you write at the very beginning of this book. You talk about needing to learn lessons from the 2008 campaign to apply to the campaign in 2016. And you write this: that unlike in 2008, you were, "determined to run like an underdog and avoid any whiff of entitlement." So you were aware that that was kind of around you in 2008. But there is and was this whole wing of the Democratic Party, many of whom ended up supporting Bernie Sanders, who believe that that is exactly how you ran in 2016 — as a person who, yes, had paid their dues, had done the work and had prepared, and that somehow you believed it was your turn to be president.

CLINTON:  Well, I just totally reject that. As you probably would have expected me to say. I find this criticism from Sanders supporters to be so off base. He's not even a Democrat. That's not a slam on him. He says it himself. He didn't support Democrats. He's not supporting Democrats now.

6. Did familiarity with you (and Bill) breed contempt?

MARTIN: Did you underestimate the way that your familiarity with the American public could negatively impact your campaign?

CLINTON: Well, I thought it was pretty revolutionary that I was the first woman to have a realistic chance of becoming president. So I don't know how any woman who is not familiar to people, since we have so many hurdles to overcome, could have even been in that position that I found myself. So if I won, you know, I would have been seen as a genius, my campaign would have been as perfect. I understand all of that. But I'm not writing this book, I'm not talking to you about it because I'm somehow aggrieved. I don't feel that at all. [Insert laughter here, NB readers.]