Tom Brokaw on MSNBC: GOP 'Has Been Declaring War on Hispanics In This Country'

On Wednesday’s broadcast of MSNBC’s Morning Joe, former NBC anchorman Tom Brokaw commented on President Trump’s DACA decision by stating that the GOP has been giving people with Hispanic surnames the back of their hand and “declaring war on Hispanics in this country.”

Mika Brzezinski began with the usual smug giggle: “DACA. What do you think happened yesterday?”

TOM BROKAW: I think what happened is a continuation of the Republican determination to cut out Hispanic votes on their side, for as long as we can see. This has been going on for a long time. This is a rejection, on the part of the Republican Party, that we have Hispanic citizens in this country and other people, who, in many ways are inclined to share their values. Stuart Spencer, the genius of Ronald Reagan’s campaigns, he used to say we should have the Hispanic vote in our corner. These are people who family-oriented. They’re faithful. They work hard. They’ve got all those values. But for a long, long time, the Republican Party has been declaring war on Hispanics in this country.

If the Republicans were "determined to cut out Hispanic votes," why was Trump’s share of that vote larger than Mitt Romney’s in 2012? And why must allegedly unbiased, moderate, and civility-loving journalists use wildly exaggerated metaphors like "declaring war on Hispanics," as if it's a shooting war? Or a program of death camps? Liberals can hardly mock conservative talk of an immigrant "invasion" if they're going to match metaphor for metaphor.

It's possible that the old Reagan approach to "family-oriented" Hispanics might not be so easy any more. A 2014 Pew Research poll found them to be notably liberal on gun control and the minimum wage, and close to white opinion on abortion and marijuana legalization.

Brokaw then said the country needed to get immigration under control with a comprehensive “reform” bill. 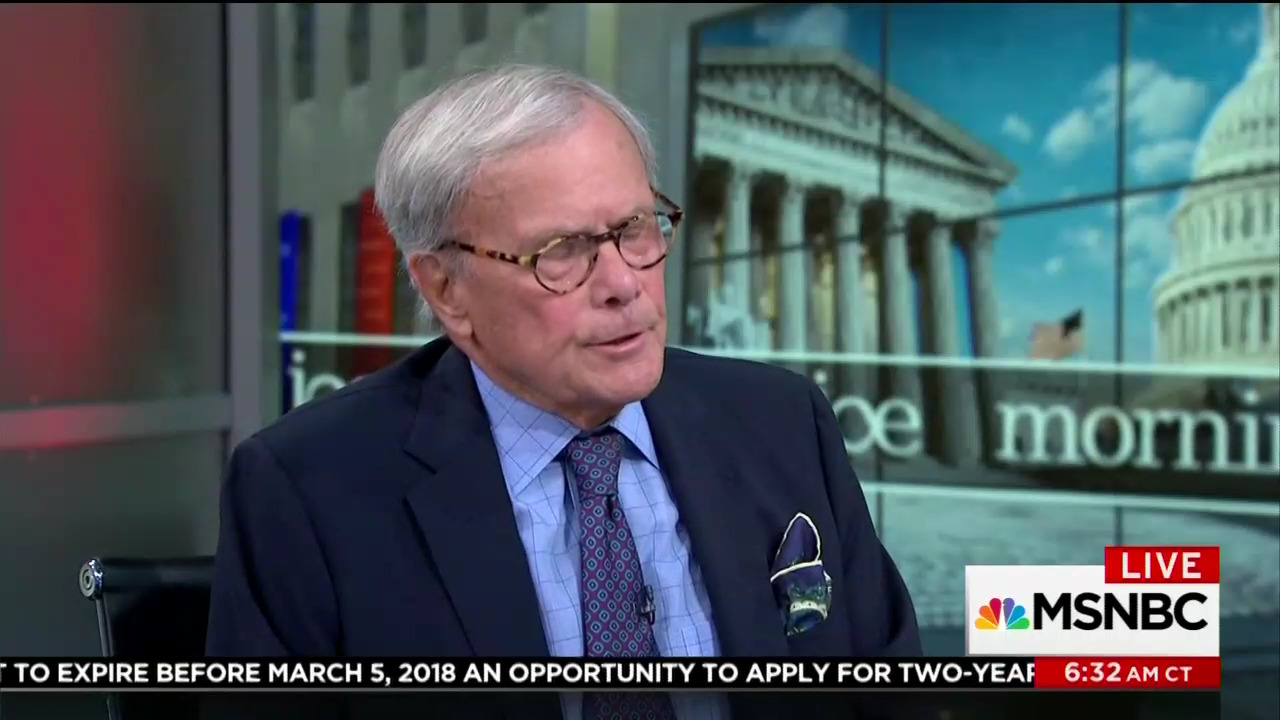 BROKAW: We need a big one, because this is not going to go away. But the reason you see resistance on the Hill is that the Republicans there know that if they turn the Hispanic voters against them in the southwest, and now increasingly in the midwest, where they work in meat processing plants -- Scott Walker, the governor of Wisconsin, says the dairy industry in northern Wisconsin goes down if we lose all the workers that are up there.

They're doing the jobs that a lot of Americans just don't want to do anymore, in meat packing plants. It’s not that they don't want to work hard. These are terrible jobs they're fulfilling. So, I — it’s hard for me to see the big picture, from a Republican point of view, Joe, going forward and just giving the back of your hand to people who have Hispanic surnames.

Brokaw also said that he’s spent time in the Western states over the last few months, and he knows the folks there aren’t big fans of the pundits on news shows. “They look around and they say you guys are well paid, you show up in your coats and ties, you've got an answer for everything, you're critical of everything that goes on in this country, and we're just kind of tired of it.”

So why doesn't this make the pundits more humble?