The taxpayer-funded liberal sandbox known as NPR lowered itself to a Newt Gingrich interview on Wednesday’s Morning Edition, and Gingrich was combatively countering the media narrative on the Russia probe. He insisted special counsel Robert Mueller and fired FBI director Jim Comey represent a “very liberal” Justice Department that has identified no crime to investigate.

NPR anchor Rachel Martin was flustered trying to assert the usual liberal-media talking points...and then NPR actually brought on its own political correspondent Domenico Montanaro to rebut Gingrich -- and Newt didn't get to rebut Montanaro. Not only that, but on Thursday morning, Montanaro wrote an online “FACT CHECK” piece rebutting Gingrich's "scathing critique" on nine "facts or points of context." It challenged the "strained logic" of Gingrich's arguments for almost 2,500 words!

Here's Round One between Martin and Gingrich: 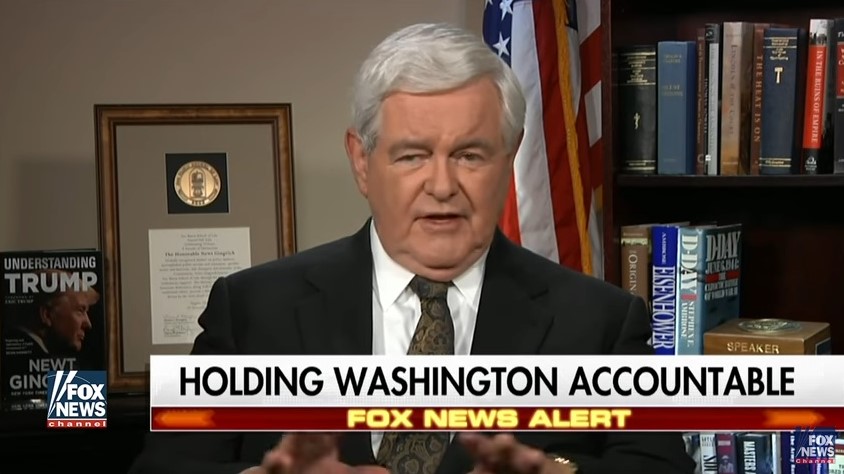 RACHEL MARTIN: The president went as far as to say that if he had known Jeff Sessions was going to recuse himself from the Russia investigation, which is his primary beef, that the president would have picked someone else. But it is not the attorney general's job to protect the president. Does...

MARTIN: Does President Trump understand the separation of powers here?

GINGRICH: Of course he does. But I think what you just said is not - you know, has a misleading implication. It is the attorney general's job to enforce the law. Mueller, right now, I mean, it's just - Andy McCarthy, who's a former Department of Justice prosecutor, who prosecuted the 1993 World Trade Center bombings, has said over and over again that there's no evidence of a crime. So what is Mueller investigating? Mueller's engaged in a - in a fishing expedition.

MARTIN: I mean, that is what an investigation is, you are pursuing questions...

GINGRICH: No, that is not true. That's not true. You have no reason for appointing somebody with the power of the government if you know - if you have no evidence of a crime having been committed. It's very clear in the statute which governs these kind of appointments.

MARTIN: So the Justice Department decided that an investigation was warranted, and that included the attorney general himself...

MARTIN: ...Even though he recused. And you're saying the president just thinks the whole investigation shouldn't happen in the first place.

MARTIN: That is suspect. I mean, when you have a president...

GINGRICH: Of course it's suspect to you. But isn't it equally suspect to you that 97 percent of the donations by people employed at Justice went to Hillary Clinton and that, in terms of Mueller's law firm, it was 99.82 percent went to Hillary Clinton. And in terms of the people he's been hiring, these are paid killers. If you read Sidney Powell's book about the Enron case, you will see these names coming up. And these are people who the Supreme Court...

MARTIN: So Jeff Sessions, though, is not a liberal by any stretch of the imagination.

MARTIN: He's not a Democrat. And he's the leader of that department.

MARTIN: So you're suggesting that the president hire an attorney general who would plant and insert an entire department full of Republicans? That seems to be antithetical to the department's entire raison d'etre, which is to be above partisan politics.

It's refreshing to see someone not bowing to the D.C. narrative that Mueller and Comey are the very picture of Ethics and Independence and Neutrality. That only means that the liberal establishment want to imbue them with a righteous aura to enable them to take President Trump apart. If Mueller completely clears Trump and his campaign team of any crimes, the halo will probably fade as quickly as it ascended. Everyone admits there are no crimes that have been uncovered. Everything is based on the hope that Trump will look like a crook...or if not a crook, a traitor.

MARTIN: We should say that it is - you can't demonstrate that these are anti-Trump lawyers. It is...

GINGRICH: Oh, give me a break.

MARTIN: It is true that there are...

GINGRICH: Give me a break.

MARTIN: ...At least a couple who have made donations to Democrats. But Robert Mueller himself has been registered as a Republican.

GINGRICH: Do you think they probably have a bias?

Notice Martin refuses to answer his question. She's not debating him -- she'll let Montanaro rebut him:

MARTIN: Let me ask you this. President Trump admitted that he fired former FBI Director James Comey because of the Russia investigation. He's called the investigation a witch hunt. He's now suggesting the attorney general isn't protecting him enough. So if he has nothing to hide, then why is he acting like he does?

GINGRICH: Well, now, (inaudible) history of Comey's last independent counsel, Patrick Fitzgerald, who Comey got appointed after they knew there was no crime and after they knew who had leaked the CIA agent's name and they told the person who leaked to shut up, and they then went after Scooter Libby, who was Dick Cheney's chief of staff because they wanted to get Cheney -- and they then locked up a New York Times reporter [Judith Miller] for 85 days to get her to testify -- and you looked at that record, you would assume automatically Mueller's going to get somebody. And there's no question in my mind. Mueller's brought in killers. Those killers are going to go out and find somebody. These are not the kind of lawyers who are inclined to be neutral.

By this time, the liberal NPR audience is probably pulling off the road with the vapors that there's so much liberal-bashing coming across their "safe space." So Martin quickly turned to Montanaro for a snooty dismissal of Gingrich and everything he'd just asserted: 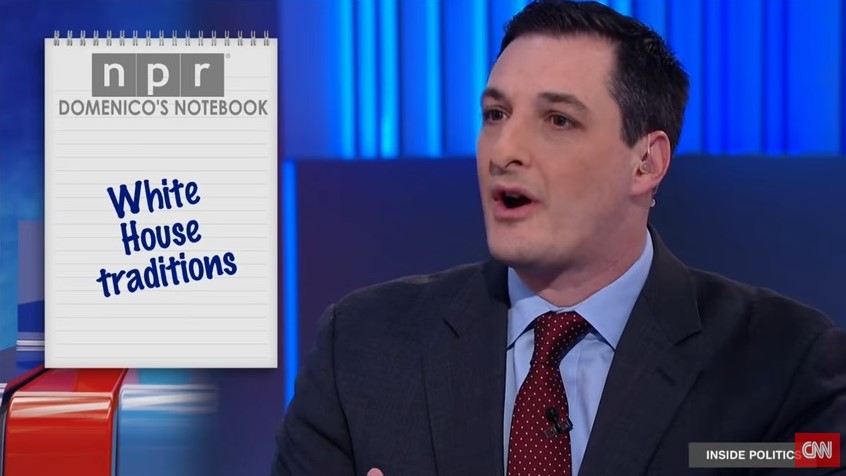 DOMENICO MONTANARO: Well, if you believe Newt Gingrich, you would believe that there's a conspiracy against Donald Trump within all levels of government, in particular at the Justice Department, which he called very liberal or having a culture that is very liberal. You know, I think most Republicans on Capitol Hill would probably disagree with him, especially when it comes to Robert Mueller. As you pointed out, Robert Mueller has been a registered Republican.

But donations themselves don't necessarily equate to an ethical conflict of interest. And they aren't even donations from Mueller himself. There were donations from people that Mueller worked with. But that's how conspiracies work. You sort of have guilt by association when it comes to whether or not you see conflict or at least try to muddy the waters. I think, you know, in addition to our audience, his other audience for Newt Gingrich was President Trump and for somebody trying to sell books, to be perfectly honest.

To be perfectly honest, Montanaro wasn’t appealing to the facts, he was gliding around them, questioning Newt’s motives and insisting there’s nothing to the idea that Mueller works for a liberal law firm and picked a pile of Hillary supporters to investigate a political question of whether Trump unfairly beat Hillary with Russian help. (This argument also comes in handy when you notice the dramatic majority of journalist donations going to Democrats.)

The grand omission by NPR is to consider for ten seconds the idea of how NPR and their liberal base covered a special counsel like Ken Starr in the Clinton years. Even in 2010, NPR’s Fresh Air touted as a “neutral” and “definitive” account of Starr vs Clinton a book by Ken Gormley, whose wrote a previous book hailing Watergate special prosecutor Archibald Cox as the “Conscience of the Nation.” Archie Cox was a big pal of the Kennedys, Newt would tell you, but NPR always pretends that prosecutors of Republican presidents are beyond reproach. 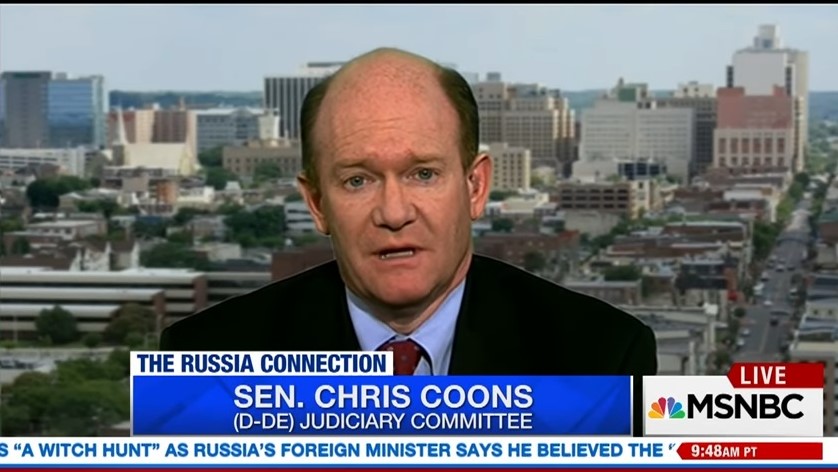 The double standard also came through loud and clear when the other host on Wednesday's Morning Edition, Steve Inskeep, interviewed Democratic Sen. Chris Coons on the Russia probe. Inskeep gently questioned the Democrat from the Left. He started with "Why not just have Manafort talk in public today?"

Inskeep helpfully prompted Coons to run through his list of concerns, like a journalistic valet: "Okay, so you have questions not just about that meeting, but also about Paul Manafort and his ties to Ukraine. And you're saying that you believe he failed to comply with a specific law here."

And: "That's what's on my mind, is what questions you have. You also have a question about how was it that the Republican Party platform happened to change on that particular issue [Ukraine], of all issues, right as the convention was getting underway?"

Inskeep did go to an NPR reporter for commentary after the interview, but Geoff Bennett wasn't there to rebut Coons, but to add helpful gloss to the "facts" Inskeep just nudged out of the Democrat and suggest Paul Manafort can't be painted as having "benign contracts," but had an "infamous meeting" with the Russians:

BENNETT: I think your interview with the senator points to the fact that Paul Manafort really is a central figure in this broader Trump-Russia investigation. You know, whereas Jared Kushner paints a picture of himself as a naive top staffer who is new to politics, who is having sort of these benign contacts with thousands of foreign officials, including some Russians during the campaign, the same cannot be said about Paul Manafort, given his lengthy lobbying and consulting career. The senator pointed to his interactions with Ukraine.

And so - and that is one of the reasons why congressional investigators have been clamoring to speak with Paul Manafort. The other thing I'll point out is that we understand Paul Manafort shared his contemporaneous notes from that now-infamous Trump Tower meeting last year with Senate intelligence committee investigators. Whereas Jared Kushner left that meeting after about 10 minutes, Paul Manafort was there for the entire thing, we understand. So his notes from that meeting will be crucial.