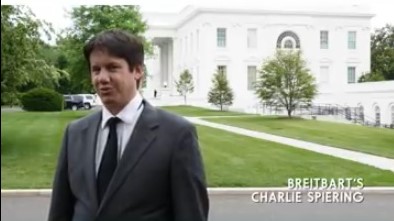 The White House Correspondents Association wasn't just phony when it claimed it wasn't going to hire someone to "roast" President Trump at their annual dinner, and then put on Muslim comedian Hasan Minhaj to roast Trump. This group of reporters is trying to change their by-laws to create a non-voting second tier of members....that caste of undesirables (or "deplorables"?) who cannot get credentialed by the "mainstream" press gallery on Capitol Hill.

At the moment, that's directed right at Breitbart, and their White House reporter Charlie Spiering, but it could easily apply to others.

For a bunch of people constantly yammering about transparency at the White House, the WHCA board was anything but transparent with their dues-paying members about this membership change. Many members were left out of this decision. The board voted to place the proposed changes on the ballot, then notified the affected members the same day ballots were mailed out.

The voting ends Friday, but there is a letter circulating by reporters from Breitbart, Circa, the Daily Signal,  and Newsmax -- as well as liberal talk show host Bill Press and longtime White House correspondent Connie Lawn -- urging a delay for more debate, and if that is refused, to vote no.

They wrote "the bylaws change would mean some members and hard pass holders who regularly cover the White House will not have full participation in the organization that is supposed to represent them regarding access among other things. Another unintended consequence of the rules change could also be undermining the board’s credibility when fighting for access and transparency."

They also asked why the rush? "No harm can come from more open dialogue such as a town hall, or at least interaction between the board and members. For those who might support the concept of this policy, we’d argue that there is no profound urgency to pass this immediately. The substance and merits of a policy change deserve the chance for open and honest discussion among members since it affects their status and could potentially negatively [affect] their employment."

They also urged the bylaws change should have a "grandfather clause," or else some reporters who are "regular members" now would be demoted to non-voting members on board elections and future bylaws changes.

The WHCA board—currently made up largely of liberal media outlets such as AP, Bloomberg, the New York Times, NBC News, Reuters, and Time magazine—won’t be able to keep reporters out of the White House under this proposed rule change, just keep them from any decision-making inside their club. Perhaps these liberals are afraid that conservative reporters will side with the Trump team on press disputes? It seems apparent they don't like the more "fair and balanced" shift in the news room to more conservative journalists, as well as the "Skype seat" questioners from outside the Beltway. They want to define "professional" reporters as basically liberal reporters.

WHCA president Jeff Mason (of Reuters) sent members a rebuttal to the protest letter, which said in part:

While we appreciate the concerns raised in this letter, the Board does not share the views expressed by these members.

As described in the memorandum you received, the Board's decision to amend the ByLaws followed a lengthy process where we discussed and reviewed all the proposed changes. The proposed change concerning Regular Members was adopted to codify both the intent of the original drafters of the ByLaws and the longstanding practice that has been followed by the WHCA in determining Regular Membership. The Board strongly supports this added amendment. The WHCA is not and does not want to be a credentialing organization [cough, cough] but we do want to make sure that our Regular Members are working, active and bona fide journalists. We believe such a requirement strengthens our ability to advocate for all journalists.

As CNN's Tom Kludt reported in his "ice out"-Breitbart story, the congressional press gallery denied Breitbart a permanent press pass in April over its ties to the Mercer family, who were funders of the Trump campaign, and to Steve Bannon's group the Government Accountability Institute. They cited a rule requiring publications to be "editorially independent of any institution, foundation or interest group that lobbies the federal government, or that is not principally a general news organization."

A conservative critic could say that PBS and NPR should then be denied a credential since they lobby the federal government for their funding -- especially right now, as Trump's budget defunds them. Then add on top of that leftist PBS and NPR funders like George Soros, who is certainly not running a news organization. More "mainstream" media outlets are taking money from liberal philanthropies, but we can guess they won't have their credentials requests denied by their liberal pals.