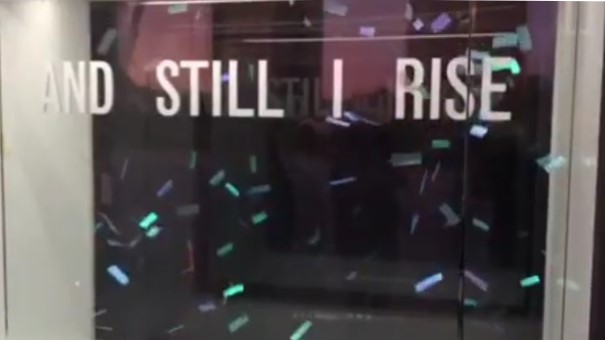 The title of the installation is “And Still I Rise,” named after a book of poetry by Maya Angelou. Confetti falls -- like from a snow globe -- from a window of the Bruno David Museum in suburban Clayton, Missouri. You can drive by late at night and feel inspired when you can't sleep because Donald Trump is president.

“It’s all about the empowerment of women. This is my metaphor for the future because I think that it is to inspire and to motivate and to empower young women and little girls to be bold, to dream big, to break their own glass ceilings, and to hopefully finally break that highest, hardest one,” Burson told Arnold. He asked tough questions like “How did you actually get this confetti”? It was shiny to represent shards of the glass ceiling being broken.

They packed 200 pounds of it back into cardboard boxes and she acquired it – whether it was donated or sold to her was left unclear. (Public-radio reporters aren’t big on getting answers from fellow liberals.)  Arnold also explained:

Burson has been a Clinton supporter for years. She served as executive director of the President's Committee on the Arts and the Humanities in President Bill Clinton's administration and as part of Hillary Clinton’s Missouri Steering Committee.

Burson's commitment to progressive politics remains unquelled since Trump’s election. She hopes to grow her project, inspired by Maya Angelou's volume of poetry, to motivate women before the 2018 elections — and help raise support for progressive candidates.

Burson said this exhibit would travel next to Colorado in December. She plans to make 1,000 snowglobes with the leftover confetti and sell them and give the funds to Planned Parenthood. Going to their clinics is apparently what women do to "be bold and dream big." They're shattering something in there, but it's not glass.