The secret-taping squad at Project Veritas are making sure CNN has a bad public-relations week. On the heels of three journalists resigning over an unsubstantiated online report on Russia and Trump, CNN Health producer John Bonifield is caught on tape admitting that CNN is producing news for liberals, and that talking about “cutesy little ethics” is “adorable” when cable news is a “business.” PV says the conversations were taped in June.

Liberal journalists usually respond to PV videos in two ways. First, they charge the videos are "deceptively edited," so somehow what the target says doesn't mean anything; and second, they absolutely fail to ask their own questions and follow up. See last year's tapes on Democratic activists admitting they were stoking violence at Trump rallies and so on. Already, The Hollywood Reporter is relaying CNN's response:  They will "not be releasing a statement" about the video, and "the network is not making a big deal about the video, which is seen by some internally as just a producer expressing his opinion about the network's coverage, rather than revealing a bias for or against the president."

Good luck with that spin. We all know that if a Fox News producer was caught on tape revealing insider details about a "bias for or against the president," the tapes would be obsessed over by Brian Stelter and the CNN Media minions.

Here are some of the revealing nuggets from the CNN Health producer.

“People are like the media has an ethical … But, all the nice cutesy little ethics that used to get talked about in journalism school, you’re just like, that’s adorable. That’s adorable! This is a business. Especially cable news, you know? Cable news isn’t the New York Times, and it’s not even like NBC News. I mean NBC News still gets 20 million viewers a night. Cable news is getting a million. So, they got to do what they got to do to make their money.... I love the news business, but at the same time, I’m very cynical about it, and at the same time so are my colleagues. [Laughs] I’m not alone.

[Fact check: The network evening newscasts together get to 20 million each night, but NBC is often under 8 million.]

Obsession with Trump "Colluding" with Russia:

Pushed by the PV questioner, Bonifield agreed the Russia story is "mostly bulls--t right now...So, I just feel like they don’t really have it but they want to keep digging. And so I think the president is probably right to say, like, look you are witch hunting me. Like, you have no smoking gun. You have no real proof.” 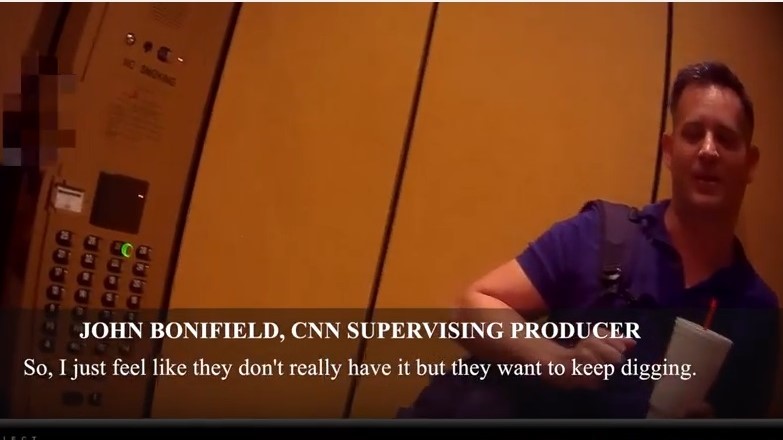 So why push it so hard? "Because it's ratings," Bonifield said. "Our ratings are incredible right now."

“Like, we don’t have any giant proof. Then they say, well there’s still an investigation going on. And you’re like, yeah -- I don’t know. If they were finding something, we would know about it. The way these leaks happen, they would leak it. They’d leak. If it was something really good, it would leak.”

So how can CNN and Brian Stelter and Jim Acosta yell at Trump about not being accessible and not answering questions, and then ignore all these allegations about their own professional lapses? They're not even responding off camera so we can hire a courtroom artist to draw CNN boss Jeff Zucker or a PR spokesman.