Wrong, wrong, wrong. Handel was an executive at the breast-cancer charity Susan B. Komen Race for the Cure, and was booted out because of Planned Parenthood (and liberal media) pressure in 2012. 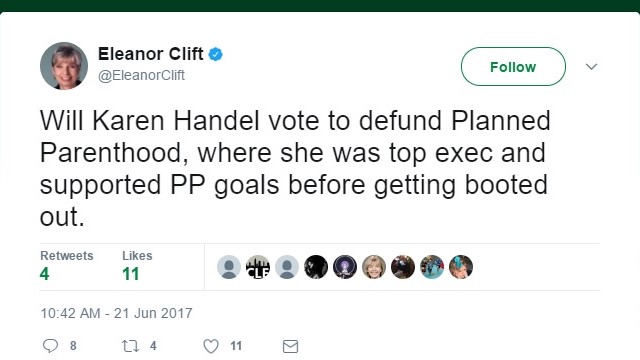 A House probe into Planned Parenthood caused Komen to announce on February 1, 2012 that they would no longer donate to Planned Parenthood. The outrage boiled over as ABC, CBS, and NBC rushed to help the abortion conglomerate. Over the course of about sixty hours, the Big Three propagandized the controversy with thirteen morning and evening news stories on how "women's groups" spurred "outrage and disappointment engulfing the Internet."

The soundbite count was loaded: 76 percent of the quotes (35 of them) came from Planned Parenthood. Only eleven clips or statements came from Komen representatives, so briefly on the pro-life side. NBC's Brian Williams teased a segment on the February 1 Nightly News hyping "a decision...[is] making a lot of women furious at the world's largest breast cancer organization. Why did it cut off funds for critical breast cancer screenings?" Komen folded, and fired Handel.

Eno pressed Clift for a correction on Twitter, and he got one: "my error, Handel worked for Susan G. Komen (not PP) and got pushed out over defunding Planned Parenthood. Now can vote to defund".

Eno pointed out a simple web search for Handel and Planned Parenthood gave him a Dallas Morning News story on Handel's firing from Komen:

It is members of the mainstream media like Eleanor Clift who push an agenda instead of facts, who are poster children for why the nation distrusts the media.

Clift's Twitter bio also mangles a fact: "I write for The Daily Beast and I'm a panelist on The McLaughlin Group , where I am on the progressive side and hoping next election better than last."