Maddow: 'I Am a Cheerleader For the Media,' We Will Save America from the Trump Crisis 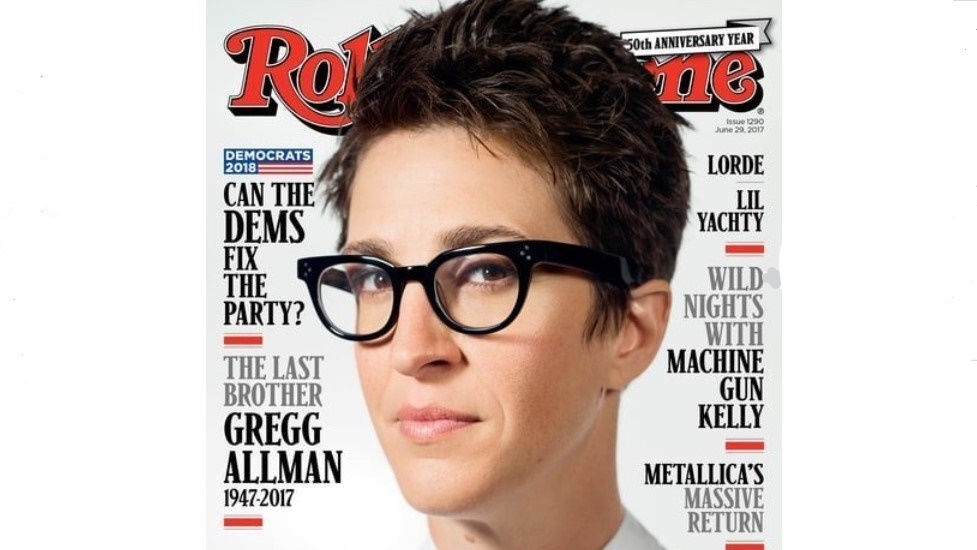 Reading the Rolling Stone cover story and interview of Rachel Maddow – at the same time that it’s reported the magazine is settling for $1.6 million with a fraternity it smeared with an utterly phony rape story from the University of Virginia – is jaw-dropping. Janet Reitman of Rolling Stone shamelessly asks Maddow questions including “Do you marvel at the degree to which the administration just blatantly lies?” And: “Have you found the whole fake-news and ‘alternative facts’ stuff to be a distraction?”

For her part, Maddow proclaims she is a “cheerleader for the American media,"an interesting choice of words since she tries very hard not to appear feminine. The liberal media – or the “free press” – will save American from the “political crisis” of our times:

Why do you think some Americans hate and distrust the media so much?

It's a convenient foil. I don't really care. I am a cheerleader for the American media and I feel like the free press is going to be what saves us from the political crisis that we are in. We just need to keep doing what we're doing.

What do you think we could do better?

I think the media needs to be protective in terms of its business model. There needs to be a remunerative vocation, which is called reporter, which is called editor, which is called publisher.... We need to do what we can to make sure that we defend people that are attacked for doing that work, and [also] that there are journalism jobs that pay above minimum wage so we get good people doing this work.

Right? I mean, news doesn't just happen – people need to appreciate that news comes from people digging it up and that journalism is a noble thing, and we've got to cheer for it when it succeeds.

Maddow imagines herself as an original thinker, someone coloring outside the predictable political lines. But it's a safe guess that her take on the two political parties -- the Republicans are endlessly fascinating for how terrible they are, and the Democrats are a bore -- is exactly how many reporters approach politics. Ask yourself how much coverage Tom Perez and the DNC are getting right now....it's very sparse, and yet nobody really notices. Maddow says the RNC is a giant jet engine, and the DNC is a cute, but kind of pathetic Honda Civic:

I was surprised to hear you don't see yourself as partisan when a lot of people would disagree. How do you defend that?

What about the Republican Party fascinates you?

I'm like a sociological student of the Republican Party – even absent Trump. There is a robust, well-funded, decades-old, superorganized, focused, competent conservative movement that exists outside the Republican Party that yanks the party's chain whenever they want to. The Republican Party is like an old burned-out husk of a Ford Pinto that blew up 'cause its gas tank was in the wrong place, but it's attached to a giant jet engine. The Democratic Party is like a Honda Civic. It putters through the world in a predictable way, and you like it or not depending on if you find small, unpowerful things cute. But the Republican Party has this incredible propulsion and no way to steer it.

This pose allows liberal journalists to pretend they're above the parties, when really they're just badly disguised Democrat publicists. Maddow knows how partisan her audience is...that's why she had to warn them in advance before showing anti-Hillary buttons being sold at the Republican convention in 2016, like "Hillary for Prison."

Reitman and Rolling Stone gushed over Maddow before they gave readers the interview. Oh, Rachel is "brilliant," she is "supremely gifted," she is the LeBron James of cable-news hosts:

Maddow goes on like this, describing the other stories she finds fascinating, or more specifically, pinpointing the most under-reported, yet possibly important, facet of the stories that interest her, and then drilling down, which can be riveting, as well as exhausting. But that's just how Maddow's brain works. "What's remarkable about Rachel is that she actually is that brilliant," says her senior producer Laura Conaway, who has worked for Maddow since 2009. "The thing about this show is it starts with digesting an enormous amount of information every day, and then basically throwing it all out and saying, 'OK, that's what everybody already knows.' It requires attention, and Rachel is supremely gifted at paying attention."

Maddow's friend and fellow MSNBC host Chris Hayes, who considers her a mentor, compares her to LeBron James. "No one can do what she does," he says. "She is a master of the medium in a way that is just unparalleled – she can figure out how to tell a story and do things she cares about in ways that grab people's attention, without just going to where the attention is. And she does that every night. To produce what she produces every day is kind of incomprehensible to me, actually."

This is Rolling Stone, so next you'll think she'll be compared to rock stars, and be called the Mick Jagger of investigative journalism. Reitman briefly brought up Sean Hannity, that "hater," for a different view, which is easily dismissed:

Do you care if you have haters? Sean Hannity called you one of the "worst examples" of the "propaganda press."

Sean Hannity said that? That's nice. I don't play requests. I get to decide what we cover. From the very beginning, I've had a deal with MSNBC that they don't tell me what to cover, what not to cover or how to cover what I cover. I'm not trying to make people happy. I'm trying to do an excellent job telling the stories that I think are important. That's all I can do.