The conservative group ACT for America held anti-Sharia rallies across America on Saturday and the liberal media covered them as organized by a hate group – as designated by the radical-left Southern Poverty Law Center (but liberals present them as objective!)

The Washington Post headline in the Sunday paper was “Anti-Muslim activists fan out in U.S.” The story by Abigail Hauslohner and Justin Moyer began: “Anti-Muslim activists hoisted American flags and delivered fiery speeches in rallies across the country Saturday, facing off against crowds of counter-protesters in several cities and exposing the visceral rage that has come to define America’s political extremes.” 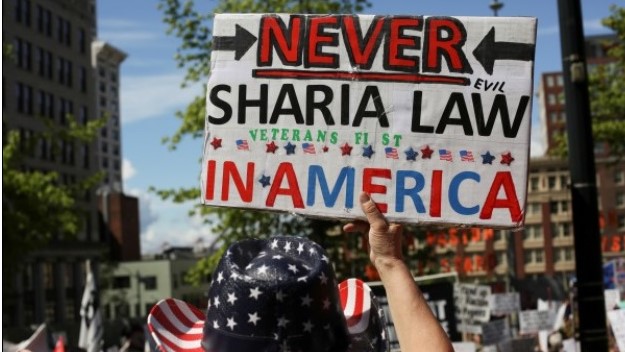 An NBCNews.com article that the Drudge Report linked to carried the headline “ACT for America Stages Marches Against ‘Sharia Law’ Nationwide, Arrests Made.” The SPLC made paragraph one:

Demonstrations against Islamic law led to arrests, tense confrontations and physical fights in some U.S. cities Saturday amid several rallies sponsored by ACT for America, which the Southern Poverty Law Center designates as an anti-Muslim hate group.

Reporters liked to note there were more counter-protesters than protesters. One Post photo caption noted “Turnout was relatively small, with rally crowds of a few dozen cities outnumbered almost 10 to 1.” That was repeated in the article text:

The turnout was relatively small, with rally crowds of a few dozen in many cities outnumbered almost 10 to 1 by counter-demonstrators who tried to drown out their voices with drums, bullhorns and cowbells.

ACT, which has drawn condemnation from civil rights groups for its frequent criticism of Islam and its efforts to pass state-level bills targeting Islamic law and refugees, organized the protests as a nationwide “March Against Sharia” and a defense of human rights.

“We’re here protecting their rights, and they’re trying to shut us down!” Pax Hart, the organizer of the New York City rally, told his audience, referring to the gathering of hundreds of leftist activists and masked anarchists across the street. “It’s insane!”

ACT for America, which the Southern Poverty Law Center recognizes as a hate group, was founded in 2007. Its leaders, who claim a 500,000-strong membership nationally, have labeled Islam a “cancer,” propagated theories of a secret plot by Muslims, Democrats, communists and the media to destroy the country from within, and sponsored lectures on how to monitor and oppose U.S. mosques.

"Civil rights groups" are dismayed by anti-Sharia protests, as if Sharia law and "civil rights" match.

Ironically, Hauslohner herself has been “monitoring” mosques as a reporter, and most recently covering a mosque in Falls Church, Virginia where an imam spoke in support of female genital mutilation. That was mentioned nowhere in the “anti-Muslim” story. But the recent stories in Detroit about FGM happening in America underlines what the ACT members are protesting.

Instead, the Post used several tactics they almost never employ at a left-wing march. For example, they plucked out that a “dozen members” of a white supremacist group called Identity Evropa came to the ACT rally in New York, when they never mention Communists or other extremists handing out literature at leftist protests. They noted “the rallies were laden with many false and exaggerated claims,” and just quoted individual protesters on the street.

Similarly, the NBC News online report stressed “In New York City, about 100 protesters and more than 200 counter-protesters traded words in downtown Manhattan as police officers stood between the groups. While they were speaking, counter-protesters were trying to drown them out using bullhorns and noise makers.” That sounds like the censorious Left.

NBC’s reporters Safia Samee Ali, Ali Gostanian and Daniella Silva just let the SPLC take over the article for paragraphs at a time, like this passage on why ACT is a “hate group” by their leftist standards:

“ACT demonizes all Muslims as terrorists who want to subvert the political system in this country,” said Heidi Beirich, director of the Intelligence Project at the Southern Poverty Law Center. They disseminate lies and fallacies about Muslims to spread fear about the religion, she added.

The Islamaphobic [sic] organization has gained significant momentum since its founding in 2007 by Brigitte Gabriel, a Lebanese immigrant who has openly called Islam inconsistent with U.S law.

ACT for America did not return requests for comment from NBC News.

“These marches are concerning because of what they will mean to the Muslim community,” Beirich said. “When an organization propagandizes an entire community, it tends to embolden some people to commit hate crimes."

Conservative protest always should be shut down because it could "embolden hate crimes." Liberal outlets also smeared the protests before they happened. An Associated Press report by Andrew Selsky mentioned death threats at a mosque in Eugene, Oregon, and the stabbings of two men defending a girl in a hijab in Portland, and then mentioned the rallies:

Looking ahead, Muslim leaders and others are concerned about anti-Shariah, or Islamic law, marches planned for Saturday in Seattle and about two-dozen other U.S. cities, saying the marches are really anti-Muslim. They consider the Portland and Eugene incidents, and other recent anti-Muslim crimes in America, part of an alarming trend that came to the forefront in last year’s presidential election with far-right activists portraying Islam — and all Muslims — as a threat.