Our friend Paul Bedard at the Washington Examiner reported Friday that fact-mangling MSNBC anchorman Brian Williams was at it again on Thursday when he wrongly implied that President Trump might not know that U.S. troops are stationed in Qatar.

MSNBC Producer Kyle Griffin tweeted: "Brian Williams on @MSNBC says a source tells him and @NicolleDWallace they're not sure Trump knew there were Americans stationed in Qatar." 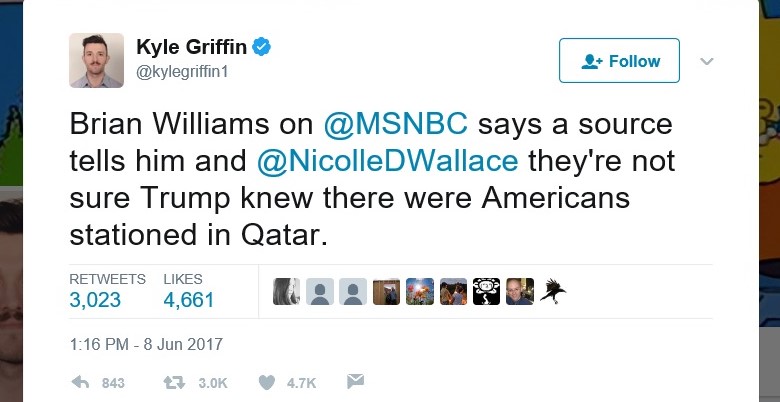 Ooooops. Bedard reported "All Williams had to do was check out NBC's own footage of the president's trip to Riyadh, Saudi Arabia two weeks ago when he talked about U.S. Central Command being based in Qatar."

He said in that speech, "Qatar, which hosts the U.S. Central Command, is a crucial strategic partner."

Late in a Friday e-mail from the CNN Media Unit, Oliver Darcy reported the White House was not happy, but as one might expect, MSNBC wouldn't acknowledge its obvious error:

On Friday afternoon Williams acknowledged on-air the remarks Trump made about Qatar in his Saudi Arabia speech, but did not retract his report. A network spokesperson told me the MSNBC was standing by it.

That said, the White House is unhappy: "This was irresponsible and lazy 'reporting' that shouldn’t have happened given that the actual facts were readily available," White House spokesman Michael Short told me via email...