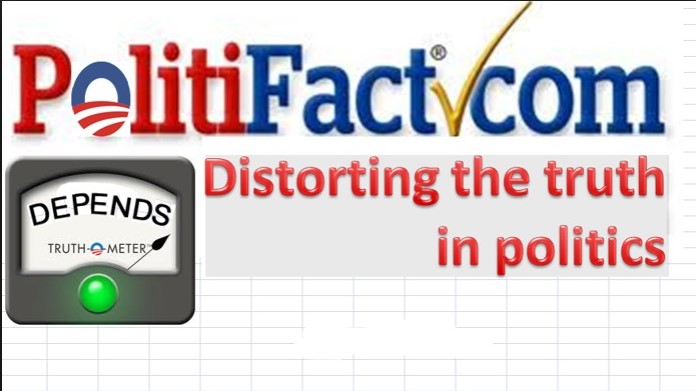 Alexios Mantzarlis at the journalism website Poynter.org reported "Conservative websites are far more likely to attack fact-checkers than their liberal counterparts." That almost sounds like "Conservative websites more hostile to facts." Something called the Duke Reporters' Lab issued a study of ten "partisan" websites and determined that the conservatives were much more hostile to the fact-checkers, while the liberals were overwhelmingly supportive.

Some of the attacks were "particularly colorful," and unsurprisingly, they quoted NRO's Jonah Goldberg noting Hillary Clinton's long record of dishonest remarks: "Even PolitiFact, the hackiest and most biased of the fact-checking outfits, which bends over like a Bangkok hooker to defend Democrats, has a long list of her more recent lies." The report called that a "wicked criticism."

It took ten paragraphs for the Poynter writer to note something incredibly important: The study's co-author was Bill Adair, a co-founder of PolitiFact. He never got around to noting that PolitiFact is funded by the Tampa Bay Times, which is owned by....the Poynter Institute.

It's somewhat humorous that Adair and his team of Duke student researchers didn't set out to determine whether the "independent" fact-checking sites fit the metaphor of hookers, but only to determine the feelings of liberal and conservative blogs. Adair won't consider the Fact that a site like PolitiFact is much more likely to penalize the conservative half of politics as reckless fact-manglers. He dismissed a 2013 study by the Center for Media and Public Affairs as a "press release."

"Shared facts" is exactly the field of combat here. Liberals insincerely insist that's all they want, but what they really want is to insist they own the facts and that they are the ones who determines they are factual, and anyone who challenges their sweaty grip is uncivil.

Adair and his team summarized, and mourned:

It is difficult for them [“fact” sites] to earn a reputation for independence and objectivity if one side is overwhelmingly critical of their work and repeatedly calls it biased. To use a sports analogy, if one team consistently questions the legitimacy of the referees, it will be difficult for its fans to accept the outcome of the game.

Poynter's blog even used a photo of an umpire fighting with a baseball coach to illustrate its story. This is a terrible analogy. Because if a sporting contest had referees or umps that showed as much favoritism as the liberal media, the fans would revolt or leave the stadium.