NPR Talks Up Trump as Watergate II, But Gets Misty About....Saddam Hussein?

This sounds like a bad joke. While NPR is offering stories on how President Trump is corrupt enough for impeachment like Nixon the Sequel, they make time for stories about how American soldiers got PTSD because they formed a complex human bond with the prisoner they guarded before his hanging....Saddam Hussein. This actually happened.

On Tuesday's Morning Edition, NPR host Rachel Martin began a story on White House counsel Don McGahn like this: "Fairly or unfairly, the specter of the Watergate scandal increasingly hangs over the Trump administration. The parallels have been spurred by a drumbeat of events, among them the firing of the FBI director, the apparent attempt to enlist top intelligence officials to quash the Russia investigation and even the suggestion of taping in the White House."

"Fairly or unfairly," your taxpayer-funded "news" channel is going to set out to destroy Republicans. That's what it did in Watergate, and here we go again. Right down the little corrupt touches:

FRED WERTHEIMER: The great baseball player Yogi Berra once said, it's deja vu all over again.

WERTHEIMER: The smoking gun in the Watergate scandals was a White House tape in which President Nixon was caught laying out a plan to get the CIA to intervene with the FBI to block an FBI investigation. Here, President Trump has gotten dangerously close to the line of doing the same thing.

Here's how that is a little corrupt: the leftist Icon of Transparency, Fred Wertheimer, is married to Linda Wertheimer, one of the first and longest anchors on....NPR. Who really needs transparency?

On Monday's Morning Edition, host Rachel Martin interviewed author Will Bardenwerper about his book The Prisoner in His Palace.

MARTIN: I'd like to have you, if you would, read a little bit from early on in the book. This is when you're describing the first few days of what it was like for these guys guarding Saddam Hussein.

BARDENWERPER: Sure. (Reading) "For these young men, it was like visiting a zoo and being forced to watch a creature who, though deadly, rarely does anything but sit, only occasionally deigning to walk across the cage to thrill the assembled spectators."

MARTIN: Things started to change. How did their relationship with this prisoner start to evolve?

BARDENWERPER: That was something else that struck me - was just the degree of intimacy that surrounded their time with Saddam. They had to essentially always be within what one soldier called lunging distance of him in order to just safeguard him. It was sort of inevitable that there would be some thaw in this relationship. And then I think, also, part of it was a reflection of just Saddam's own personality and his charm that he would try to engage them in conversation.

Martin begged the author to tell the audience about a soldier called "Doc Ellis," and how close he grew to the murderous dictator: "I think it is fair to say that they developed something of a relationship when Doc Ellis got word that his brother was about to die from some drug problems that he had had. He actually went out of his way to let Saddam know that he would be gone for a week because he didn't want Saddam to be upset at his absence. Saddam got up and embraced him and said, you know, don't worry. You're losing one brother, but I will always be your brother."

Then came the "sad ending," the hanging of Saddam: 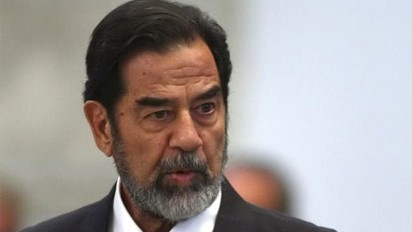 MARTIN: Can you describe the hours leading up to Saddam's execution?

BARDENWERPER: Sure. Well, by that point, they had been there for four months or so. And as they kind of gathered to bring him to the execution site, he kind of pulled them together and thanked them for the way that they had treated him. At one point, he said to them that you're family to me.

He actually took his watch off his wrist and handed it to one of the soldiers, who was reluctant to take it. And I think one of the themes that that really reinforces is the fact that it's a lot more difficult to kill someone that you've grown to know than to shoot at an anonymous target from 200 meters away.

MARTIN: How are these men doing today?

BARDENWERPER: I think their role in this continues to bother them, partly for the reasons that I just discussed about the difficulty of growing to know someone. And then, one morning, you bring them somewhere. And they walk and alive, and they come out dead. A few of them have dealt with PTSD. And they're still trying to, I think, reconcile exactly what they did and what it ultimately accomplished or did not accomplish.

When you go to the Amazon page for Bardenwerper's book, you see the publisher sells a "surprisingly intimate portrait of Saddam Hussein lifts away the top layer of a dictator’s evil and finds complexity beneath." So liberals want to focus on Trump as the Locus of All Corruption and Evil, while Saddam Hussein gets to be appreciated as "complex."