The website Snopes.com still advertises itself as the “oldest and largest fact-checking site on the Internet,” so I was puzzled when a Snopes researcher contacted NewsBusters about something that really wasn’t a fact check. It was a gaffe check. On Saturday, Snopes posted an article about an MSNBC analyst’s tweet: “Did a Counterterrorism Expert Call For ISIS to Bomb a Trump Building? Malcolm Nance's tweet was taken out of context in a ‘viral game of telephone’.” 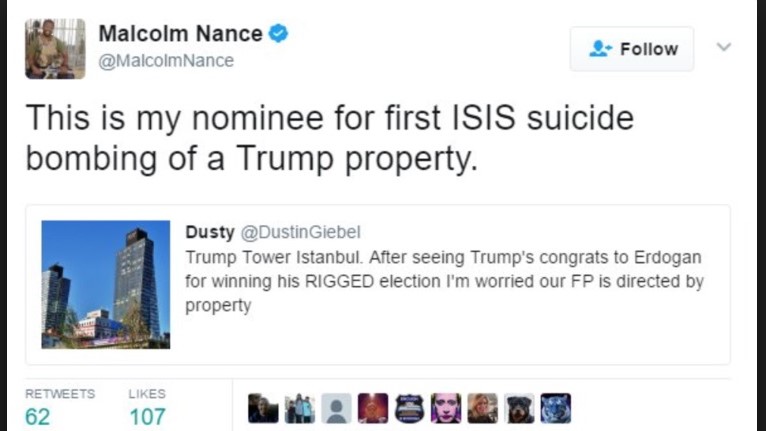 Nance tweeted about the Trump Tower in Istanbul: “This is my nominee for first ISIS suicide bombing of a Trump property.” There is nothing in this tweet that is a “fact” to check. Nance was “nominating” a property for suicide bombing.

Palma, to her credit, quoted my answer to her questions:

Question:  My question for you is whether you are concerned, given Mr. Nance's background, that this tweet was taken out of context. There have been a number of news reports that suggest that Trump-branded buildings could be vulnerable terrorist targets. My other question is, did anyone from your publication reach out to Mr. Nance to get his side of it before this was published?

Answer:  Nick relied on Alex Griswold’s article in the Free Beacon. Did you contact Griswold? [Griswold told us they had not.] We were passing along his Tweet scoop.

As you can see from the tweets in both articles, someone directly underneath suggests Nance has dreadfully gaffed. Nance deleted the tweet, but has not clarified or apologized. I believe it would be unfair to “fact check” this without him telling the world what on Earth he was trying to say. Are you “context checkers” instead of fact checkers? “Speculation checkers”?

If he had tweeted “This is my guess of the first target,” that would be a different context. He wrote “This is my nominee,” as in “I nominate this building for destruction.”

Snopes would be on firmer ground trying to urge Mr. Nance to find a more reliable “context” if he's merely making a prediction. Then came the followup question:

Question: Last question, if you would be so kind. Do you think a reasonable person would believe that a person whose career is based on his military counter-terrorism background would publicly advocate a terrorist attack?

Answer: That is not a "fact-checking" question either. As conservatives, we are used to leftists suggesting that the "war on terror" terminology itself egged on a terrorist attack. It was suggested that Bush and Cheney benefitted from terrorist attacks, inspiring the 9-11 truthers. Counter-terrorism experts with a military background are likely to seek a military solution, which is often implied to cause more terrorism than it prevents.

Hence, Nance announced on MSNBC in 2016 that "Donald Trump is the ISIS candidate." Did you "fact check" Nance on that one? If not, doesn't it make it easier to believe he would nominate Trump properties for destruction?

I didn’t get an answer to that question. Instead, Palma marshaled a “suggestion” instead of a fact, that ISIS preferred Trump. If Palma is so desperate to bail out Nance because of how it damaged him politically, then surely she knows calling someone the “ISIS candidate” is an attempt to damage Trump politically. But she quoted the journal Foreign Affairs, a story titled “Why ISIS Is Rooting for Trump”:

First, Trump’s anti-Muslim rhetoric plays into ISIS’ narrative of a bipolar world in which the West is at war with Islam. Second, ISIS hopes that Trump will radicalize Muslims in the United States and Europe and inspire them to commit lone-wolf attacks in their home countries. Third, ISIS supporters believe that Trump would be an unstable and irrational leader whose impulsive decision-making would weaken the United States.

If ISIS was rooting for Trump, then would Snopes like to wonder why ISIS would favor a president who dropped very large bombs on them in Afghanistan? Or we could ask Snopes in their own argot: "Do you think a reasonable person would believe that ISIS would back a candidate who pledged to bomb the [poop] out of them?"

Some Snopes articles deal in obvious fact-mangling, such as "Did Marla Maples die in a plane crash?" Or "Woman gives birth to puppies after having sex with family dog?" This article is nowhere close to that genre.

Palma’s not-a-fact-check article concluded by suggesting they were somehow dealing with "evidence" and not staring at an obvious and embarrassing Nance gaffe:

We found no evidence to support the claim that Nance was advocating a terrorist strike on a Trump-licensed building in Istanbul. Instead, based on Nance’s current high profile position as a counterterrorism expert and his decades-long career of military service fighting terrorism, it’s not credible to assert that his tweet, while perhaps poorly worded, was in fact advocating terrorism.

Snopes might want to consider changing their slogan to "the Internet's most venerable defender of poorly worded liberal tweets."

PS: Breitbart has pointed out Palma has written some pretty aggressive tweets of her own, especially against white males. Such as “Racism is a caste system - what is done to groups as groups in a society. It is not white guys who are butt mad about Twitters." And citing the lefty website Vox: “When will the white community start worrying about white-on-white crime?????"