People magazine is no stranger to being used to rehabilitate liberals -- even when it sounds hopeless. (Case in point: repeated boosts of Mr. and Mrs. Anthony Weiner). In the May 1 People they try to rehabilitate disgraced CBS anchorman Dan Rather, now hailed by liberals as an anti-Trump crusader. Online, the headline oozed: "Inside Dan Rather’s Unexpected Comeback 11 Years After CBS Exit: ‘I Was Aching to Do Something'." 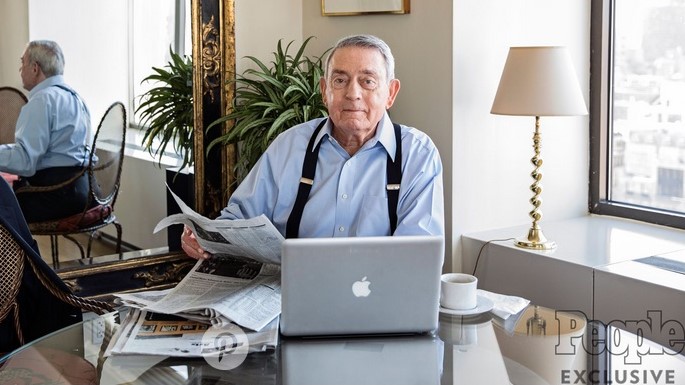 As a veteran journalist of 67 years, Dan Rather has had ample opportunity to master the art of keeping things in perspective even during the most unsettled eras — he was on the scene for JFK’s assassination, reported on Civil Rights and Watergate, and literally dodged bullets in Vietnam, for starters. Now, as America finds itself in what many consider another defining political and cultural moment, the legendary former CBS Evening News anchor has found more reason than ever to offer his steady, thoughtful point of view on the events of the day.

Rather’s most recent call to action came as the unprecedented 2016 presidential election hit a fever pitch as eventual victor Donald Trump clashed on the campaign trail with rival Hillary Clinton. “People were getting caught up in the day-to-day headlines — [Trump] sends a tweet, and everyone picks it up,” Rather tells PEOPLE exclusively in this week’s issue. “But there’s a larger picture — that is where historical perspective comes into it. I became convinced that maybe, in some small way, I’d have something to contribute. I was aching to do something of quality.”

...Rather’s hard-hitting take on Trump’s administration — including criticism of the President’s immigration policies and attitude toward the press — has won him a devoted following that frequently shares his posts more than 100,000 times.

It’s been a gratifying comeback for a man who was forced out of his anchor chair after a 2004 report on President George W. Bush‘s military service. The story relied on documents that had allegedly been forged and subjected Rather — long a target of conservatives — to a firestorm of criticism.

She continued with the pillowy prose on her own Twitter account. "Such a delight to talk 'shop' with him...It was an absolute honor & pleasure to speak with Dan Rather about demanding the truth & being courageous." Urp: 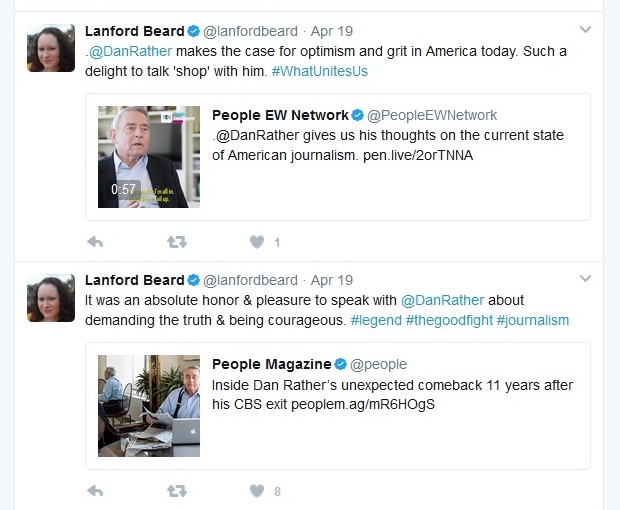 In the magazine (on page 63), the headline for a somewhat different Beard story was “The Return of Dan Rather: More than a decade after retiring over a controversial report, the legendary newsman has made a surprising comeback as one of President Trump’s most vocal critics.”

It features a picture of Rather with a newspaper and an Apple laptop. Underneath is Rather's Facebook message from days after the 2016 election: “Donald Trump should perhaps step away from his phone and pick up a copy of the United States Constitution. The First Amendment protects ‘freedom of speech... the press...and the right of the people peaceably to assemble.”

This is mildly funny to anyone who knows how People campaigns against that same Constitution’s Second Amendment.

The magazine promoted his new website and a forthcoming book of political essays titled What Unites Us, but also noted his Facebook posts have “won him a devoted following among liberals, and he’s now launched his own news organization, News and Guts, to protecting a free press. He’ll publish a book of political essays this fall. ‘For better or worse,’ he says, ‘I’m all-in.’”

One photo caption under “Career Milestones” connects Trump to Nixon: “The anchor sat down with President Nixon in 1972. ‘He was secretly making plans to try to undermine individual journalists and organizations,’ Rather says. ‘In the early stages of the Trump administration you see echoes of that.’”

People can't imagine that individual journalists would undermine themselves by using phony documents. The magazine article, too, grew mealy-mouthed on Rathergate, that "The story relied on documents that had allegedly been forged."

The print interview ends with a story on how Rather endured a yelling phone call from Trump after a 60 Minutes II feature in 2000. CBS found an expert to proclaim the campaign talk an "ego trip" and "one of the great media scams of all time," but that wasn't mentioned:

Once social friends (Rather and Trump met in the ‘70s in New York City and served on a charity board together), the two fell out in 2000, after Rather aired an unflattering report about Trump’s exploration of a presidential bid. “He hated everything about it, and he let me know in one of those phone-pulled-away-from-your-ear type of situations,” he recalls with a laugh. “He never spoke to me again.”

That being the case, the anchor is not hopeful he will be able to add Trump to the list of presidential interviews. “It may be more likely I would become the Archbishop of Canterbury thant that Donald Trump would call me,” he quips. But interview or not, Rather won’t stop digging. “American journalism needed a spine transplant,” he says. “We’d lost some of the grit. Now it’s all about asking the tough questions to hold the powerful accountable.”

That's hilarious coming from People, the magazine that never asks the tough questions from the Rathers and the Weiners and the Obamas and the Clintons.

People also made a ten-minute video on "Dan Rather's Comeback" narrated by Beard. She began: This week, People sat down with legendary CBS anchor Dan Rather...I got a chance to talk about his recent surge in popularity as well as his lifelong mission to speak truth to power and of course, Donald Trump.” Once again, Beard couldn't possibly blame Rather for accepting phony documents in his attempt to ruin Dubya's re-election:

BEARD: Soon he became known as the hardest-working man in broadcast journalism...His hard work and  reputation often put CBS at the top of the Big three networks. But then his career took a turn. They aired a report that George W. Bush, who was then the president, and a very controversial president, this was about one year into the Iraq war, that in his time with the National Guard, George W. Bush had been given preferential treatment....

They came under fire for their sourcing, and there were questions about the authenticity of the sourcing. It turned out that the person who had offered them the documents, um,  kind of had been dishonest about how he had procured them....It was a huge professional upset for him after he had spent his life, basically, you know, dedicated to the news and telling the truth, and speaking truth to power.

So Beard thinks the Bush-hating source Dan Rather and Mary Mapes used who "procured" the documents is to blame. Not the anchor who accepted forged documents. Who can't "speak truth to power" in this interview?

PS: Beard was born in the 1980s, so maybe she doesn't know she's fact-mangling when she sloppily repeated the Rather legend on the day JFK was assassinated: “He was famously the first to report that John F. Kennedy had been assassinated." Not only was he not the first reporter -- print or broadcast -- he wasn't the first to report the news on CBS. Former CBS producer Stephen Rosenblum wrote four years ago in The Hollywood Reporter about Rather narrating a 25th anniversary special in 1988:

Bob Pierpoint was not invited to participate in the 25th anniversary. But as he and I sat and watched the program, all you could hear on the archival footage on TV -- from Dallas to Lee Harvey Oswald to the funeral itself, was Bob Pierpoint's voice, narrating pretty much every event as it happened. And why not? He was the reporter. He was there. Not Rather.

But never once, in any of that Special Broadcast, did Dan Rather even once have the courtesy to mention Bob Pierpoint's name.