Samantha Bee to Hillary: 'You Deserve to Hear It 100 Times -- It Should Have Been You!' 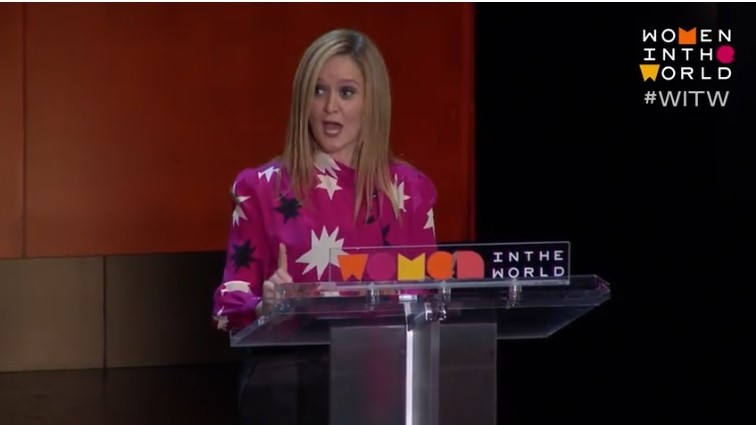 The New York Times surely warmed the hearts of Trump voters if they caught this headline from their Women In The World confab: "Samantha Bee to Hillary Clinton: ‘You deserve to hear it 100 times — it should have been you’."

The subheadline gushed: "The comedy virtuoso brought the house down at the Women in the World Summit with her exuberant introduction for ‘Hillary Rodham Beyoncé Clinton’."

Bee's roughly seven-minute introduction underlined that Bee is not any funnier when she's being super-positive than she is when she's being hyper-negative. Hillary was Hermione Granger and Beyonce and the inspirational and passion-stuffed avatar of a "lifetime of fulfillment and meaning."

The host of the TBS show Full Frontal began: "I’m surprised Secretary Clinton was available to speak tonight—I assumed by now Hermione would have returned to her rightful home at Hogwarts, where she’s rumored to be the new Defense Against the Dark Arts professor. At least we’re hoping."

Then came the proclamation of political grief:

Hell, I was supposed to talk about you on my show for the next 4 years–and now I’m saddled with that pint of flat orange Fanta who gives me way more material than I’d ever want. I thought—and feared—that you being elected would unleash a wave of misogyny in the US. But as we’ve seen, that happened anyway.

Bee also compared Hillary's job to hers: "Of course there could also be a future for you on basic cable if you’re interested in any sort of development deal. You’ll see that venting on TV once a week for 21 minutes is actually quite cathartic. You’d feel right at home—the haters will still call you shrill."

The most sincere feminist tribute came near the end, of HIllary's "beautiful" legacy, and no one dares to mention all the bimbo eruptions and rape-excuse-making she had to do to maintain power: 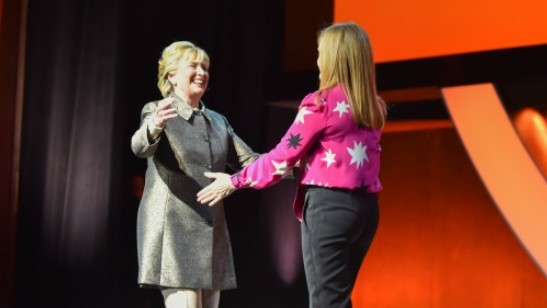 Though I know your work is not yet done, your mark has already been made, and you inspire people in so many different ways. Your work and its legacy is a beautiful thing to share with my daughters—to show them that the passions they have when they are young can become not just a career, but can lead to a lifetime of fulfillment and meaning. I know you don’t just mean that to me.

Then came the fan-girl close: "Ladies and gentlemen, you are not allowed to cry when she talks—that’s not why she’s here today. Please welcome, Hillary Rodham Beyoncé Clinton!" Then came the hug!