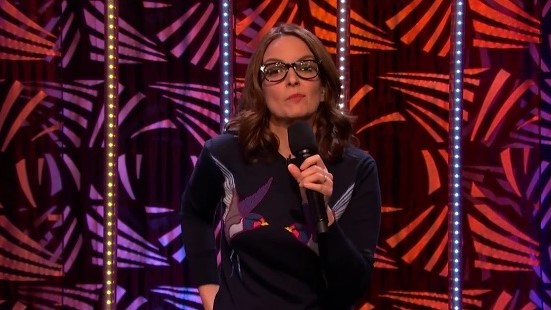 The Wrap reports Tina Fey made fun of Mike and Karen Pence at a Friday night Facebook Live fundraiser for the terrorist-defending American Civil Liberties Union. She played sort of an Anti-Church Lady.

"Right now it's not just about fighting for progress," Fey said. "Gains we've made over the last hundred years are under attack. Luckily, Mike Pence isn't allowed to go down and shut down Planned Parenthood unless his wife goes with him. So, you know, if we can just keep Karen busy scrapbooking, we can all still get pap smears."

The Huffington Post reported Fey also made the unsurprising Trump-as-sexual-predator joke (except for the usual Bill Clinton hypocrisy): “Earlier tonight, in what is surely an April Fools’ joke, the president proclaimed that next month will be National Sexual Assault Awareness and Prevention Month, so now we know what he gave up for Lent.”

Fey concluded with one last thought: " a lot of this election was turned by white, college-educated women who now would like to forget about this election and go back to watching HGTV …I, personally, would like to make my own pledge to college-educated white women to not look away, not pretend that things that are happening now won't eventually affect me if we don't put a stop to it."