One could easily count on the leftist snobs at The New Yorker to loathe the new pecking order at White House press conferences. Andrew Marantz wrote a snide piece full of anonymous whiners titled "Is Trump Trolling The White House Press Corps? At daily briefings, Sean Spicer calls on young journalists from far-right sites. The mainstream media sees them as an existential threat.”

Several snobbish TV reporters complained on the record, starting with Major Garrett, who once worked for the disdained Fox News Channel, but has learned the liberal drill: 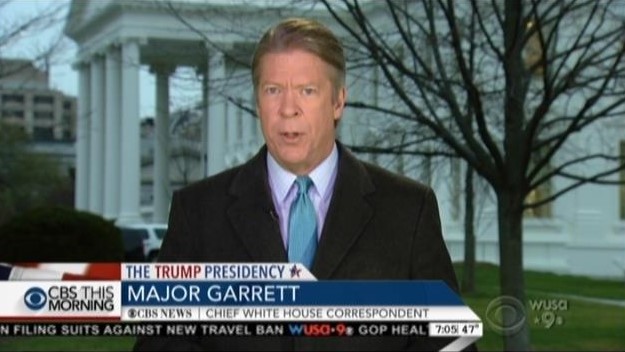 Major Garrett, the chief White House correspondent for CBS News, sits in the front row. “Historically, the way the briefing room has been organized is, the closer you are, the farther you’ve come,” Garrett said. “And the person at the podium has tended to recognize that.” More experienced reporters, he said, “ask questions that are sharper, more informed. Not, ‘What’s your message today?’ Not, ‘Here’s a paintbrush — would you paint us a pretty picture?’ ” If established reporters got fewer questions relative to the floaters, I asked, would this be good or bad for democracy? “We’ll see,” Garrett said. “We’re engaged in a grand experiment.”

I wonder if Garrett would like to describe his "mainstream" colleagues as pretty-picture-painters. Try this guy just two years ago with Obama:

MAINSTREAM SOFTBALL TOSSER: I wanted to ask you about what some people are calling 'your best week ever' last week. You had two Supreme Court decisions supportive of the Affordable Care Act and of gay rights. You also delivered a speech down in Charleston that was pretty warmly received. It seems that you've built up some political capital for the remaining months of your presidency. I'm curious, how you want to use it? What hard things do you want to tackle at this point?

That would be CNN’s Jim Acosta, whose distaste for Team Trump is beyond obvious. (Jim Treacher of the Daily Caller shot back to tweeting the bolded quote below and declared “Jim Acosta is a 14-year-old girl.”) 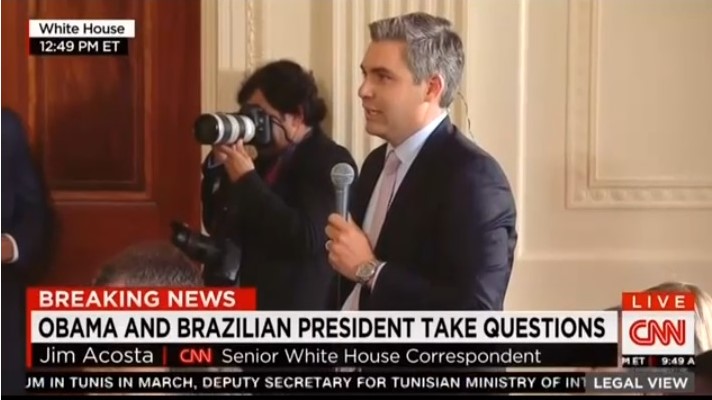 Jim Acosta, near the podium, stood and delivered a hit. "I think the age-old question — ‘What did the President know and when did he know it?' — that is going to be asked of White House Press Secretary Sean Spicer here," he said. His comments seemed directed as much at the reporters in the room as at the CNN viewers at home. Sitting down in his front-row seat, he said loudly, "Should we get Sinclair and the Daily Caller to move up to the front? If they're gonna go first anyway, it might make things easier." [The Daily Caller's Kaitlan] Collins stared straight ahead, avoiding eye contact.

The next day, the President held another two-and-two, this time with the Israeli Prime Minister,
Benjamin Netanyahu. Trump's two questions went to the Christian Broadcasting Network and to
Townhall. On the way back to the briefing room, three cameramen stopped outside for a
cigarette.

"Who's gonna get the next question at one of these?" one of them said. "Cooking Light? Maybe
Car and Driver?"

At least the Israeli press got to ask tough questions," another said. "I guess Israel's still a democracy."

Notice that Marantz doesn't have any valid journalistic reason to keep these sources anonymous, since mocking conservative reporters won't endanger them with their liberal employers. It's just another annoying way to pretend liberal journalists aren't liberal. The anonymous whiners are unintentionally comical, especially the complaint about Trump “court-packing” the press corps:

Until recently, the more established White House correspondents have regarded floaters as a harmless distraction—the equivalent of letting a batboy sit in the dugout. Now they are starting to see the floaters as an existential threat. “It’s becoming a form of court-packing,” one White House correspondent told me. Outlets that have become newly visible under the Trump Administration include One America News Network, which was founded in 2013 as a right-wing alternative to Fox News; LifeZette, a Web tabloid founded in 2015 by Laura Ingraham, the radio commentator and Trump ally; Townhall, a conservative blog started by the Heritage Foundation; the Daily Caller, co-founded in 2010 by Tucker Carlson, now a Fox News host; and the enormously popular and openly pro-Trump Breitbart News Network.

Perhaps Brian Stelter – hired by The New York Times fresh out of college before he'd turned 22 and snagged by CNN at the tender age of 28 – can tell The New Yorker this is mean to imply under-30 reporters are ignorant:

Most of the White House correspondents from these outlets are younger than thirty. “At best, they don’t know what they’re doing,” a radio correspondent told me. “At worst, you wonder whether someone is actually feeding them softball questions.” He added, “You can’t just have a parade of people asking, ‘When and how do you plan to make America great again?’ ”

An arrogant unnamed TV reporter said calling on the established liberal pecking order is how the “substantive questions” get answered, although at least Marantz allowed a contrarian to refer to then-New York Times reporter Jeff Zeleny’s “what do you find enchanting?” question to Obama from 2009:

A TV correspondent told me that calling on front-row reporters first isn’t just about appealing to their egos: “It’s also about maintaining a sense of predictability, a sense that eventually the substantive questions will be answered. Throwing that into chaos—‘Maybe you’ll get a question, if you shout loud enough, who knows?’ — makes everyone desperate and competitive and makes us look like a bunch of braying jackals. Which I don’t think is an accident.”

Naturally, the Skype questions were another source of loathing, because it’s silly to ask about coal-mining or federally protected lands:

Recent Skype questions were allotted to a Trump supporter and newspaper owner in Kentucky, who asked about reducing coal-mining regulations, and to a talk-radio host named Lars Larson, who addressed the press secretary, an officer in the Navy Reserve, as “Commander Spicer,” before asking whether the Administration would privatize federally protected parkland. During one of these sessions, Jared Rizzi, a White House correspondent for Sirius XM, tweeted, “Skypeophant (n.) – super-friendly questioner used to burn up briefing time through the magic of early-aughts technology.” “I certainly appreciate the purpose of bringing geographic diversity into the room,” Rizzi told me. “I also appreciate ideological diversity. I don’t appreciate diversity of journalistic practice.”

A longtime Washington reporter from a mainstream network echoed that sentiment. “I don’t mind them bringing in conservative voices that they feel have been underrepresented,” he said. “Personally, I don’t even mind them fucking with the front-row guys, the Jonathan Karls of the world. Those guys are a smug little cartel, and it’s fun to watch them squirm, at least for a little while. But at what point does it start to delegitimize the whole idea of what happens in that room? When does it cross the line into pure trolling?”

“Smug Little Cartel” is an excellent summation of The New Yorker. It would also be a fine newspaper motto for newspapers like The Washington Post, when they tire of “Democracy Dies In Darkness,” which defines a smug little cartel.