Talk about softball pitching. CNN Reliable Sources host Brian Stelter interviewed New York Times executive editor Dean Baquet on Sunday, and set him up to boast that the Times has never been hotter and that President Trump hates them because he has this "dangerous" tendency to hate newspapers who hold him accountable.

Stelter didn't point out that the Times endorsed Hillary Clinton as an excellent choice and added parenthetically "(We will explain in a subsequent editorial why we believe Mr. Trump to be the worst nominee put forward by a major party in modern American history.)" Stelter didn't point out the the Times took the unusual step of putting media columnist Jim Rutenberg on the front page insisting that journalists must be oppositional to Trump and deny him the presidency.

Instead, he counted that Trump has called the paper "the failing New York Times" in 53 tweets, and tossed the first softball: 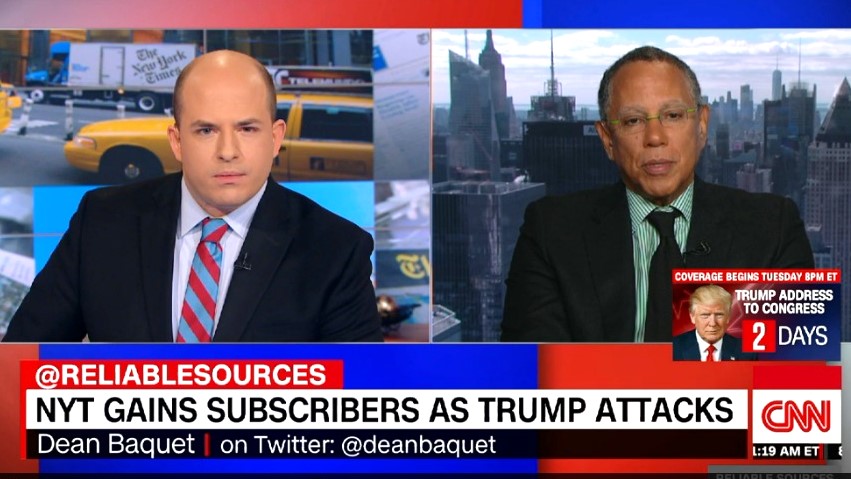 BRIAN STELTER: Let's clear it up right away, Dean. Is The Times failing? Why does he say it? What are the facts?

DEAN BAQUET: We're not failing at all. In fact, our digital subscriptions are going through the roof. Even print subscriptions are up. We're a profitable company. We're a news room that's hiring. I mean, we're big, vibrant, important newsroom. I think -- I think the reason he goes after us, to be frank, is I have to say, I think there's an effort by this administration to minimize the press.

Stelter then turned to his favorite schtick, that Trump criticizing the liberal media is a sign of impending dictatorship:

STELTER: Do you think these are authoritarian tendencies the way some outsiders have suggested they are?

BAQUET: I'm not going to go that far. I'm going to hold onto my newsroom hat of not characterizing things that way. But I think it's troublesome. I think it's dangerous. I think it means that all the institutions including the press and particularly The New York Times whose job it is to ask hard questions, if he continues doing what he's doing, he's attempting to make that harder to do.

It will not be harder to do inside our newsrooms. We're going to ask hard questions. We're going to continue to be tough analysts and reporters about the Trump administration and its actions, fair and tough analysts. But I think he clearly wants to convince his supporters that we're not to be trusted. And he's wrong.

Then Stelter gushed: "When he tweets about your company, does that help subscriptions? Is Trump the best thing to ever happen to the Times subscription strategy?" Baquet naturally agreed.

Only near the end of the subscription did Stelter working at the Times "years ago." That's a tiny bit misleading. The Times hired him straight out of college in 2007 and he worked there for six years until being hired by CNN in 2013. He clearly still favors his first post-college employer, and would have made it to CNN at the ripe old age of 28 without them.

He asked about why the newspaper needs to use anonymous sources, but didn't ask: if the Times felt (feels) it is its journalistic mission to destroy Trump, why should we trust them they're not using their left-wing buddies and giving them the disguise of nonpartisanship through anonymity?

Stelter threw one softball from the right, which we could paraphrase as "here's the right-wing take, feel free to dismiss it as uninformed."

STELTER: I think a lot of Trump supporters were saying 'Why weren't you doing that for eight years when President Obama was in office? Why have you all suddenly discovered your mission?'

We've been tough on all presidents. It's not -- this is not a new phenomenon. The new phenomenon is maybe we have a president who doesn't understand that that's our role.

That's the best example? A burp about Daschle? Baquet couldn't even accurately remember what happened. Daschle failed to pay hundreds of thousands of dollars in taxes on a car service provided for him as a lobbyist. The Times covered that for less than a week in the first week of February in 2009, and Daschle bowed out. The Times did editorialize that Daschle should go, since wealthy liberals should always be shamed into paying their taxes.

Earlier on CNN: I told Stelter the Times has "all the restraint of a pack of flesh-eating zombies."