Giddy WashPost Suggests 'SNL' Can 'Destroy' Spicer, Even Get Trump to Resign 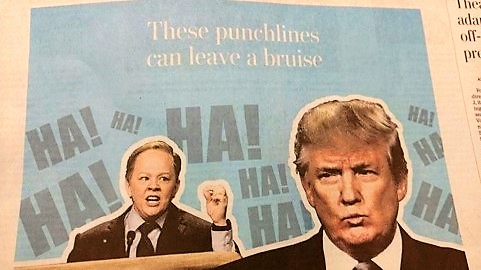 The Washington Post is joining the liberal chorus of wishful thinkers that Melissa McCarthy’s Sean Spicer impression might damage Spicer and Donald Trump. The headline was "These punchlines can leave a bruise: Anti-Trump comedians can't wait to take aim now that Melissa McCarthy's biting Spicer sendup has reportedly gotten under the president's skin."

Post reporter Elahe Izadi – who pitches herself as a stand-up comedian on the side – set out to promote anonymously-sourced stories of Trump unrest over the skit, and find leftist comedians who wished and hoped the NBC comedy show could convince President Trump to resign. Izadi oozed:

Yes, a late-night comedian’s performance could affect what Trump does as president — and this is exciting some anti-Trump comedians.

“I was just so excited to hear he was upset about it, because it feels like comedy is a weapon that we can use against them, that they don’t have,” said standup comedian Nikki Glaser.

Izadi didn’t mention that at this point eight years ago, SNL was lamely impersonating Obama with white cast member Fred Armisen. They certainly weren't satirizing press secretary Robert Gibbs as out of control or David Axelrod as the Grim Reaper. Izadi suggested Trump is the one president who’s gone public with a critique:

Late-night comics lampooning a president is nothing new, particularly on SNL. The NBC show has done a better job with some White House occupants than others, but if any other heads of state were upset by these portrayals, they kept their criticism private.

Not Trump. And this signals an opening for professional comics opposed to his agenda.

“This is the world’s greatest roast with the most serious consequences in the history of our country,” said longtime standup comic Andy Kindler, who roasts the comedy industry in an annual address at the Just For Laughs festival. “This is a classic situation where the more the target shows weakness, the more the target needs to be prodded. That’s why I think Alec Baldwin is having the time of his life.”

“His comebacks are so weak,” Kindler added of Trump. “I hope it keeps going. I hope it makes him resign.” 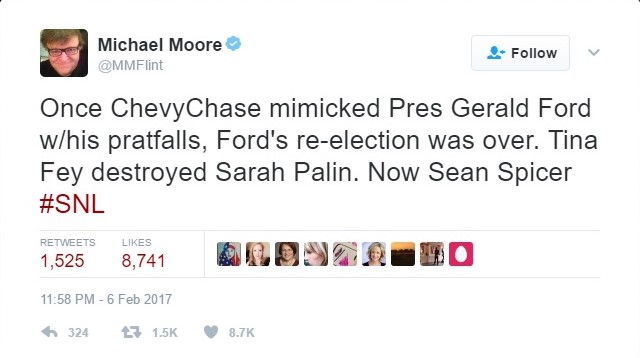 TV writer Alan Sepinwall suggested that SNL go “full drag king on the whole administration,” that Alec Baldwin surrender the Trump character to a rotating cast of women such as Meryl Streep. (Why stop there? How about Rachel Dratch as chief of staff Reince Priebus? SNL hosting veteran Candice Bergen as national security adviser Michael Flynn?) Streep, who got under the president’s skin with her lacerating speech at the Golden Globes last month, has never hosted SNL — but she already has played Trump.

PS: When SNL decided to shake things up in October 2009 and have Armisen's president declare that Obama had accomplished “nothing, nada,” CNN sought out PolitiFact guru Bill Adair to scold the comedians for “getting it wrong.”