On Friday's week-in-review segment on the PBS NewsHour, everyone was disparaging Donald Trump -- anchor Judy Woodruff, liberal analyst Mark Shields, and pseudo-conservative David Brooks. They mocked Trump as childish for calling Sen. Charles Schumer the "head clown" of the Democrats. Shields weirdly lectured: "Chuck Schumer is a proud and able and dedicated and skillful leader, and you don’t want him as an opponent." So Schumer won't be an opponent to Republicans if you talk nice?

First, Shields insisted Trump is defying every historical pattern in having thank-you rallies for "self-gratification" and disparaging his defeated opponent, not allowing that the opponents -- including the tapxayer-funded ones on "news" shows -- never shy away from disparaging him: 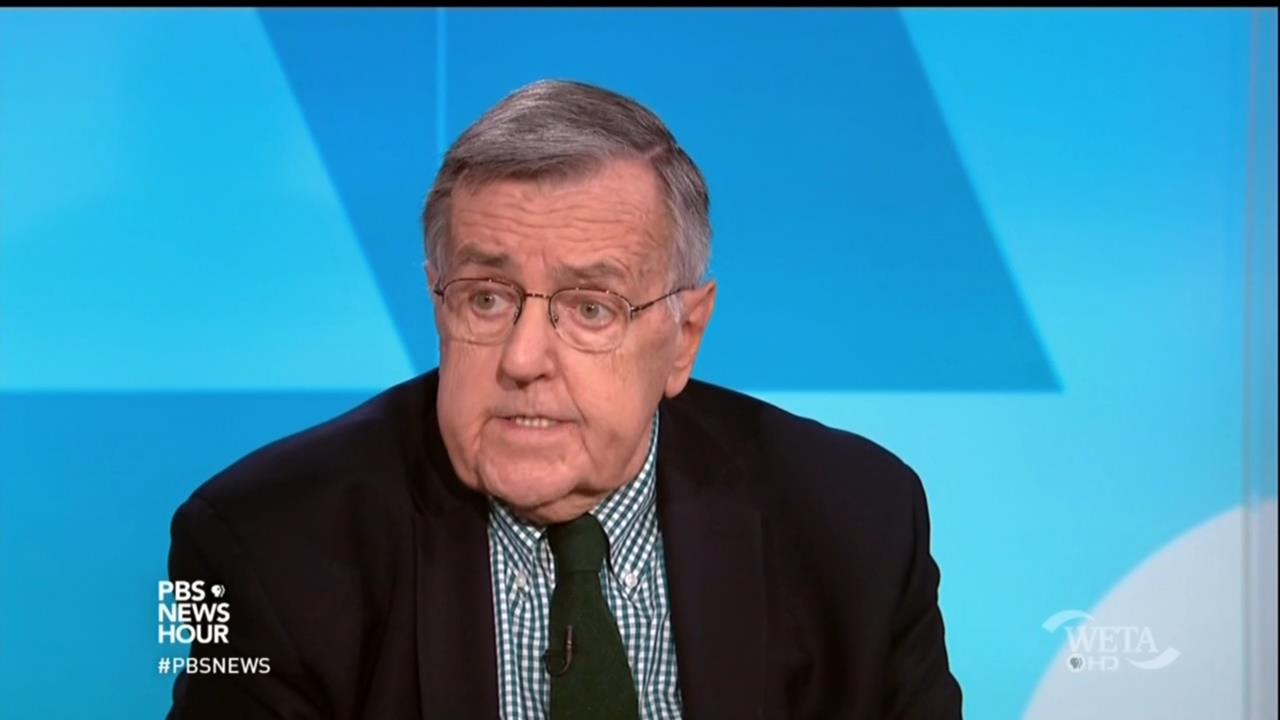 SHIELDS: Judy, I have lived through an awful lot of transitions from an election to inauguration. It is a period during which president-elects follow a pattern. They become more popular. What they do is, they submerge partisanship. They reach across the line. They do all sorts of symbolic things to unite the nation.This president-elect has done just the opposite. He continued his rallies, apparently for self-gratification. He fired up his true believers. He continued to disparage and belittle his defeated opponent openly.

And toward what end? There’s been no symbolic reach. He’s had interviews, I guess, with Heidi Heitkamp, the Democratic senator from North Dakota. But there’s been no sense of any strategic sense of where the country is going or what it’s about. Here he is tweeting about Arnold Schwarzenegger’s ratings on The Apprentice?

MARK SHIELDS: He’s interfering? He’s making 12 calls into Ohio to defeat John Kasich’s Republican state chairman in the Republican state committee vote.This is pettiness. And this is — this shows just no largeness of vision. And it’s really distressing.

Then Woodruff turned the subject to Schumer being called a clown:

JUDY WOODRUFF: And, yesterday, David, in conjunction with this, he tweeted another criticism, I guess, of the Senate Democratic leader, Chuck Schumer. He called him the head clown in talking about the way the Democrats are handling Obama. I did interview the vice president yesterday, who looked right into the camera and said, "grow up, Donald." You know, is that the kind of comment that’s likely to make a difference, do you think?

DAVID BROOKS: Yes, I’m sure Donald Trump is growing and maturing as we speak.

But if Trump is childish, and needs desperately to grow up, shouldn't we look at the childishness on the PBS week in review? Let's make a little NewsBusters list of recent PBS civility breakdowns:

-- David Brooks slamming Trump voters: "People are just going with their gene pool and whatever it is."

-- Woodruff identifying Clinton smears as a positive sign for her campaign: "She's talking a little bit tougher on the campaign trail -- comparing how Republicans view women with how terrorists view women. Is she -- is she turning this around?"

-- Mark Shields mocking Republicans as clowns on foreign policy: "Scott Walker, who is a governor of Wisconsin, whose idea of foreign policy is beat Ohio State, and Chris Christie, whose trips to Chinatown and Little Italy have qualified him for foreign policy." (This in the same segment where they assaulted the GOP for "bad manners.")

-- Brooks mocking the Republican presidential contenders on the debate stage in 2011-12 as "Looney Tunes."

That's what makes Shields sound ridiculous in finding a Schumer putdown on Twitter to be the essence of childish pique. Woodruff could not get over this affront! She cued up Biden to decry it, then cued up Shields and Brooks:

JUDY WOODRUFF: So, when he calls Chuck Schumer the head clown, Mark, we just ignore it, or…

On the Joe Biden interview, of all sad words of tongue and pen, these are the saddest that might have been. [Translation for those who missed poetry class: too bad Joe didn't run instead of Hillary.] We went through an election where we had the two least-liked nominees in the modern history of American polling.

And you could not watch the interview — and I commend you for it last night — with Joe Biden without saying, I like this guy. I mean, he is a thoroughly likable man. And when he says, grow up, I mean, it wasn’t said — there was nothing mean about it. It was just — it was absolutely what a grownup would say. This was a grownup talking.

And the way I thought he talked about Democratic values was missing in the campaign of 2016, sorely to the Democrats’ disadvantage, it was just a — it was a marvelous — I commend it to anybody who missed it for any reason to watch it online.