The Washington Post easily proves it's a secular liberal newspaper at Christmas time. On Friday, the Post promoted a "dragapella" quartet mocking Christmas (and the incoming administration) in two different sections of the paper, in the Style section and in the Weekend tabloid. In Style, theatre critic Celia Wren hailed the Kinsey Sicks and their show "Oy Vey in a Manger!" at the D.C. Jewish Community Center. 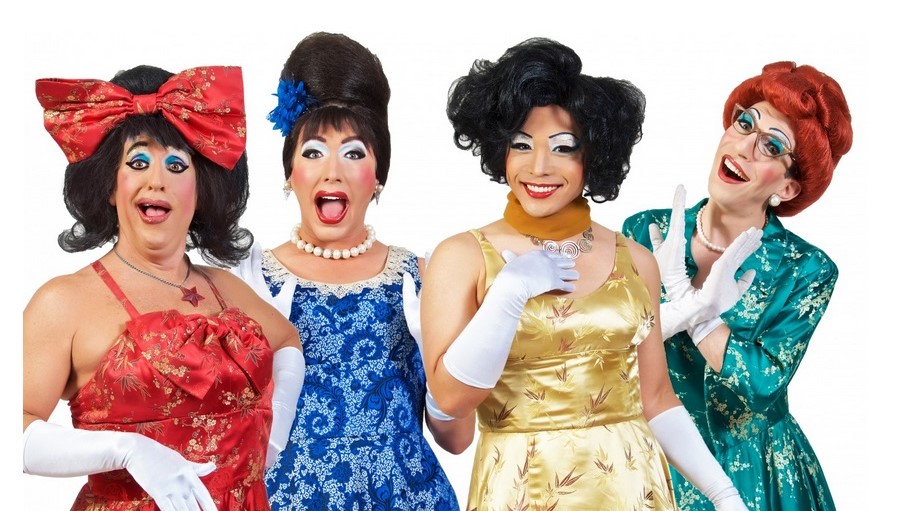 In between cleaning and gossiping about their love lives, the gals (who are decked out in party dresses, with gloves) share a cappella versions of seasonal favorites such as “God Bless Ye Femmy Lesbians,” “I Had a Little Facial” and the ribald “Lusty the Snowman.” No sacred cow is too delicate for this foursome to rope into a rodeo of spoofery. Most major religions come in for at least one dig — in some cases, in connection with the fact that Rachel and Winnie are Jewish, and Trampolina and Trixie, Christian. Even the history of the Donner Party becomes fodder for song (“Soylent Night”).

"Most major religions"? No "sacred cow is too delicate"? Let's guess Islam got left out, since satirizing Islam leads to a fatwa. It certainly doesn't lead to a favorable review in liberal papers. The drag queens specialize in "progressive subversive humor," like mocking the allged racism and anti-Semitism of Team Trump:

For instance, the current show includes several arch references to Stephen K. Bannon, incoming White House chief strategist and senior counselor. (On one occasion, if memory serves, the name “Bannon” rhymes with “let the Klan in.”) With a nod to the next administration, a musical number — performed soft-shoe style, with silver canes in hand — celebrates the ascendancy of “All the White Faces.” And a spoken toast salutes “The next leader of the free world: Vladimir Putin!”

The characters’ personalities dovetail artfully with the show’s topicality. For example, in one of her many unguarded moments, Rachel confesses to seeing the bright side of any anti-Semitic rhetoric that may be mainstreaming at the present moment. “All that fleeing for my life is so slimming!” she exclaims.

The group's leader Ben Schatz, wisecracked in a separate promotional piece in the Weekend section by Kristen Page-Kirby:

“Satire involves exaggerating a kernel of truth. How do you exaggerate what’s happening now? But I think, like Donald Trump, we have sunk to the occasion.”

....“I very much doubt Mike Pence will attend,” Schatz says. “But I’ll pay him if he sits through the whole thing.”

Tickets for this show are $47. They offered a little more political analysis in the gay DC weekly magazine Metro Weekly:

“With the rise of Trump, a lot of us on the progressive side, are using comedy as an outlet to vent our frustrations,” says Jeffrey Manabat, who has portrayed Trixie for the last 14 years, following in the footsteps of two Trixies before him. “Our fears about the incoming administration, what they may do to our country, our safety, our standing in the world. All the progress that we’ve made in the last few years, if not decades, on so many different levels…. It is terrifying to think about what can happen. But for us, the terror feeds our art, our comedy, our music, our scripts, our shows. We’re able to turn that into something that hopefully alleviates some of that fear. It gives us some levity, and brings communities together.

“We needed to laugh after the devastation of the election. I think there’s going to be a lot more devastation headed our way, and our role now is being more clearly defined by what is coming up against us.”