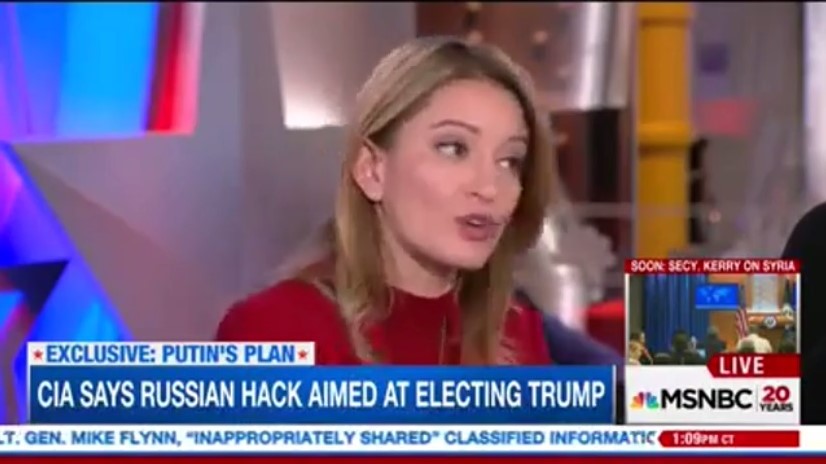 Ian Schwartz at Real Clear Politics underlined why Donald Trump correctly felt NBC reporter Katy Tur was hostile to him on the campaign trail. On Thursday afternoon on MSNBC, Tur and MSNBC anchor Thomas Roberts argued by defending himself against anonymous claims hiding behind the term “intelligence community” that Russian hacking “swayed the election” in his favor, Trump was putting Russian strongman Vladimir Putin “before the American public.”

Now imagine someone claiming that when Barack Obama defended himself against a conservative media narrative – let’s say on Iran – that Obama was putting Iran before the American public. MSNBC  would smell racism and probably a “birther” angle, that somehow Obama wasn’t American. But with Trump, anything goes to spin for the Democrats:

THOMAS ROBERTS: We have to question the America First model of Donald Trump because he's, right now, putting himself to doubt the U.S. intelligence and putting Putin first.

KATY TUR: He's putting Donald Trump first before America first and Donald Trump is somebody that would be potentially a negative -- affected negatively if this turns out to be true and if the public entirely believes if this is true.

And in the other sense, yes, he is putting Putin before the American public, siding with them, saying absolutely, they had nothing to do with it, there is no evidence. You cannot prove it unless you find somebody in the middle of hacking.

He's not siding with the U.S. intelligence community. He's going at them, he's criticizing them. He's saying these are the same people that decided that Saddam Hussein had weapons of mass destruction. So he's already trying to undermine their authority and their credibility.

He's going to have to go work with them, though. And he's going to have to find a way to get on the same page. Because the intelligence community is -- they're going to be responsible for briefing him every day, for what’s going on overseas. He’s their number one customer.

This is how the liberal media try to inflate their own authority and credibility. They use anonymous government sources and then insist that when you attack their ginned-up hit jobs,  you’re undermining  the government.  What would it look like if the anonymous sources were publicly named, and the public could judge their political or career motives?  The “intelligence community” could be Obama’s CIA director John Brennan, as many suspect, a Democrat appointee spinning for the Democrats right before the Electoral College votes.  That’s why the anonymity can be a very secretive and dishonest tactic.