The polite liberal bubble – where they are constantly upset about the incivility of Donald Trump but see themselves as the Essence of Reasonableness as they wail about impending dicatorship – is still full of hot air about Trump tweets. On Friday’s PBS NewsHour, anchor Judy Woodruff asked her regular columnist panel about his failure to stop tweeting.

JUDY WOODRUFF: The other thing we saw a little bit more of this week, David, was this continuation of Donald Trump tweeting criticism of Boeing aircraft over the cost, what he says may be the cost overrun for the new Air Force One, and then getting into a spat with a local union president in Indiana who had said, you know, you’re not really going to be saving as much jobs at the Carrier Corporation as you said you were.

DAVID BROOKS: Yeah, a friend of mine who’s a political strategist in town said to me, you know, half my conversations are about the descent of fascism in America, and maybe that is going to happen, and then half are normal policy discussions about how to reform health care.

And these tweets are to me one of the telltale signs of whether we’re going off in that direction. If he’s just tweeting about a union guy, then he’s just being the bully we have seen. But if he uses the power of the presidency to back up some of those tweets and he’s really, really coming down with a hammer on people he doesn’t like using the power of the presidency, then we’re seeing something very new and very different.

And it’s too soon to tell whether he is going to start doing that, but that, to me, would be an indicator of something very troubling, if he does that as president. 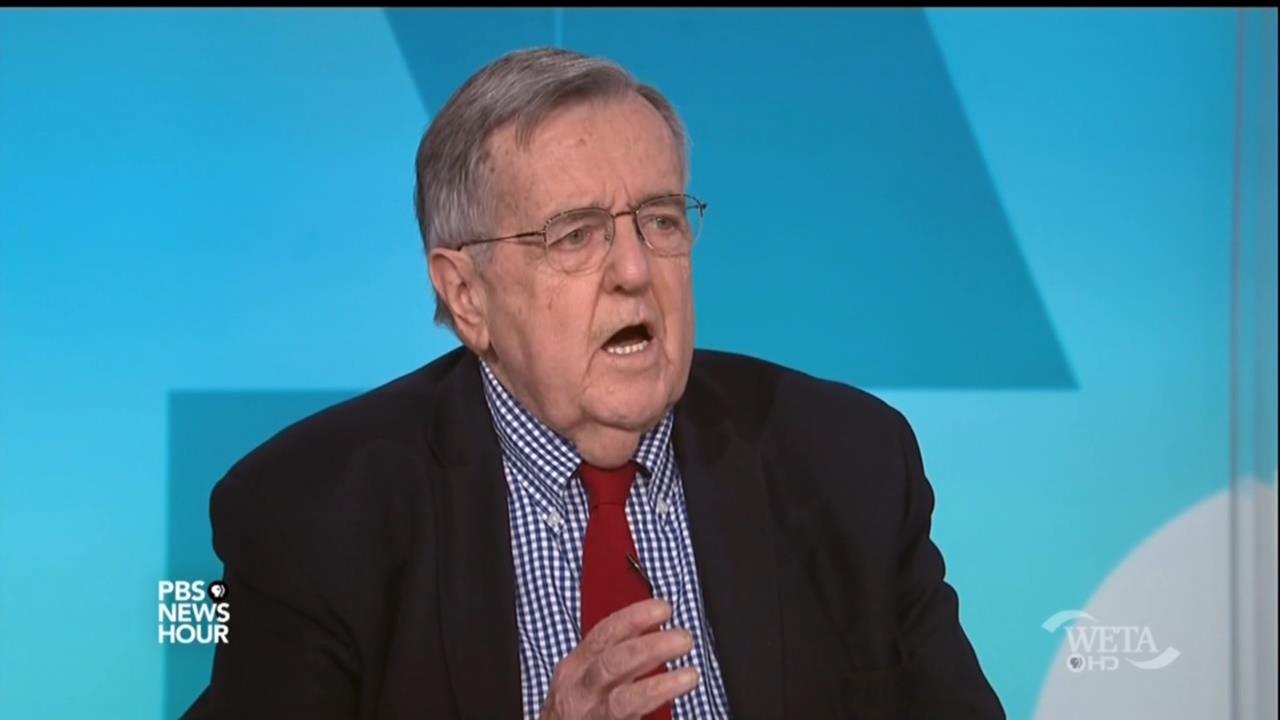 JUDY WOODRUFF: What do you see?

MARK SHIELDS: Well, cyber-bullying, the emphasis on bullying here, going after Chuck Jones, the president of Local 1999 of the Steel Workers, is punching down. It’s somebody in a powerful, omnipotent position punching somebody who’s a lot less important, and putting them not only as the object of ridicule, but open threats that Chuck Jones has received as a consequence of the president doing this — president-elect doing this.

And he just doesn’t seem to grasp or understand, Mr. Trump, the majesty and the power of the office. And I think Bob Dallek, the [liberal] presidential historian, very respected, said that this behavior is beneath the dignity of the office. And it really is. And I don’t think he grasps it and understands it, the Boeing thing being one example, where you can move stock by just an idle comment. But it’s intimidating. It’s silencing. It’s a chilling effect. And it’s decidedly unpresidential.

Can you believe this? Barack Obama is preparing again this week for a Comedy Central interview, and Shields is mocking Trump as unpresidential – before he’s even president.  Brooks actually disagreed:

BROOKS: To a lot of people, it just seems like an active presidency, like he’s being active on behalf of the American people. And I do think, oh, the Carrier thing, I hated it as a policy matter, but at least he’s hammering — he’s saving jobs. He’s doing stuff. Obama never did any of this stuff. People have a different conception of what the presidency should be.

Earlier in the segment, in discussing Oklahoma Attorney General Scott Pruitt, Trump’s pick to run the EPA, Shields mocked Oklahoma as no “vanguard state” for the environment:

SHIELDS: And when you think of pristine preservation of America, you immediately think of Tulsa and Oklahoma.

WOODRUFF: Be careful, my birthplace. (Laughter)

SHIELDS: I know it's your birthplace, Judy. But let's be very frank about it. It hasn't - it's not a vanguard state. It's not a forefront state in environmental protection.

It's a state that has been very big on fracking, that has had 907 earthquakes in the last year, which is more than they had in the last 35 years, under fracking, a 3.0-magnitude. And I would say, if he's not a denier of climate change, then Attorney General Pruitt is certainly a serious skeptic.

BROOKS: I rise to the defense of Oklahoma. (Laughter)

WOODRUFF: Thank you. I'm glad to have one of you.

BROOKS: And it's exactly the sort of coastal condescension toward the beauties of Tulsa that has created the Trump phenomenon in the first place.