Who's More 'Authoritarian'? Trump or the Media Elite That Wants Him to Shut Up? 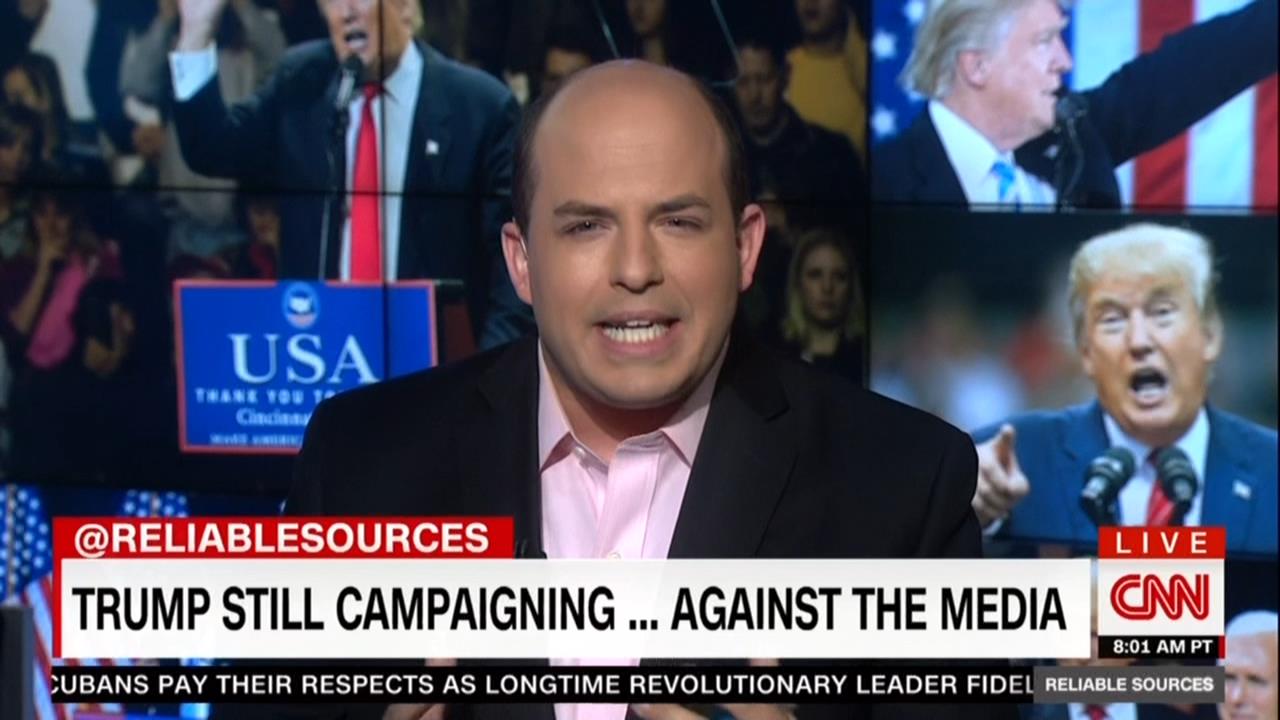 When Harry Truman said “If you can’t take the heat, get out of the kitchen,” he was probably talking to politicians, and not to the press. But it’s become quite obvious in the nascent Trump era that the press simply cannot take the heat. Criticizing the press isn’t fair game. It’s a dangerous sign of an undemocratic temperament.

On Sunday’s edition of the CNN Trump-trashing show called Reliable Sources, host Brian Stelter insisted that the media needed to define Trump as a dictator, not a president: “I talk to international correspondents who say to you, ‘This is exactly what authoritarians do. This is what strongmen do. This is what happens in authoritarian regimes.’ I think we need to start using those words on TV, at least, to discuss the possibilities before us.”

Stelter touted former CNN anchor Frank Sesno writing for The Hill, plucking out this advice to the media (or in this case, to Trump):

4. Respect the adversary. The adversarial nature of the press — which Trump doesn't like and takes personally — is the cornerstone of a free press. It is the a bedrock principle by which we hold the powerful to account and ferret out incompetence, hypocrisy and corruption. Thomas Jefferson was treated that way. So was Abraham Lincoln. And Ronald Reagan. They didn't like it, but it was power's price of admission.

Among the most dangerous sounds to come out of Trump's mouth has been his disrespect, not just for individual journalists, but for journalism itself. Turning reporters from adversaries into enemies, inciting the crowd to the point that some reporters needed personal security protection during the campaign is the kind of horrific thing we expect to see in Venezuela or Russia or Cuba.

Never in the United States of America.

Stelter and Sesno never found it bizarre in the Bush-Cheney years when the press treated the Bush-Cheney team as a dictatorial Darth Vader brigade. Liberals in the press singled out the president's administration as more of an enemy, than...the Iraqi enemy,  or the al-Qaeda enemy. Or they openly smeared the two together. Even now, Keith Olbermann is calling his latest video rantfest "The Resistance," like Trump is Hitler, and back in his heyday, openly suggested Fox News was like al-Qaeda.

Besides, this is rich coming from CNN, the channel founded by Ted Turner, who kissed up to the worst communist dictators (on air and off) from Fidel Castro to North Korea's Kim Jong Il; the channel that executive Eason Jordan confessed had a Baghdad bureau under Saddam Hussein before the Iraq war that buried more news than it reported; and the channel of Peter Arnett wrongly claiming U.S. armed forces  bombed baby-milk factories in Iraq and used sarin gas in Laos. It’s the channel that cheated and let Donna Brazile leak "town hall" questions in advance to her allies in the Hillary Clinton campaign. So when Donald Trump bashes CNN as dishonest, he has plenty of evidence.

This is an ongoing CNN theme. After Trump's rally in Cinncinati, CNN's Dana Bash insisted “There were lots of divisive comments, especially and unfortunately about the press, which I wish he would stop doing, not only because we are members of the press, but because as leader of the free world, you do set an example for free press in countries around the world, and so––I just––he can’t help himself there and I just wish he would figure out a way to stop doing that.”

But which is more authoritarian? A president that criticizes the press? Or a press that insists that the president must shut up and never criticize the press? Is it "disturbing" and un-American when Dana Bash rudely criticizes an institution, like Congress?

When Barack Obama (and Bill Clinton before him) pummeled Fox News as a blight on America, did any liberals smell a whiff of authoritarianism? No. But when a Trump crowd chants "CNN Sucks," it's automatically an "authoritarian" crowd of proto-fascists.

Other than criticize the press, what exactly has Donald Trump done to drag out the "authoritarian" designation? Let’s review:

1. He took credentials away from the press. The Washington Post called this an “authoritarian press ban” and then explained “The action made it harder for these outlets to cover Trump rallies and other events, forcing them to enter arenas with the general public, as opposed to gaining smoother entree to media areas.” Since when is added inconvenience akin to authoritarianism? Post media reporter Paul Farhi wrote several stories noting just how elastic Trump's "ban" of the Post was, including his granting interviews for their Trump-trashing biography.

Even as liberal reporters admitted President Obama was the most press-hostile president in modern history, the Stelters didn't drag out the A-word for his anti-press record.

2. He professed interest in reviewing or tightening the libel laws. This is Trump wanting to be unpredictable and keeping his adversaries off-guard. Maybe he wanted them to fly completely off the handle and demonstrate again their overweening egotism they were the Unmatched Essence of democracy. The Republican platform didn’t have a libel plank. Instead, it boasted America was exceptional because it was an "exemplar of liberty for the world to see."  It did have a plank on the First Amendment that professed a distaste for speech-curtailing “campaign reform” laws like McCain-Feingold and mandatory union dues. On those issues, the liberal media  think “money isn’t speech” and favor strict regulation  – an “authoritarian ban”? – in a way that favors the Left.

3. He favored conservative-media outlets, especially Fox News and Breitbart News. As if Obama didn't favor the most effusively pro-Obama outfits? Now imagine that President Trump decided to rearrange the White House Briefing Room seats, and grant the front row to say, Fox News, the New York Post, Breitbart, CNSNews.com, the Daily Caller, TheBlaze, and NewsMax. Would that be “authoritarian”? CNN would surely freak out.

But conservatives feel like ABC, CBS, NBC, CNN, NPR, The New York Times, and The Washington Post is a partisan murderer’s row for Republican presidents – and they never forget unhinged Helen Thomas raging from the front row. When President Obama called on The Huffington Post in his first press conference in 2009, Time magazine oozed it showed “he is not averse to working with those outside the establishment” and “a way of reaching straight into his base.” Doesn't that sound just like Trump's campaign?

Here is the problem: the liberal press thinks they are the only press, and conservative media outlets are "fake" news outlets. Or they're too opinionated and promotional to be "real news" (that one takes remarkable feats of self-deception). As Dana Bash was imploring Trump to shut up about the press, the Washington Post political correspondent Chris Cillizza was tweeting this:  "Boo the press if you want. Then imagine what society would be like without a free press." But why isn't Breitbart and NewsBusters the "free press," too? Critics of the liberal press are also signs of a free press and a First Amendment.

4. He converted public-broadcasting channels to be his personal megaphone? Not. Notice “authoritarian” Trump campaigned for months without ever discussing reform of PBS or NPR. In any tinhorn dictatorship, the first move would be to take over the government-funded press. But anyone witnessing a PBS or NPR interview with Barack Obama would notice the extreme deference he received from these networks – as if they were his personal megaphone.

Mitt Romney was eaten alive in 2012 for suggesting the privatization of Sesame Street -- and now they're an HBO show that airs eventually in stale reruns on PBS. Liberal hypocrisy about their taxpayer-subsidized media sandboxes never ends.