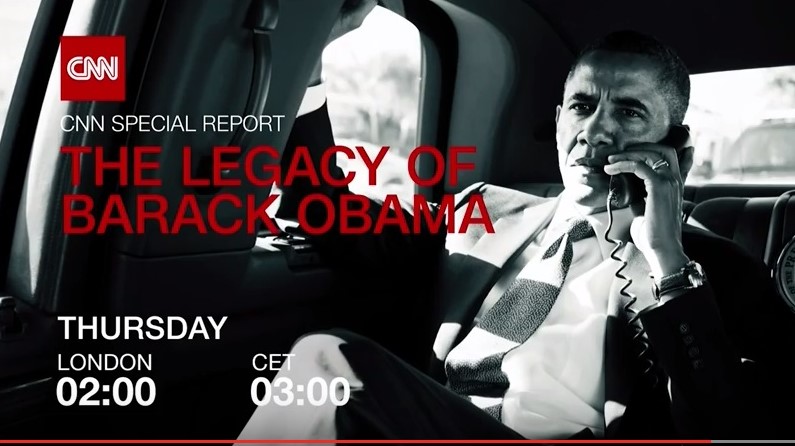 Before CBS offers America a primetime Oprah Winfrey interview with Michelle Obama -- an Obama supporter still promoting the Obamas and their legacy -- CNN is offering another version. Obama adviser Fareed Zakaria is interviewing Barack Obama in a two-hour primetime special on December 7 called The Legacy of Barack Obama.

Conservatives and Republicans would have a very negative take on that title -- so CNN is skipping over all of them. The only viewpoint allowed is that Obama is historic. The CNN press release has a preview: "Zakaria asserts that President Barack Obama brought dramatic policy changes to the American landscape, and he argues that the ambitious Obama Presidency may be among the most consequential in history. "

Obama's opponents were only "unprecedented" in their antagonism. The special "examines the historic election of America’s first African-American President, the impact of the gridlock that haunted his tenure, what he achieved in the face of unprecedented opposition, and the vexing problems he was unable to solve."

In the ad, an announcer gushes: "He led America through a time of crisis, bringing the economy back from the brink! And against all odds (flash to Tea Party rally yelling 'Kill the bill!'), he provided health care for millions! CNN’s Fareed Zakaria talks to the president about both the triumphs and the tragedies."

Zakaria illustrates the behind-the-scenes concerns and strategy that yielded President Obama’s comprehensive healthcare legislation – a feat that had eluded seven previous presidents, his personal struggle with the racial strife that rocked his years in office, the rescue of the global economy, the historic deal with Iran to halt that nation’s march towards a nuclear weapon, the global climate change agreements, the appointment of two women to the U.S. Supreme Court, and Obama’s moves on social issues such as marriage equality for gay Americans, equal pay legislation, criminal justice reform, and more.

How can it be that CNN's pundits would mock Fox News as a publicity organ for Republicans and then air one-sided documentaries like this?

The guest list is all Obama administration vets and liberal intellectuals:

Back in 2011, as he was being buttered up by disgraced ex-Governor and CNN host Eliot Spitzer, Zakaria admitted to enjoying a series of face-to-face White House meetings with President Obama, arranged through Obama national security adviser Tom Donilon. Then he denied this was "advising" the president -- it was merely meeting with Obama and shooting the breeze.