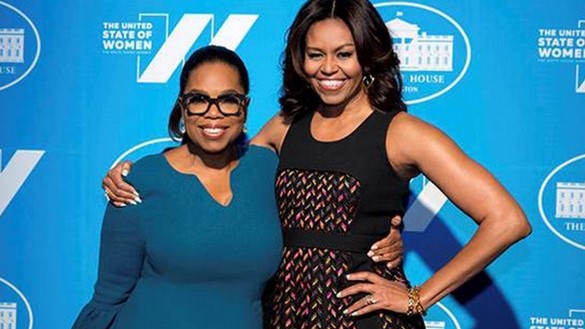 The taped special will include the usual smoochy softball topics: Mrs. Obama’s eight years as First Lady, her plans for the future, and her hopes for the Obama legacy. It probably wouldn't be any stronger an interview if CBS put its in-house Obama fan/Oprah pal Gayle King to play journalist on the special.

Deadline added “CBS’s debut of the taped interview is scheduled for little more than a week ahead of its Kennedy Center Honors broadcast, at which FLOTUS and President Barack Obama, making their final appearance at that annual event, received a long standing ovation.”

Winfrey famously endorsed Barack Obama for President in May of 2007, speaking for him at rallies: "You know Dr. King dreamed the dream. But we don't have to just dream the dream anymore. We get to vote that dream into reality."

This certainly meant more than the actual donations she made to his campaign: $2,300 in 2007 and another $5,000 in 2012. In 2012, Winfrey also doled out $33,178 in donations to Democratic Party organizations in seven battleground states (Colorado, Iowa, Nevada, New Hampshire, Ohio, Virginia, and Wisconsin). It sounds like a Barbara Walters-style interview, but at least Walters didn't put her money on her interview subjects.

Right after the Inauguration eight years ago, Oprah struck this tone on her daytime show:

Wednesday’s post-inaugural edition of The Oprah Winfrey Show, taped at a Washington restaurant, overflowed with strange and messianic notions about Obama and how the thrill over him is unanimous. Actor Forest Whitaker summed it up for Oprah: "The light of the New Age is here." Oprah pal Gayle King passed along her agreement with a message that "Not only does he hear us. He feels us. That when I hear Barack Obama, they said, he talks to my soul." Whitaker also strangely claimed "we’re not used to seeing" a president and a First Lady who love each other, but the Obamas have signaled "it’s okay to love."