Mediaite pulled out the funniest part of Barack Obama’s latest softball interview with Rolling Stone publisher Jann Wenner.  When asked about Donald Trump’s victory, he blamed part of it on “Fox News in every bar and restaurant in big chunks of the country.”

Let’s not wait for PolitiFact to judge whether Fox News is actually on the TV set in every bar and restaurant in the red states. (They won’t.) Conservatives on Twitter quickly made several apt points: 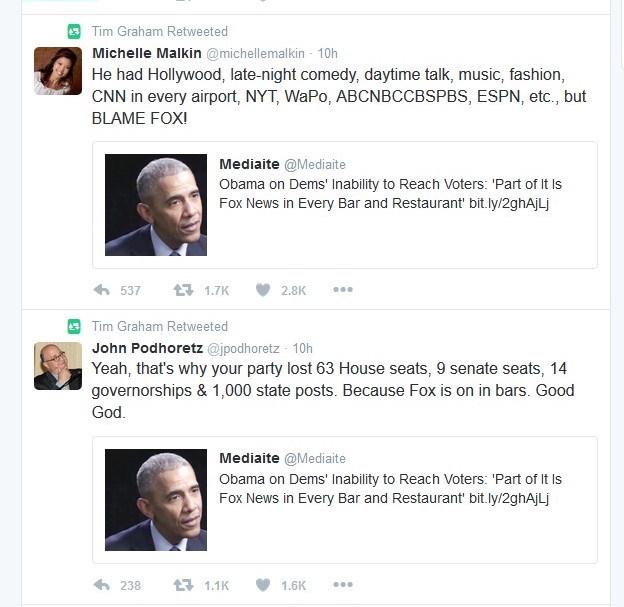 In this election, [white working class voters] turned out in huge numbers for Trump. And I think that part of it has to do with our inability, our failure, to reach those voters effectively. Part of it is Fox News in every bar and restaurant in big chunks of the country, but part of it is also Democrats not working at a grassroots level, being in there, showing up, making arguments. That part of the critique of the Democratic Party is accurate. We spend a lot of time focused on international policy and national policy and less time being on the ground. And when we’re on the ground, we do well.

There’s a slam on the Clinton campaign, that they weren’t “on the ground.” But weren’t both Obamas on the campaign trail, too? Was Obama failing to be “on the ground” throughout his second term, since Democrats also took it on the chin in 2014? Obama also seemed to suggest that sharing your policy genius with the elitists at The New York Times doesn't win elections:

I think it is really important for us, as progressives – set aside the Democratic Party as an institution, but just anybody who wants to see a more progressive America – to think about how we are operating on the ground and showing up everywhere and fighting for the support of folks and giving them a concrete sense of what it is that we think will make their lives better, rather than depending on coming up with the right technocratic policies and sharing that with the New York Times editorial board. 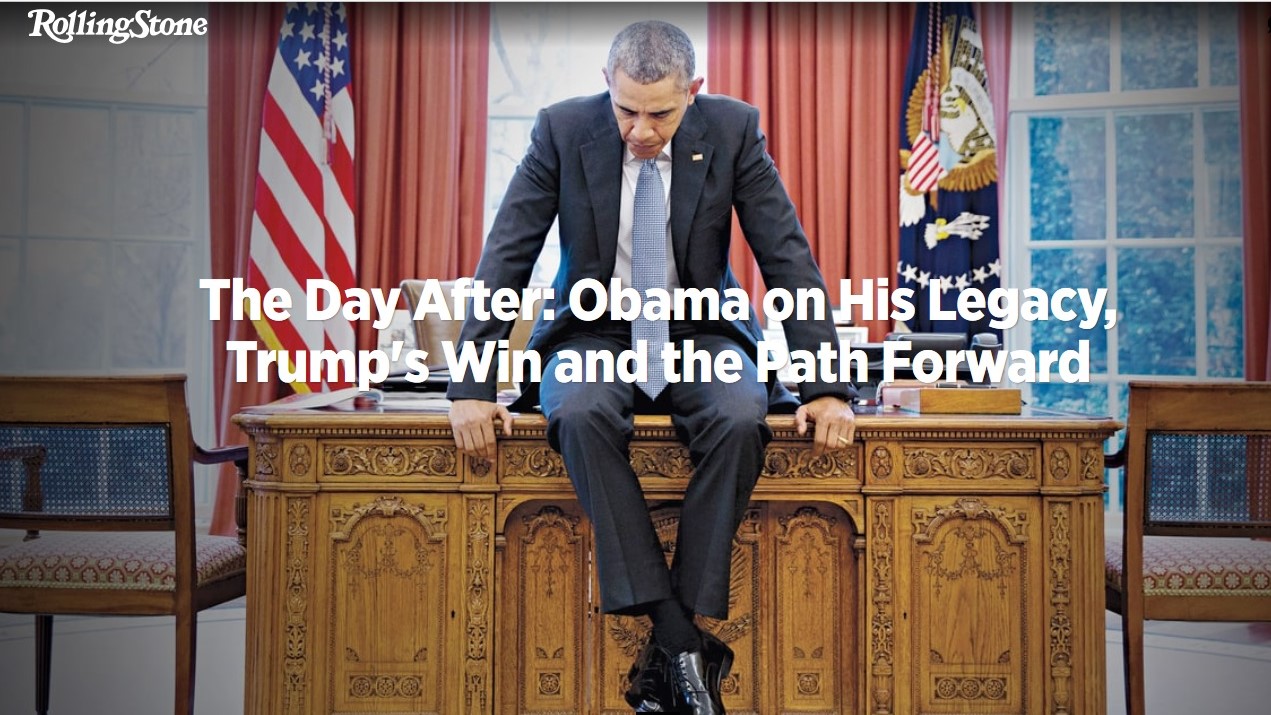 Wenner even proposed government subsidies for the news business! "Maybe the news business and the newspaper industry, which is being destroyed by Facebook, needs a subsidy so we can maintain a free press?" Obama uncorked another laugh line:

The New York Times is still making money. NPR is doing well. Yeah, it's a nonprofit, but it has a growing audience. The problem is segmentation. We were talking about the issue of a divided country. Good journalism continues to this day. There's great work done in Rolling Stone.

This is like saying Dan Rather does great work, all the time. Obama again complains there's simply too much media "ramping up divisions," the way liberals mourn for a pre-Nineties media with no Fox News and no Limbaugh and no Drudge Report:

The challenge is people are getting a hundred different visions of the world from a hundred different outlets or a thousand different outlets, and that is ramping up divisions. It's making people exaggerate or say what's most controversial or peddling in the most vicious of insults or lies, because that attracts eyeballs. And if we are gonna solve that, it's not going to be simply an issue of subsidizing or propping up traditional media; it's going to be figuring out how do we organize in a virtual world the same way we organize in the physical world.