CNN Host Amanpour Wails for Press: Let's Not Be 'Turkeys Voting for Thanksgiving!' 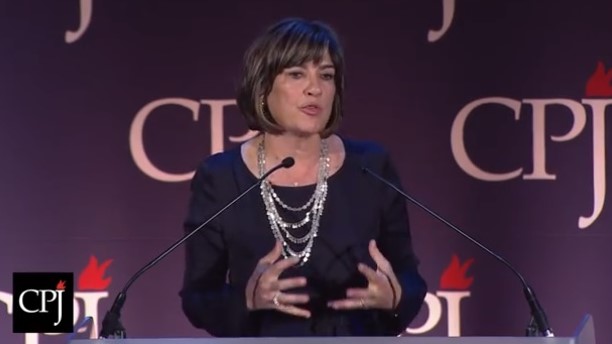 CNN anchor Christiane Amanpour made a complete fool of herself on Tuesday night accepting an award at a dinner for the Committee to Protect Journalists, founded to champion journalists endangered when reporting abroad.

She began with fear: “I never in a million years thought I would be up here on stage appealing for the freedom and safety of American journalists at home.” She ended with an even sillier metaphor, as cooked for dinner: “Let's resolve not to be turkeys voting for Thanksgiving!”

Did anyone bring a Breathalyzer machine? Check that blood-alcohol level? When did Trump or other critics of liberal bias ever propose killing journalists and cooking them? Now, democracy and a free press are incredibly endangered: "I feel that we face an existential crisis, a threat to the very relevance and usefulness of our profession."

Eight short years ago, we reported on Amanpour speaking at another dinner, for the Robert F. Kennedy Center for Justice and Human Rights. She was the polar opposite.

CNN's Christiane Amanpour, who emceed, showed her political stripes when she told the crowd that in the last few months, she'd felt like she was covering "a foreign country having its first-ever democratic election. ... When was the last time we saw the whole world come into the streets dancing in celebration of America instead of demonstrating and burning the flag?"

And back then, she compared Obama’s election to a triumph over authoritarianism (and racism, comparing Obama with Mandela crumbling apartheid):

Finding myself in New York City this U.S. election Day, I saw scenes that reminded me of the first democratic elections I covered in Afghanistan in 2004, or Iraq in 2005.

'Scenes that reminded me of the historic election in South Africa in 1994 when a black man, Nelson Mandela, was elected president thus ending generations of white minority rule known as apartheid.

Or 1998 in Iranwhen women and young people turned out en masse to elect the first ever reform president, the moderate cleric Mohammad Khatami.

The enduring motif from those elections were the massively long lines at the polling centers. Men and women standing patiently, sometimes for hours, to cast their first ever vote for a hopeful secure future....

No election has electrified the U.S. like this since 1968. But the whole world wishes it could cast a vote in this one. Whatever happens, this U.S. election will change the world. Stay tuned.

Days later, she was still having a thrill up her leg in an interview with Jay Leno:

I live in New York at the moment. And I was just stunned by the reaction. I don't think there's ever been such a reaction for a political event, such a happy reaction, people spilling onto the streets, you know, dancing, singing, high-fiving with the police. I – you know, as a foreign correspondent, who’ve covered many, many elections around the world, to me it looked like a country, a foreign country having its first-ever democratic election. Reaction in the streets were amazing.

Nothing came up about how Obama would need media to hold him accountable, or that he might oh, set a new record for investigating journalists in leak probes. The CPJ itself sounded the alarm, noting then-New York Times public editor Margaret Sullivan wrote “it’s turning out to be the administration of unprecedented secrecy and unprecedented attacks on a free press.”

But now that Trump is poised to repeal parts of Obama's legacy and dare to criticize the liberal media for its partisan propaganda, America is suddenly Amerikkka (full transcript here):

I was chilled when the first tweet after the election was about "professional protesters incited by the media."

We are not there but postcard from the world: this is how it goes with authoritarians like Sisi, Erdogan, Putin, the Ayatollahs, Duterte, et al.

As all the international journalists we honor in this room tonight and every year know only too well:

First the media is accused of inciting, then sympathizing, then associating--until they suddenly find themselves accused of being full-fledged terrorists and subversives.

Then they end up in handcuffs, in cages, in kangaroo courts, in prison--and then who knows?

Executed? Like Tom Turkey? Apparently, America is only great if the press gets its way, that its opinions dominate and are respected, and those who challenge the media's authority make journalism unsafe:

A great America requires a great and free and safe press.

So this above all is an appeal to protect journalism itself.

Recommit to robust fact-based reporting without fear or favor--on the issues.

Don't stand for being labelled crooked or lying or failing

Do stand up together--for divided we will all fall.

There is no rhetoric more easily dismissed than liberal journalists describing themselves as "fact-based" reporters "without fear or favor." In these speeches, Amanpour is all-fear for Trump, and all-favors for Obama. In the same speech, Amanpour championed her motto of "Truthful, not neutral," which implies Facts have a liberal bias.

But what if there emerge "facts" of a crooked media? Notice Amanpour didn't mention CNN "town hall" meetings being ruined when questions were leaked by a CNN analyst to the Clinton campaign. What has she done inside CNN to "protect journalism itself?" Did she say Word One, privately or publicly, on the Donna Brazile matter? Almost nobody at CNN ever did.

On and on she went:

Like it has in Egypt and Turkey and Russia, where journalists have been pushed into political partisan corners as we see here tonight--delegitimized, accused of being enemies of the state.

Journalism itself has become weaponized. We have to stop it.

Can't we have differences without killing each other off?

In the words of the great civil rights leader, Congressman John Lewis: "Young people and people not so young have a moral obligation and a mission and a mandate to get in good trouble."

So let's go out and make some. And especially--let's fight to remain relevant and useful.

Perhaps contemplating the long weekend ahead, Let's resolve not to be turkeys voting for Thanksgiving!

In the CNN Media unit's e-mail newsletter, Brian Stelter reported this as a brave call to the barricades of Truth, and added that normally the CPJ focuses on threats to journalists in repressive regimes. But "this year the threats to press freedom are quite close to home. It's right here," New Yorker editor David Remnick said at the beginning of the evening. David Remnick -- that's another journalist who worships Obama and his presidency, and loathes Trump.

The media elite simply cannot see that many Americans see all these dour lectures and dismiss it as just a gaggle of angry Democrats who pose as reporters on TV.