Rachel Maddow: If Trump Wins, 'I Don't Know If Any Of Our Jobs Will Exist'

In a chummy interview with Entertainment Weekly, MSNBC host Rachel Maddow insisted she wouldn't move to Canada if Donald Trump wins. "Canadian connections aside, Maddow says she’s definitely staying, even if a Trump presidency could have radical effects on her chosen profession." Maddow imagined Trump could somehow ban MSNBC from the airwaves: 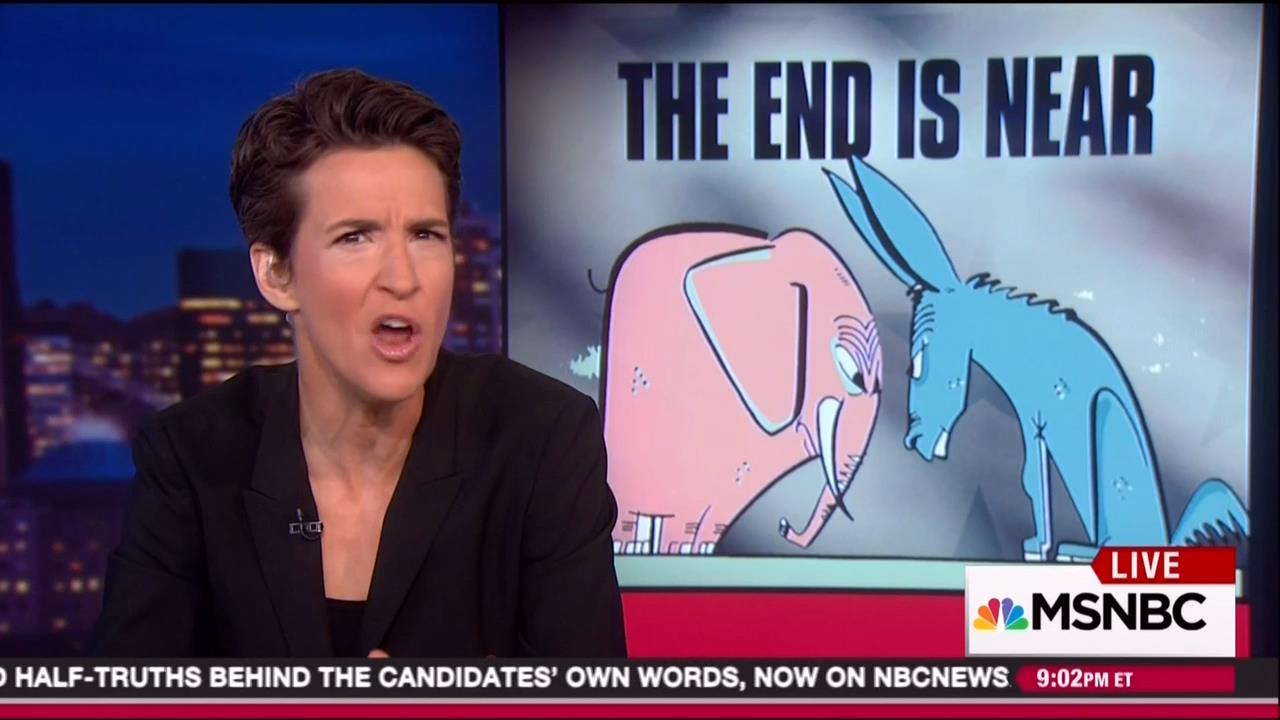 “Trump says that once he’s president, ‘Media’s not going to get away with the stuff they get away with now. We’re going to change those libel laws!’” Maddow says. “He blacklisted the freaking Washington Post from covering him. So who knows what it’s going to be like with Trump as president? Who knows how he’ll use his power to try and destroy the press?”

“If he does what he’s promising to do, I don’t know if any of our jobs will exist any more,” Maddow says. “But as long as someone will have me, I’ll do this job.”

In the video that comes with the article, she compares Trump to "a snake in the cold," and asked which musical instrument would describe Hillary Clinton, she picked the oboe.

When asked "What’s the best thing about America?" she turned to the Muslims:

The idea of America is still the best thing about America. Just take religious freedom alone. You know? Like, no, we’re not going to ban people from this country on the basis of their religion. That would make us not who we are as a country, and the fact that we have religious freedom as a foundational point of who we are is part of why the rest of the world looks up to us.

Maddow didn't have the same "foundational" view about religious freedom when it comes to forcing abortion and contraception on Catholic hospitals and employers, even convents full of nuns.

PHILIP GALANES, NEW YORK TIMES: How do you feel about Hillary’s guarded temperament?

RACHEL MADDOW: I think it’s a form of emotional maturity. It takes intellectual stamina to stay open, as a leader and a mind, to absorb information and adversity.

MADDOW: That’s a form of strength.

So take the private-server email scandal and chalk it all up to "emotional maturity" and "intellectual stamina." Maddow was also impressed that Hillary would campaign with Maddow's staff, as if they aren't the Democratic base:

GALANES: Have you met the candidates?

MADDOW: I met Hillary in a professional capacity. I interviewed her. But what happened off-camera was almost more interesting. I don’t think of her as an extrovert, but when we were done, she met every single person on set, my entire staff, the whole floor, including the cleaning crew. Shook hands, took pictures. She was being kind to people who had an interest in her. But to see her do that, willingly, at the end of her 11th event of the day, that surprised me.