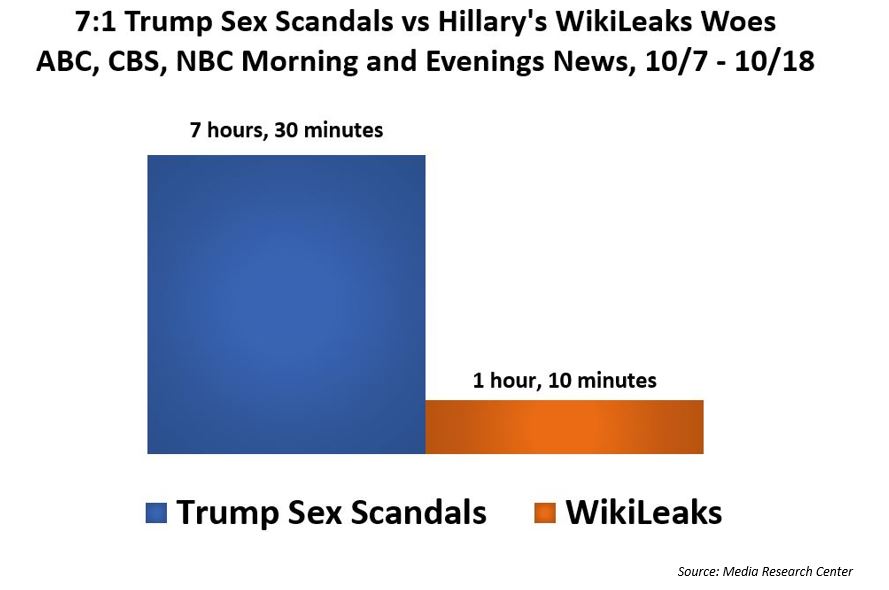 The imbalance between Trump's sex scandals and Hillary Wikileaks woes continues. The latest count by MRC analysts finds there's now been 7 hours and 30 minutes of network coverage on the theme believed to be most damaging to Trump's campaign, and only 1 hour and 10 minutes on the theme that could be most damaging for Hillary Clinton (and the media's "objective" image).

To keep track of all the collusion being exposed in the Wikileaks emails, we've made a list of some outstanding examples:

– The Daily Caller found Chuck Todd and his wife, Democratic direct-mail strategist Kristian Denny, sent out invitations for a September 2015 party at their house honoring Clinton communications aide Jennifer Palmieri and her husband, Jim Lyons. At the time, Denny was an aide on the presidential candidate of former Democrat Sen. Jim Webb of Virginia.

-- In an April 30, 2015 email, Politico’s chief political correspondent Glenn Thrush asked John Podesta to clear  his article on Hillary's campaign finances before publication:  “Because I have become a hack I will send u the whole section that pertains to u...Please don’t share or tell anyone I did this Tell me if I f--ked up anything.” Podesta replied that, off-the-record, there were “no problems.”

– Earlier in 2015, the same Jen Palmieri lamented an "outrageous" interview that NBC's Cynthia McFadden conducted with Bill Clinton about his foundation work in Africa. Palmieri sent an e-mail to her associates underlining that she had "called Chuck Todd to let him know how outrageous and ludicrous this was and that our side of the house is watching to see how NBC handles this." NBC gave Clinton the typical McFadden puff piece.

– ABC’s George Stephanopoulos harshly interviewed author Clinton Cash author Peter Schweizer on his Sunday show on April 26, 2015. In an e-mail, Clinton campaign staffer Jesse Ferguson boasted Stephanopoulos “refuted” Schweizer.  “Great work everyone. This interview is perfect. He lands nothing and everything is refuted (mostly based on our work).” Stephanopoulos was later pounded for failing to disclose his $75,000 in contributions to the Clinton Foundation (he was a provider of Clinton cash). 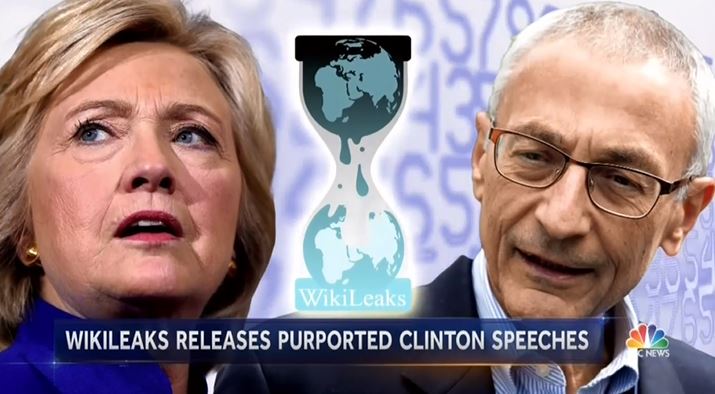 – CNBC’s Becky Quick – who co-moderated a very tilted CNBC Republican debate – promised John Podesta after Sylvia Mathews Burwell as nominated as Secretary of Health and Human Services: “Thanks so much for the note -- anyone with your recommendation is good by me....I will make sure to defend her when things get further along in the nomination process.”

– CNBC’s John Harwood – who also moderated the CNBC debate – oozed to John Podesta how great Hillary looked: “She looked so much more comfortable talking to Andrea today than to Brianna a few weeks ago.” He sent the Clinton aide a tweet he posted defending Hillary’s ethics: “if there’s any specific/plausible suggestion of nefarious email @HillaryClinton was trying to hide, I haven’t heard it.”

– Mark Leibovich of the New York Times gave Hillary’s communications director Jen Palmieri veto power over  quotes to be included in a Hillary profile in July. At the end of an email, Palmieri listed her vetoes, then shot back like a boss: “Let me know if that is not clear. Working from an iPhone on the plane so am not able to access the transcript to cut and paste.”

– Maggie Haberman (now of the New York Times) was singled out as a pliant recycler of their narratives: “We have has [sic] a very good relationship with Maggie Haberman of Politico over the last year. We have had her tee up stories for us before and have never been disappointed.”

– Univision owner Haim Saban, a Clinton donor, is also advising on strategy. John Podesta emailed that “Haim thinks we are under reacting to Trump/Hispanics. Thinks we can get something by standing up for Latinos or attacking R's for not condemning....Haim is right - we should be jamming this all the time.”

-- 38 national journalists RSVP's "Yes" to the Clinton campaign for a private, “off-the-record” dinner with “influential reporters, anchors and editors” on April 10, 2015, just two days before Clinton officially announced her presidential bid. The cocktail party took place at Clinton’s chief strategist Joel Benenson’s home. The goals of the dinner included giving “reporters their first thoughts from team HRC in advance of the announcement” and “framing the HRC message and framing the race.”

It's a bad joke that NBC veterans like Chuck Todd insist that Wikileaks would be a much bigger story, except Donald Trump is such a horrible candidate:

LAUER: So the question – so obviously if you say it would have been that damaging in the primary, the question then is, how damaging, if at all is it now with three weeks to go until the general election?