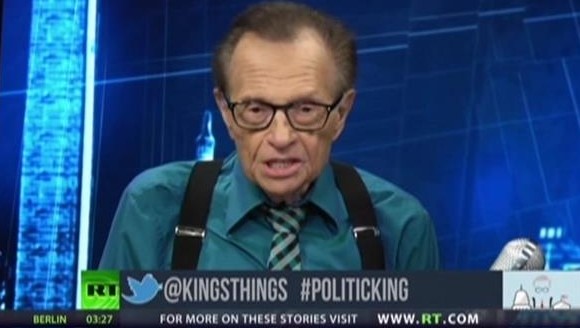 In all, people the Center identified in federal campaign finance reports "as journalists, reporters, news editors or television news anchors — as well as other donors known to be working in journalism" combined to give more than $396,000 to the presidential campaigns of Clinton and Trump.

Nearly all of that money — more than 96 percent — has benefited Clinton: About 430 people who work in journalism have, through August, combined to give about $382,000 to the Democratic nominee, the Center for Public Integrity’s analysis indicates.

About 50 identifiable journalists have combined to give about $14,000 to Trump.

CPI's Dave Levinthal and Michael Beckel found former CNN star Larry King has donated to Hillary -- even as Clintonistas have mocked King as having Russia TV backers who favor Trump:

Longtime television host Larry King, who now hosts a program on Russian-owned TV network RT and has called Trump “a great friend,” is also a Clinton donor, having given her campaign $2,700 in May. In June, King said he intends vote for Clinton because he disagrees with Trump’s stances on such issues as immigration and abortion.

Another Hillary donor is a retired ABC News star who's putting her money where her heart has long been:

Carole Simpson, a former ABC World News Tonight anchor who in 1992 became the first African-American woman to moderate a presidential debate, is not moderate about her personal politics: the current Emerson College distinguished journalist-in-residence and regular TV news guest has given Clinton $2,800....

Simpson today describes herself as an “academic” and “former journalist.” Therefore, she says she’s “free to do many things I was prohibited from doing as a working journalist,” including giving money to Clinton.

“I have been waiting for the day our country would have a woman president,” Simpson said. “When Hillary decided to run, I was delighted because I couldn’t think of a more qualified woman to seek the high office.” 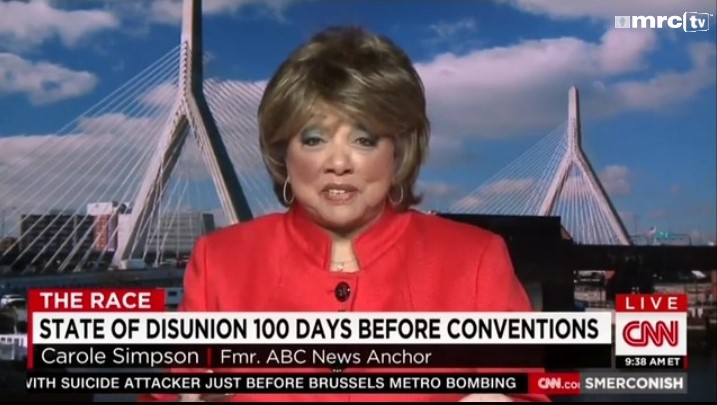 Simpson's been donating her support on TV as well. In an April interview on CNN, she declared “People my age, contemporaries of Hillary Clinton, want her to be President and are going to vote for her. The young women I teach at college — and I’m teaching the primary season this semester and we’ve been studying this — my young 20-year-olds don’t understand why they should vote for Hillary Clinton....So I don’t know what’s happening, and I don’t know why women don’t think Hillary Clinton ought to be the first female President.”

In a September interview on CNN, Simpson insisted no one cared about Hillary's emails any more, but Trump's tax returns were hot fodder. She worried out loud that Lester Holt would be too wimpy with Trump:

I wish I could have told Frank Fahrenkopf -- who helped select me to be the moderator in '92 -- I wanted to tell him that I would give anything if I had the chance to do that debate on Monday night. I'm concerned that Donald Trump is going to try to deflect and he's not -- Lester won't be able to pin him down, and he's such a gentleman, he wouldn't be disrespectful. But if I were there, I wouldn't let him go. I would ask the same question again and again and again until he said something that might make some sense.

Simpson also publicly endorsed Mrs. Clinton for president in 2008, and Brent Baker reported she even hosted a paid "national town hall" program for the Clinton campaign on the Hallmark Channel.