On the front page of Thursday’s newspaper is a  story headlined “Two Women Say Trump Made Unwanted Advances Long Ago.” The sexual-harassment accusers were Jessica Leeds, 74, and Rachel Crooks, 33, who both said they were outraged when Trump denied any groping to Anderson Cooper in the second presidential debate. In August, the Times published an essay on the front page saying Trump was too dangerous to try fairness and balance. Reporters had to be "oppositional." Reporters Megan Twohey and Michael Barbaro were explicit about how this story could wreck Trump’s candidacy – which we know the Times desperately desires.

In the days since Mr. Trump’s campaign was jolted by a 2005 recording that caught him bragging about pushing himself on women, he has insisted, as have his aides, that it was simply macho bluster. “It’s just words,” he has said repeatedly.

And his hope for salvaging his candidacy rests heavily on whether voters believe that claim.

They should not, say Ms. Leeds and Ms. Crooks, whose stories have never been made public before. And their accounts echo those of other women who have previously come forward, like Temple Taggart, a former Miss Utah, who said that Mr. Trump kissed her on the mouth more than once when she was a 21-year-old pageant contestant.

Leeds says Trump lifted up the arm rest and groped her on an airplane flight in “the early 1980s.” (We can’t get a year?) Crooks says Trump started kissing her on the cheeks and then the mouth immediately after she introduced herself outside an elevator in 2005, when she was 22. 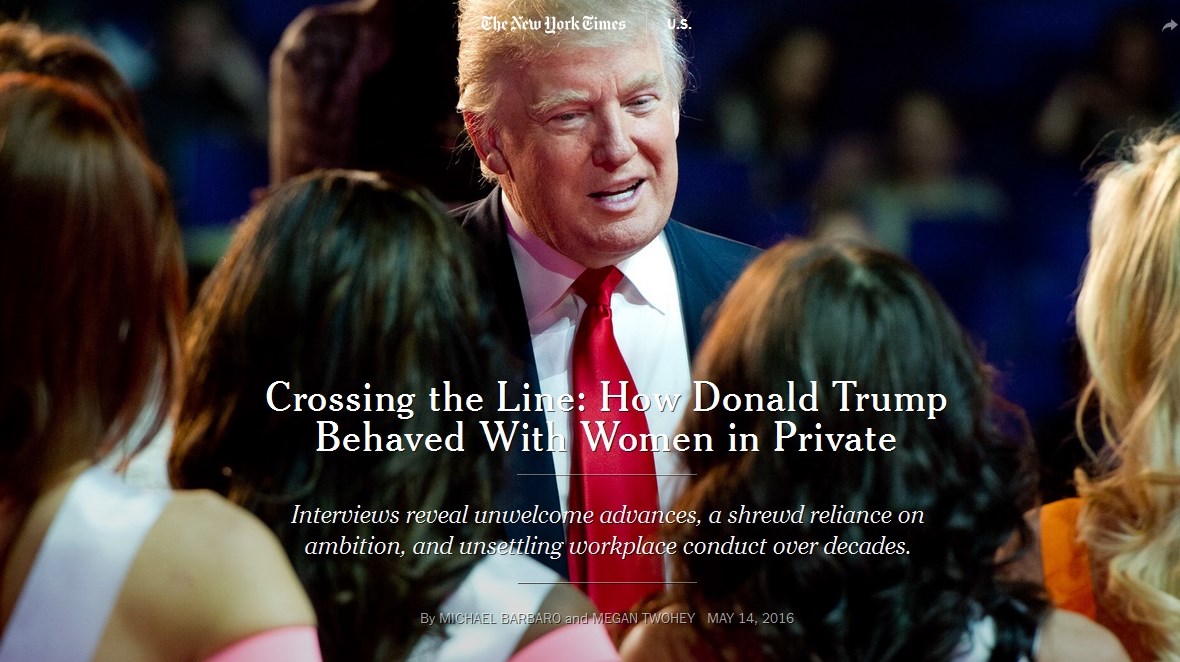 This is at least a more serious account of harassment than the Trump-paraded-a-woman-around-in-a-bikini story in May. Back then, Brent Bozell and I quickly reviewed the paper's partisan hypocrisy:

When Juanita Broaddrick accused Clinton of sexual assault in February 1999, the Times was not impressed. They never found her story worth publicizing, since they were first told about it near the end of the 1992 campaign. They described it as partisan “toxic waste.”

When Kathleen Willey accused Clinton of sexual harassment in the Oval Office, they smeared her in a Frank Rich column headlined “The Liars Club.”

This is the paper where feminist columnist Anna Quindlen dismissed Paula Jones as no sexual harassment icon like Anita Hill. She said there was “no reason to let right-wing activists, no friends to either the President, women, or the issue of sexual harassment, shame us into foolish lockstep.”

This is the paper that published columns by both Hill and Gloria Steinem shredding feminism in defense of President Clinton’s intern antics during the Lewinsky scandal.

As for toxic waste, this is the paper which proudly published Maureen Dowd on the front page on April 7, 1991 as she slimed Ronald and Nancy Reagan with Kitty Kelley’s uber-sleazy and uber-unsubstantiated tabloid tales. “The new biography also offers sensational claims that the Reagans practiced a morality very different from what they preached....that both the Reagans had extramarital affairs, and that Mrs. Reagan had a long-term affair with Frank Sinatra.”

The Times pooh-poohing of the Paula Jones lawsuit, which was not only settled for $850,000 but led to President Clinton's impeachment, is memorable.

On May 8, 1994, Times columnist Frank Rich suggested the Jones sexual-harassment claims were manufactured as a right-wing plot:  “Is it possible that the Clinton bashers, belatedly realizing that Americans are sick of bimbo stories, decided to repackage one of those stories as a sexual-harassment case with the hope that a new angle would be more damaging to the President with both the public and the mainstream media? Somewhere in this sleazy case, no doubt, there's a smoking gun. Don't be surprised if it shoots the Clinton haters right in the foot.”

In a “Washington Memo” analysis that same day, correspondent (not quite yet columnist) Maureen Dowd pronounced “Maybe this period is a seamy aberration in American politics, one of those strange times in which life outpaces satire. Or maybe it is inevitable in a society with the attention span of a click and a yawning appetite for confessional talk shows, tabloid television and personality magazines that A Current Affair and the Oval Office would eventually converge with a sickening thud.”

This, from the woman who pushed Kitty Kelley's unsupported gossip about Nancy Reagan and Frank Sinatra!