The website Politifact Bias underlined how slippery the “fact checkers” get when they’re screening speeches by the Democrats – as they actually admit they’re following Clinton campaign tipsters. PolitiFact's Sean Gorman admitted "Sarah Peck, the Virginia communications director for Democratic presidential nominee Hillary Clinton’s campaign, pointed us to a June 7 article in BuzzFeed News about the tent episode." They rated this speech nugget from Tim Kaine “True”:

"When Moammar Gadhafi was set to visit the United Nations, and no one would let him stay in New York, Trump allowed Gadhafi to set up an elaborate tent at his Westchester County (New York) estate."

Kaine’s next sentence: “That’s right, when Gadhafi was looking for a place to stay in America, and because of his human rights track record, and the pan am bombing, others were turning him away, he found one guy – one guy – who was willing to host him.” 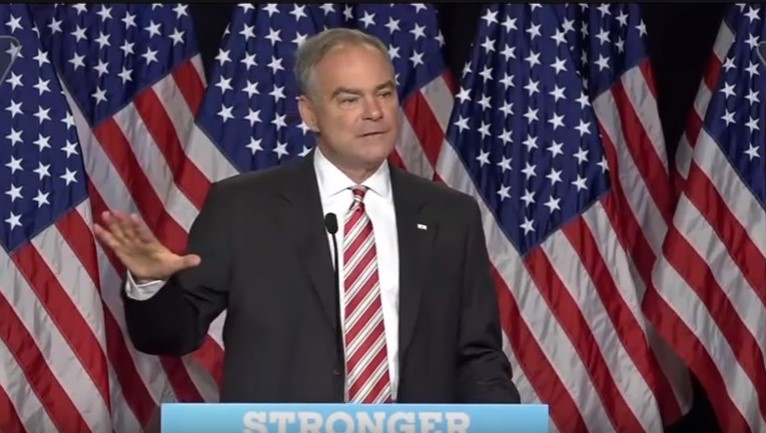 Kaine said nobody would let Gadhafi stay in New York, then said Trump let Gadhafi set up a tent on his estate. So was Kaine saying Gadhafi stayed at the estate in an elaborate tent?

PolitiFact apparently thinks so, otherwise the caption under the "Truth-O-Meter" serves no useful purpose: "Gadhafi a no-show." Isn't it significant that Gadhafi did not end up staying at the estate despite the appearance that's what Kaine implied?

Shouldn’t that at least modify Kaine’s claim to “Mostly True” or “Half True”? But PolitiFact doesn’t need anyone to actually read through the articles. Just read their tweets.

But Gorman's article brought actual facts to the table that never registered on the so-called “Truth-O-Meter.” 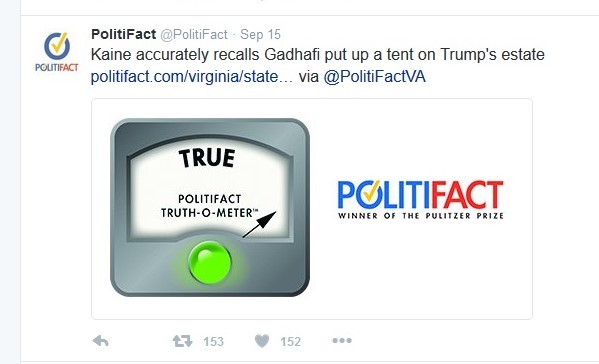 Amid the controversy, the news media descended on the upscale neighborhood surrounding Trump’s estate to chronicle the tent flap.

Bedford officials ordered the tent taken down, saying it violated zoning laws. Trump, through a spokeswoman, said in a statement that he had asked the Libyans to take down the tent.

The Libyans complied but only for a while. They put it back up amid reports Gadhafi was planning to visit the estate.

Town officials, under police escort, went onto the property and ordered the tent struck yet again. The tent was taken down again and hauled away the next day.

Joel Sachs, Bedford’s town attorney, told us there’s no indication Gadhafi ever made it to the property. Local news reports said the Libyan leader never got to see the estate. Sachs told The Journal News in 2009 that officials at the estate said one of Gadhafi’s sons did venture to Seven Springs.

But wait – what about other things that Kaine said in that speech, things the Clinton campaign didn’t send over? Take for example the NBCNews.com report on Kaine’s speech:

Kaine quoted a recent story in Foreign Affairs by saying, "groups like ISIS are actually kind of rooting for Trump." The story, he noted, included interviews with a "number of jihadists, and many of them are hoping for Trump to succeed in the campaign. They've even put out recruitment videos featuring him since Donald Trump's talk of this un-American banning of all Muslims plays right into their hands for propaganda purposes."

Kaine said: “A sad fact is groups like ISIS are actually kind of rooting for Trump. A recent article in Foreign Affairs actually interviewed a number of jihadists and many of them are hoping for Trump to succeed in the campaign. They've even put out recruitment videos featuring him, since Donald Trump's talk of this un-American banning of all Muslims plays right into their hand for propaganda purposes.”

“I found it even surprising how clear and compelling the case was where he quoted ISIS spokespeople rooting for Donald Trump’s victory because Trump has made Islam and Muslims a part of his campaign and basically, Matt Olson argues, the jihadists see this as a great gift," Clinton told Channel 2.

"They are saying, 'Oh, please, Allah, make Trump president of America,'" she continued.

Mediaite cried foul, but where was PolitiFact? In July, PolitiFact found cyberspace for "Donald Trump wrongly blames Hillary Clinton for creation of ISIS" ("False") and "Donald Trump says before Hillary Clinton was Secretary of State 'ISIS was not even on the map" (“Mostly False”). But there's nothing on the Democrats saying ISIS is "rooting for Trump" under PolitiFact's recent judgments on terrorism claims.

This would imply that PolitFact is either (A) convinced Clinton-Kaine are accurate; (B) lazy; and/or (C) Only follow tips the Clinton campaign hands them. But at least The Washington Post "Fact Checker" investigated that? Well, no.  They were obsessing over “The zombie claim that Hillary Clinton was fired during the Watergate inquiry.”