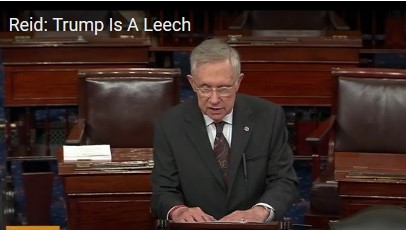 Here’s another proof that The Washington Post is a Democratic rag. On July 22, the editorial board announced with the highest dudgeon that Donald Trump was “uniquely unqualified" – even a “peril” to democracy -- because he was “mounting a campaign of snarl and sneer, not substance....Mr. Trump’s politics of denigration and division could strain the bonds that have held a diverse nation together.”

On September 15, Ben Terris of the Post hopped in a car with snarling, sneering Senate Majority Leader Harry Reid for a Style section profile exploring his “sentimental journey” on his way to retirement. Terris left out Reid’s latest video describing Trump as a “spoiled brat” and a “human leech who will bleed the country.”

Reid is not unqualified for office for his temperament. He’s a “shrewd tactician.”

Reid is known as a shrewd tactician, a killer who speaks softly but carries a sharp knife. Ask him about regrets or mistakes and he will often say he doesn’t like to look back. He’s the kind of a guy who hangs up without saying goodbye, who called George W. Bush a “loser” and told him to his face that “your dog is fat.” But as he prepares to leave the Senate, with high hopes for his successors, even Reid can’t avoid displaying something resembling human emotion.

Born without a filter, he’ll also go down in history for audacious — sometimes dubious — broadsides against opponents (his claim that Mitt Romney “didn’t pay taxes for 10 years”), and the propensity to offend with an offhand remark (President Obama, he once declared, spoke with “no Negro dialect, unless he wanted to have one”).

At the end of the piece, Terris underlined Reid’s shamelessness:

Not that he’s the type to let the facts get in the way of a good attack anyway: Despite getting pilloried from all sides for claiming without evidence that Romney got away without paying taxes, Reid has no regrets.

“It’s one of the best things I’ve ever done,” he said.

Is there a line he wouldn’t cross when it comes to political warfare?

“I don’t know what that line would be,” he said.

Reid was not “pilloried from all sides.” Some people thought it was quite effective. Take ABC’s Good Morning America on August 4, 2012. David Kerley reported “Democrats love this: Mitt Romney talking about his taxes instead of talking more about the jobs report and the economy.” Anchor Bianna Golodryga summed up: “Harry Reid, always one to speak his mind.”

Speaking of playing hardball, the Post never did that to Harry Reid on his stories about how he was blinded by his own exercise equipment. Reid's penchant for making stuff up never entered their mind. Terris repeated:

He walked to the SUV gingerly, donning sunglasses and leaning on a silver-tipped cane, his new necessities of the past several months. Early last year, the senator had been exercising in his suburban Las Vegas home when the elastic band he was using snapped in half, whacked him in the face and sent him crashing backward into a set of cabinets. He broke multiple bones in his face and remains blind in his right eye. For three months, he had to sleep sitting up in a chair.

“I was hurt, okay?” he said. “Worse than most people know.” Being laid up gave him time to think. He felt lucky to have been so physically able his whole life, and grateful that he and his wife had their health. Though the Senate was his great love, he decided he didn’t have it in him for another run.

"Worse than most people know" means "I relied on the press to avoid any difficult questions after it happened." But the Post is easy pickings. Because they're a Democratic rag. The Post barely touched on the injury in the newspaper in early 2015 and never questioned Reid's story. These are the same people now demanding Trump's medical records.