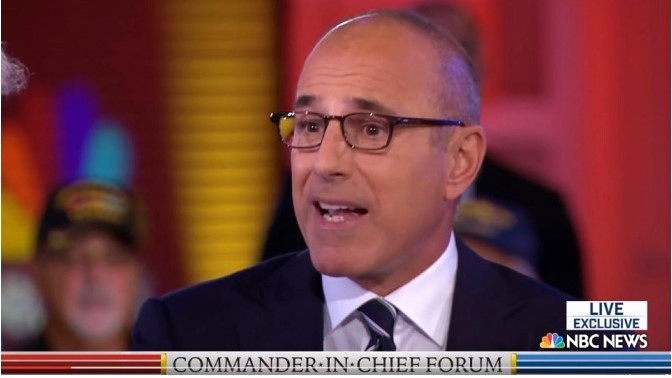 Republican candidates have been able to run against – even fundraise against – the fundamentally partisan opposition in the media. But you know it’s pretty desperate when the Democrats begin running against Matt Lauer – even fundraising against him, like he’s a Fox News regular.

An appeal to Hillary supporters from Christina Reynolds, the Clinton campaign’s deputy communications director, relied on an outraged Washington Post editorial to make its complaint:

This morning, the Washington Post editorial board took a moment to examine how Matt Lauer treated the two candidates at the forum on Wednesday night -- where a third of Hillary's time was spent answering questions on emails and Trump got asked softball questions he could answer with lies.

After acknowledging that fact, the Post asked their readers to consider the following: “Imagine how history would judge today’s Americans if, looking back at this election, the record showed that voters empowered a dangerous man because of ... a minor email scandal. There is no equivalence between Ms. Clinton’s wrongs and Mr. Trump’s manifest unfitness for office.”

The editorial page writers at The Washington Post may die happy now, since they’ve now doubled as advertising copywriters for Hillary’s campaign. The partisans at the Post say this is a “minor email scandal” – the people who in the last presidential election made a “major scandal” out of Mitt Romney’s alleged teenaged haircut pranks and Rick Perry have a rock with an N-word on it that he painted over – but if you look reeeeal close, Perry might still be racist.

This email appeal carried a very muddled message: reporters are very objective....which is a terrible idea when the choice this year is between a fantastic public servant and  a mentally imbalanced authoritarian:

I work with reporters every day. I'll be the first to tell you how hard they work -- the extent to which they try to be objective, evenhanded, and fair.

But there's just one problem: They’ve never had to cover two candidates as vastly different as Hillary and Trump.

When cable news and major papers spend the same amount of time (or more!) covering Hillary's emails as they do covering Trump's ties to white supremacists, unapologetic admiration for Vladimir Putin, or blatant history of discrimination, voters begin to treat the two candidates as if they were equivalent.

And too many people come to see this election as a choice between “the lesser of two evils” instead of a stark decision between a gifted, dedicated public servant and a dangerous, divisive authoritarian.

So our biggest test as a team in the 60 days we have left is to try to accomplish what the media has so far failed to do, and make sure every voter understands how dangerous a Trump presidency would be. The world is counting on us.