For a Second Day, New York Times Pummels Matt Lauer As a 'Loser,' a 'Disaster'

The New York Times offered a second day of slamming Matt Lauer in the front section, both the top staff editorial headlined “A Debate Disaster Waiting to Happen” and a snide James Poniewozik review headlined “In Battle of Candidates, Lauer Is the Loser.”

It’s quite clear that if Hillary Clinton had actually won this side-by-side interview, the media elites would not be brutalizing Lauer. Their flood of commentary betrays the transparent belief that this election is far too important for the media to shrink from seeking to defeat and discredit Donald Trump in every interview and debate.

This was their approach in putting Jim Rutenberg’s media-must-defeat-Trump commentary on page one, and it’s apparent in everything the Times touches in this campaign. The Times editorial warned that moderators will do the country a “grave disservice” if they don’t expose Trump as a blithering inaccuracy generator. 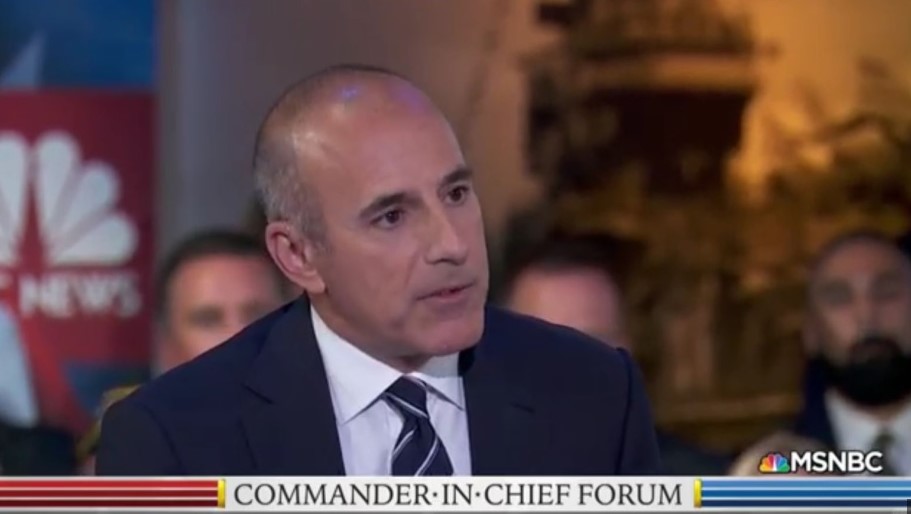 If the moderators of the coming debates do not figure out a better way to get the candidates to speak accurately about their records and policies — especially Mr. Trump, who seems to feel he can skate by unchallenged with his own version of reality while Mrs. Clinton is grilled and entangled in the fine points of domestic and foreign policy — then they will have done the country a grave disservice...

[Lauer] was harder on Mrs. Clinton than on Mr. Trump, reflecting a tendency among some journalists to let Mr. Trump’s deceptions go unchallenged....

Disputing outright lies may actually be one of the easier challenges for a moderator. The harder task is to pierce fantasies and gibberish. That requires preparation and persistence.

But what about Hillary’s outright lies and distortions? Take, for example, her statement that there will be no ground troops in Iraq. The Times editorial makes excuses for her right in this same editorial. She was merely demonstrating her “judicious” approach to military force, not making an embarrassing “what is Aleppo?” gaffe:

At one point, Mrs. Clinton, trying to assure the audience that she would use military force judiciously, said, “We are not putting ground troops into Iraq ever again, and we’re not putting ground troops into Syria.” This left unanswered the question of whether she had made a promise she can’t keep, particularly since there are some Special Operations forces in both battlefields now.

The Times ought to just explicitly say it expects the moderators to lay off Hillary and force Trump into a performance that will hurt him with voters, or else they’re doing a “grave disservice” to America.

In his "Critic's Notebook" jeremiad, Poniewozik explicitly trashed Lauer as a loser making a “humiliating retreat,” from the very beginning:

The NBC presidential forum on Wednesday night in Manhattan brought together the candidates Hillary Clinton and Donald J. Trump to try to determine who has the strength, preparation and presence of mind to lead during a time of crisis.

It sure wasn’t Matt Lauer.

In an event aboard the decommissioned aircraft carrier Intrepid, the “Today” host was lost at sea. Seemingly unprepared on military and foreign policy specifics, he performed like a soldier sent on a mission without ammunition, beginning with a disorganized offensive, ending in a humiliating retreat.

Now try and find a place where Poniewozik attacked Matt Lauer like this for his many interviews with Trump on Today over the last year. A Nexis search of “Poniewozik” and “Trump” and “Lauer” only brings up today’s exercise in teeth-gnashing. It was fine to be soft on Trump in primary season ....up until it threatened Hillary Clinton.

Like the rest of the liberal mob, Poniewozik thinks Trump had a much easier time than Hillary:

That interview was the apotheosis of this presidential campaign’s forced marriage of entertainment and news. The host of NBC’s morning show interviewed the former star of its reality show The Apprentice, and the whole thing played out as farce.

Let's not even approach how nice Lauer was to Trump when they were NBC colleagues. This interview was far tougher than that. Notice Poniewozik doesn’t run the actual Lauer questions to Trump, such as:

-- “Let me ask you about some of the things you’ve said about Vladimir Putin. You said, I will tell you, in terms of leadership, 'he’s getting an A, our president is not doing so well.' And when referring to a comment that Putin made about you, I think he called you a brilliant leader, you said it’s always a great honor to be so nicely complimented by a man so highly respected within his country and beyond....He’s also a guy who annexed Crimea, invaded Ukraine, supports Assad in Syria, supports Iran, is trying to undermine our influence in key regions of the world, and according to our intelligence community, probably is the main suspect for the hacking of the DNC computers…But do you want to be complimented by that former KGB officer?”

And the sexual-assault hardball:

-- In 2013, on this subject, you tweeted this, quote, '26,000 unreported sexual assaults in the military, only 238 convictions. What did these geniuses expect when they put men and women together?'...So this should have been expected? And does that mean the only way to fix it is to take women out of the military?

Despite this, Poniewozik acts like he didn't reread the transcript so he can pretend that this was a whiffle-ball session:

In general, though, Mr. Lauer’s questioning of Mr. Trump was like watching one student quiz another to prep for a test neither had done the reading for. The host asked soft open-ended questions that invited the candidate to answer with word clouds.

Poniewozik huffily concluded that Chris Wallace is already demonstrating we can’t trust the moderators to be just like Candy Crowley and aid the Democrat:

But Fox News’s Chris Wallace is, and he recently said that he did not consider it his job to truth-squad candidates as a moderator. Let’s not mistake who this helps most: the fact-checking website PolitiFact has found far more false statements from Mr. Trump than from Mrs. Clinton. [Liberals never acknowledge PolitiFact has had to be dragged into declaring anything Hillary as a "Pants on Fire" lie.]

Why would a journalist be allergic to verifying the truth? On an MSNBC panel, Chris Matthews guessed that Mr. Lauer didn’t correct Mr. Trump on Iraq because of perceptions.

“You have to call the guy a liar when you do that,” he said. “That’s the difficult thing for a Matt Lauer to do, because it sounds like an opinion.”

But it’s not. When a candidate says he didn’t say something that he did, that’s a matter of fact. Here’s what an opinion looks like: It’s a travesty to be steamrollered by a candidate because you’re worried that doing your job will look bad.

To put it in military terms, weakness is an invitation to attack. Going into the debates, what we saw at NBC’s forum should make you very, very worried about our first line of defense.

What on Earth does this mean, the media are “our first line of defense”? Is the enemy here ISIS or the Russians? Or is Trump the enemy?