Back in 2012, People magazine supinely let its pages be used as an early campaign brochure for Anthony Weiner as he began to plan a comeback from his first "lewd text and photo scandal," as his wife Huma Abedin tragi-comically proclaimed, "It took a lot of work to get to where are are today, but I want people to know we're a normal family." 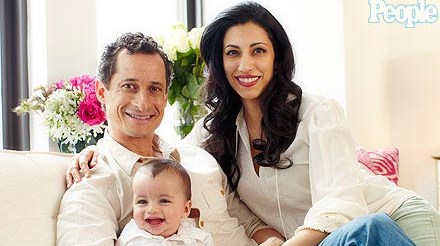 She entered "intensive" joint therapy with Weiner last fall that continues today. "They really became a unit and she feels much closer to Anthony now," a family member says.

And thanks to the therapist's advice to "live your life, don't be paralyzed by your past," Abedin encouraged Anthony to get back into the political game by chasing his lifelong dream of being New York City mayor.

"He's out there every day with people telling him how great he is," explains a close friend of Abedin's, "getting it more than he did sitting on their couch for two years."

And then there was this:

Raised in an observant Muslim family where divorce is unheard of, Abedin was determined to give her son an intact home and to not keep Weiner, whom she has frequently said is a great father, from seeing his son. “Anthony’s very attentive to Huma. He’s bright and funny,” explained a friend of the couple.

Now that Abedin's Islam has taken a back seat and she's dumped the husband, People again carried Huma's water in the last magazine, a little hidden on page 62. They reported she began referring to Weiner as “Jordan’s dad” rather than “Anthony,” and she has stopped wearing her wedding and engagement rings.

Why did she stay as long as she did? “Huma has a very strong moral character,” her longtime friend Rory Tahari told People in 2013. “She never wanted Jordan to say to her, ‘Why didn’t you do everything you could to help Dad?’”

Online, the People gang generated more quotes about her "uncommon grace and dignity" from Hillary backers:

Just hours before news broke that husband Anthony Weiner was caught in his third sexting scandal in five years, top Hillary Clinton aide Huma Abedin was attending a big-dollar fundraiser with her boss at the Hamptons home of Barbaralee Diamonstein-Spielvogel.

Diamonstein-Spielvogel, the chairwoman of the New York State Council on the Arts, tells PEOPLE that Abedin has "been through enough" and "she deserves our respect and privacy in this really difficult time in her life."

Soon after the New York Post published this latest scandal, Abedin announced she is separating from Weiner.

Abedin will "put her life together in a meaningful way" because "she does have uncommon grace and intelligence for a very young woman," Diamonstein-Spielvogel tells PEOPLE.

"She's never maintained herself with anything but dignity," she continues. "There are very few people one can say that about at any age."

At least that article let in a couple of critics: Donald Trump and actor James Woods, who hashtagged her "#JudgmentLoseroftheDecade."