A Washington Post headline on Wednesday raised eyebrows and led to some TV reporting. The headline was “A record number of Americans now dislike Hillary Clinton.” It wasn’t in Wednesday morning’s paper, so expect it on Thursday, right? Wrong. The Post front page had a story on fossils in Greenland, but no story for the fossils who love the print edition on Mrs. Clinton's unpopularity. 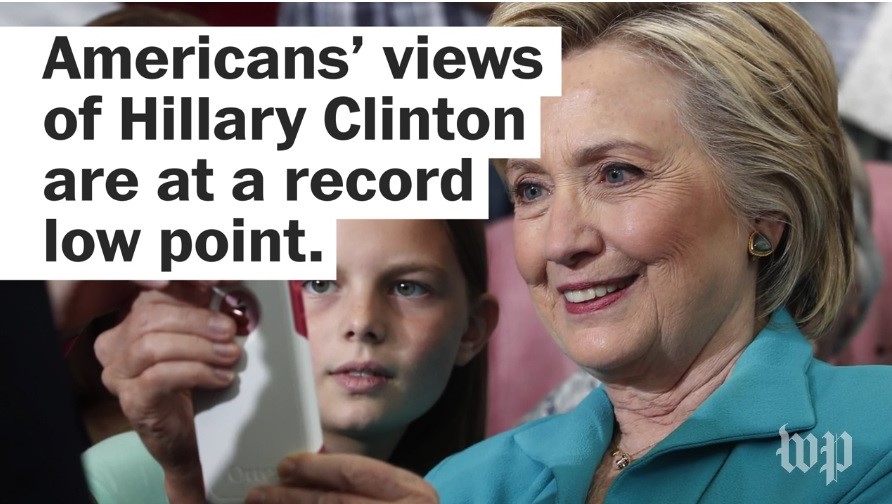 Hillary Clinton hit her stride after the Democratic National Convention, riding to a double-digit lead over Donald Trump in some national and swing-state polls — her highest of the year.

As of today, though, Americans' views of her just hit a record low.

A new Washington Post-ABC News poll shows 41 percent of Americans have a favorable impression of Clinton, while 56 percent have an unfavorable one.

That's the worst image Clinton has had in her quarter-century in national public life. Her previous low favorable rating this year was in July, when it was 42 percent, lower than any mark in historical Post-ABC polls except a few points in the 1990s when a large share of the public had no opinion of her. Her previous high for unfavorable views was in June, when 55 percent disliked Clinton.

Trump, of course, has long been the more unpopular of the two presidential nominees, and he remains so; 35 percent of Americans have a favorable impression of him, compared to 63 percent unfavorable.

But if you look just at registered voters, the new poll actually shows Clinton's image is about as bad as Trump's, with 38 percent having a favorable impression and 59 percent unfavorable, compared to a 37/60 split for Trump.

Clinton's numbers serve as a reminder that Trump's unpopularity isn't prohibitive, largely because Americans -- and specifically registered voters -- don't much like Clinton either. If it weren't for Trump, in fact, Clinton would be the most unpopular major-party presidential nominee in modern American history.

So here's how a lame self-defense would emerge from the Posties. We didn't omit the poll result, we just buried it!

The Thursday edition of the Post carried an article from reporter Anne Gearan on Hillary’s Trump-bashing speech to the American Legion, on page A-3. In the 17th and final paragraph, Gearan briefly and dutifully concluded with just one stolid sentence: “A new Washington Post-ABC News poll shows 41 percent of Americans have a favorable impression of Clinton, while 56 percent have an unfavorable one.”

ABC did the poll with the Post, and on World News Tonight, reporter Cecilia Vega briefly transitioned from Trump in Mexico to noting “In recent days, Clinton has instead been in the posh Hamptons, where she raised more than $12 million with A-list celebrities like Bon Jovi and Paul McCartney. But with just 69 days to go, there is trouble on the horizon. A new ABC poll shows Clinton more unpopular than ever. 59 percent of voters now have an unfavorable view of her, which puts her on par with Donald Trump.”

On NBC Nightly News, Andrea Mitchell tossed in a sentence: “Her pitch to veterans coming as Clinton's favorability is dropping. A new poll showing more Americans view her unfavorably than ever before. Among women, favorability down nine points.”

On CBS Evening News, Nancy Cordes threw in a Trump soundbite – “It's impossible to tell where the Clinton Foundation ends and the State Department begins” – before concluding “One result is that Clinton's favorability ratings have dropped by nine point among women and 16 points among Hispanics, just since the start of the month, though she is still leading Trump, Norah, in virtually every national poll.”