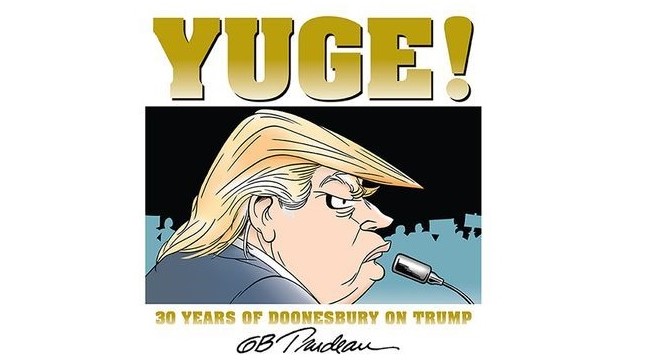 Michael Cavna of The Washington Post interviewed Doonesbury creator Garry Trudeau for Tuesday's Style section and highlighted how he said "If Clinton wins, I’ll miss the daily [Trump] outrage. If Trump wins, I'll miss civilization as we know it."

But Trudeau's take on mocking Hillary Clinton offered a potential summary of the media's feeling about this campaign. When asked what he as a satirist found interesting and worth mocking, he said "Nothing. When you’re obsessed with Trump, which, let’s face it, all of us are, going after Hillary feels like homework." This is the context:

CAVNA: Hillary Clinton’s been on your radar for decades, too. What is most interesting to you about her now, for the professional perspective of an editorial archer?

TRUDEAU: Nothing. When you’re obsessed with Trump, which, let’s face it, all of us are, going after Hillary feels like homework. She’s a well-intentioned technocrat, flawed to be sure, and in the interest of fairness, most of the talking heads point out her weaknesses. But they always seize the first opportunity to pivot back to Trump. Except for sex and coffee, he’s all anyone’s thinking about.

Trudeau was promoting a new anthology of his Trump strips over the years. Cavna began by gushing "you’ve been mining his gray-golden fleece for several decades. Are you still finding new facets of him to skewer, or is it more like listening to the same solid-gold hits of a reunited classic-rock act? What’s your approach in 2016?"

TRUDEAU: No, no new facets. My 30-year survey of Trump in the field makes it pretty clear that nothing’s changed. Since Trump’s need for attention is insatiable, my “approach” has simply been to not miss a news cycle. What has deepened is my understanding of what’s going on. What I once regarded as harmless buffoonery is in fact dangerously symptomatic. Whatever else this election is about, it’s primarily a referendum on mental health.

So Trudeau is another amateur psychiatrist. It's an interesting take from him, considering his wife, former NBC anchor Jane Pauley, has actually been a public advocate about the toll of depression.

Cavna was apparently too enamored of his guest to ask harder questions, even harder questions from the left, such as: "If Trump is so uniquely dangerous, why are you still only doing comic strips on Sunday?" After all, Trudeau's rationale for dumping his daily workload -- making the Amazon TV series Alpha House -- is no longer viable since the show was canceled.