As we approach the 11th anniversary of Hurricane Katrina and the anti-Bush media feeding frenzy that followed, The Huffington Post is offering us "The Definitive History of 'George Bush Doesn't Care About Black People,'" the splenetic outburst during a live Katrina telethon on NBC by that most egocentric of rappers, Kanye West. (Perhaps the promise of West speaking at Sunday night's MTV Video Music Awards is the real "news hook.")

Maxwell Strachan is one of those cultural curators who wants everyone to remember there was more than one outburst worth celebrating. He notes several times that George W. Bush considered this Kanye West spiel the low point of his presidency, like that's a plus. It's not like a Hollywood-Left analogue to Glenn Beck saying Obama has a deep-seated hatred for white people. That's categorized as lunacy, whereas Kanye was sort of unloading a hip-hop Gettysburg Address.

Not only did Kanye rip into Bush, he suggested America in general encouraged shooting black people: 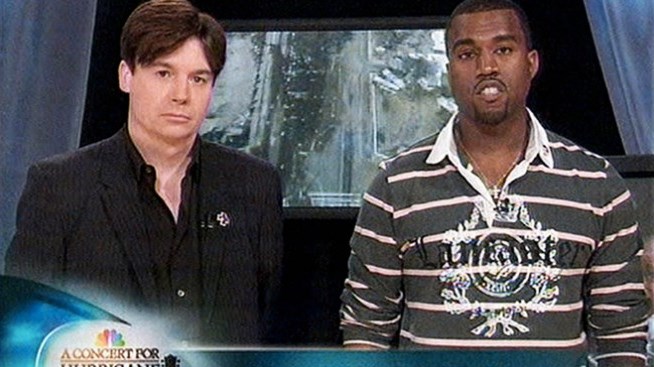 WEST: So anybody out there that wants to do anything that we can help with the set-up, the way America is set up to help the, the poor, the black people, the less well-off, as slow as possible. I mean, this is — Red Cross is doing everything they can. We already realize a lot of people that could help are at war right now, fighting another way — and they’ve given them permission to go down and shoot us.

At that moment, Radice noticed something odd. Until then, he had heard celebrities chattering in the background throughout the show. But now all the famous people had gone quiet. All eyes were fixed on West.

And then poor Michael Myers had to stand next to him on camera, panicking over how this would make him look. (The two of them would later make a Saturday Night Live parody of the scene.)

“He just seemed not appalled but almost flabbergasted,” Radice recalls of Myers. “I’ve always thought Mike might have felt that he got sandbagged,” Radice added.

“Myers looked like he had been shot in the head,” [executive producer Rick] Kaplan said.

Several members of the production team remember Myers turning to whoever would listen off-stage and shouting, “Well, that went well!” (Myers declined to comment for this story.)

The producers were trying to figure out what to think, too. “Everybody kind of went, ‘OK ...’ like somebody had just dropped a stinking turd on the stage, and we all kind of backed off and let it sit there for a while and moved on to other things and hoped that nobody really noticed,” Traub remembers now.

One producer, who requested anonymity, told HuffPost he had warned his colleagues before the telecast that West was known for “making everything about himself.”

Afterward, some producers worried West had done just that. “People were not happy,” Traub said. “We had worked our asses off on this,” said Frank Fernandez, an associate producer for the show. “We didn’t even talk about titles. In the credits, that’s when we found out what the titles were.”

For those who do not know who Rick Kaplan is, he's a powerful Friend of Bill Clinton who has produced biased liberal news at ABC and NBC. The story he tells the HuffPost is that several top musicians encouraged him to realize that Kanye West was right to say what he said and that eventually, it would be seen as correct:

Harry Connick Jr. went further. The singer and actor, a New Orleans native, had been instrumental in the show’s success, gathering musicians together to figure out last-minute arrangements. After West’s comments, Connick, along with country singers and couple Faith Hill and Tim McGraw, walked up to Kaplan and told him something the producer would never forget: that West’s comments wouldn’t ruin the show’s legacy but would ensure it had one — that West’s comments were important and correct.

“The three of them took me aside privately and said, ‘[We] know you’re probably upset by what Kanye said, but we’ve all been down there and we promise you that when the dust settles and what Kanye said is thought about and what people learn is learned about, [we] promise you’re going to be proud that Kanye ended up saying that on the show,’” Kaplan remembers. “They said, ‘We were down there, and [we’re] telling you it’s not good what the government’s doing there. They’re not being good. They’re not acting properly.’”

“It floored me,” he said. “In the end, Faith and Harry and Tim made my night.”

From there, Strachan moved on to a collection of leftists celebrating the West tirade as a glorious turning point for black activists:

In a recent essay for The Nation, writer Mychal Denzel Smith described West’s comments as the “first relatable expression of black rage on a national stage“ for a generation of black men and women.

“‘George Bush doesn’t care about black people’ was my first political memory,” Julia Craven, now a 22-year-old staff reporter for The Huffington Post, wrote in an email. “I didn’t really understand the nuances behind what Kanye meant by that, but I knew that historically white people didn’t care about black people (mostly because I’m from the south). So it made sense. It was funny more than anything else, though. It never crossed my mind that that was the beginning of Kanye’s politicizing or that we’d look back on Katrina and really understand how spot on that critique was. But I was 12.”