The Washington Times and the Jerusalem Post were very lonely in reporting that Muslim animosity toward Israel’s 47-member Olympic delegation has triggered a reprimand from the International Olympic Committee and protest from Jewish groups such as the Anti-Defamation League, which issued a statement this week decrying anti-Israel “hostility” in Rio de Janeiro.

None of the networks – especially NBC, the channel hosting the Olympics – seemed to notice at all on their newscasts. They can all champion the Muslim-American fencer, and then ignore the Muslim abuse of Israel. The Jerusalem Post reported the trouble began on the way to the opening ceremonies: 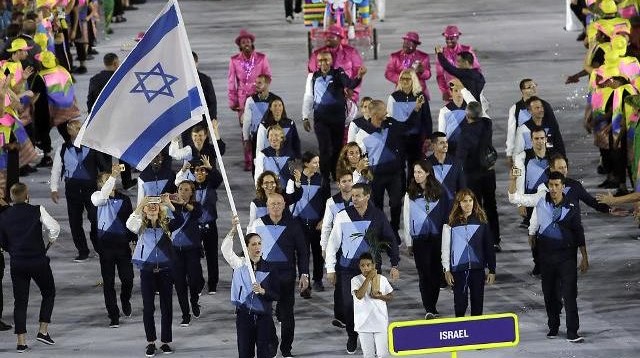 A separate source also said that Lebanese athletes are "committed to the national position in refusing to be in the same place as the Israelis." He added that Lebanon will remain part of the resistance against Israel.

Gal’s post set off an internet firestorm after he described the incident on his Facebook account on Friday. "2016 Olympics...shame on you," he wrote. "The Israeli delegation was preparing to board a bus to the opening ceremony, which was to be shared with the Lebanese delegation. The Lebanese, upon comprehending that they were to share a bus with the Israelis, addressed the driver in refusal and demanded that the door to the bus be shut. Event organizers then attempted to scatter us on different buses - something that is unacceptable for security and representative reasons."

"We insisted that we board the bus designated for us - and that the Lebanese should de-board if so they wish. So the bus driver opened the door. But this time, the head of the Lebanese delegation blocked the entrance to the bus with his own body. Event organizers - attempting to prevent a diplomatic incident - then organized a separate ride for us. But the diplomatic incident already occurred - shame!"

He added: "How can it be that something like this occurs on the eve of the Olympic opening ceremony? Does this not directly oppose what the Olympics represent and stand for...I cannot begin to express my feelings, I'm in shock from the incident."

Where is the diversity-and-inclusion crowd from NBC? If a country blocked a set of LGBT athletes from boarding a bus, they would have had a fit. But bullying Israel is apparently acceptable. The Times of Israel added that in judo, a Saudi competitor forfeited before having to face an Israeli.

A search for “Israel” in the last week of network transcripts showed ABC had an unrelated mention of an Israeli last Friday morning, and Democrat vice-presidential nominee Tim Kaine mentioned Israel on NBC’s Meet the Press on Sunday.

Israel mostly came up in a critique of Donald Trump. First on MSNBC, it came up on Tuesday night on Hardball, when liberal Connecticut Gov. Dannel Malloy insisted Trump was encouraging assassination like the shooting of Yitzhak Rabin.

On Wednesday night’s Hardball, host Chris Matthews picked up that line: “The New York Times lead editorial today called on Republicans to repudiate their nominee. The Washington Post editorial said Trump`s comments belongs on a list of "disqualifiers." That was their word. And New York Times columnist Thomas Friedman likened it to the right-wing rhetoric in Israel that led up to the assassination of Yitzhak Rabin.”

In the next hour, MSNBC All In host Chris Hayes repeated the smear: “In his column today, New York Times columnist Thomas Friedman compares Trump`s Second Amendment comments to the volatile political rhetoric in Israel, leading up to the assassination of Prime Minister Yitzhak Rabin in 1995.”

It even came on CNN on Wednesday in the noon hour, as National Journal editor Ron Brownstein repeated the line: “I saw Thomas Friedman compare this to some of the language that he heard in Israel before the assassination of Yitzhak Rabin. So while it didn't strike me as quite as inflammatory as many others heard it, I can see why people would be concerned.”