Beware liberal media propagandists trying to sell you a liberal as “just regular people....folding the kids’ laundry...who had never done anything political before.” Baloney. On Friday’s Morning Edition, NPR was the latest outlet who presented this fakery for one Shannon Watts, who founded the group One Million Moms for Gun Control after the Sandy Hook mass murder in December of 2012. 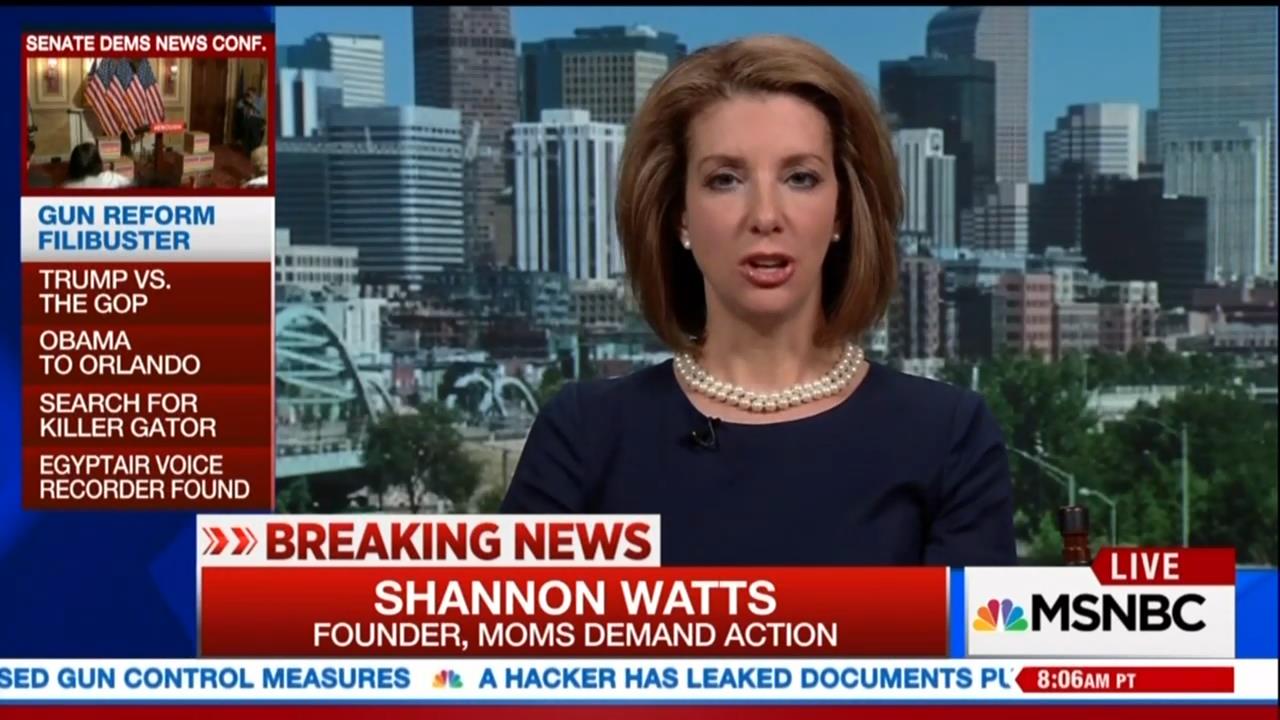 CHRIS ARNOLD: Much of the groundswell behind this crusade comes from just regular people pulled into it for their own reasons. For a woman named Shannon Watts -- she was drawn in by another mass shooting, the murder of 20 school children, 6 and 7 years old, in Newtown Connecticut. Watts wasn't there. She lived 800 miles away in Zionsville, Ind. She was folding her kids' laundry, actually, when the news broke. And she wanted to do something.

SHANNON WATTS: I was obviously devastated. But I was also angry. And I went online. And I thought surely there is a Mothers Against Drunk Driving for gun safety. And I couldn't find anything.

ARNOLD: Watts had never done anything political before. But she made a Facebook page. And she called it "One Million Moms For Gun Control."

WATTS: I only had 75 friends on my personal Facebook page. And it was amazing. I mean, I can remember watching the likes go from the hundreds to the thousands to the tens of thousands.

Does NPR think people can’t Google around on Shannon Watts? A donor search at Open Secrets for the Utterly Non-Political Mom Folding Laundry finds $1,750 in donations in 2012 to Barack Obama for President, and $250 to Rob Zerban, the Democrat running against Rep. Paul Ryan in Wisconsin. In 2011, she sent $500 to the Democratic Congressional Campaign Committee. In 2010, there was $500 to the DNC Services Corp., and $1,000 for EMILY’s List, which only funds female pro-abortion Democrats.

James F. Tracy at the Memory Hole blog revealed Watts is not the "accidental activist" she claims to be, but a public-relations pro (hence the phony “apolitical mom” schtick):

Overall, Shannon Watts, who until only recently went by the last name Troughton, began work fresh out of University of Missouri in 1993 as a public affairs officer for Missouri Governor Mel Carnahan [D.], the Missouri House of Representatives, and the Missouri Department of Economic Development.

In 1998 Watts (Troughton) moved on to further develop her propaganda acumen as Vice President of Corporate and Public Affairs at the major PR firm Fleishman-Hillard, where she remained until 2001. Watts then became Director of Global and Public Affairs at the Monsanto Corporation “where she led external initiatives designed to generate positive, proactive media coverage of the company’s agriculture biotechnology products.”

Between 2004 and 2006 Watts served as Director of Global Communications for GE Healthcare, General Electric’s $15 billion medical and diagnostics device unit. She then joined WellPoint, the nation’s largest health insurance corporation, as its Vice President of Corporate Communications.

At WellPoint Watts oversaw an impressive “30-person corporate communications team” until 2008, when she stepped down to begin VoxPop Public Relations.

Watts is also the phony who lobbies for gun control accompanied by bodyguards "armed with scary guns."

Feel free to ask NPR ombudsman Elizabeth Jensen for a correction to Chris Arnold's fairy tale of the apolitical mom.