Associated Partisans: No Party ID for Corrupt California Dems, Unlike the GOP in Vermont

The Associated Press is still the king of the wire services, used by most newspapers and TV stations (and even radio stations, if you can find news on them). So when it acts like Associated Partisans, it still packs a political punch.

When Democrats plead guilty of taking bribes in California, somehow today the AP's Amanda Lee Myers couldn’t use the word “Democrat” anywhere in the piece (and The Washington Post repeating the offense): 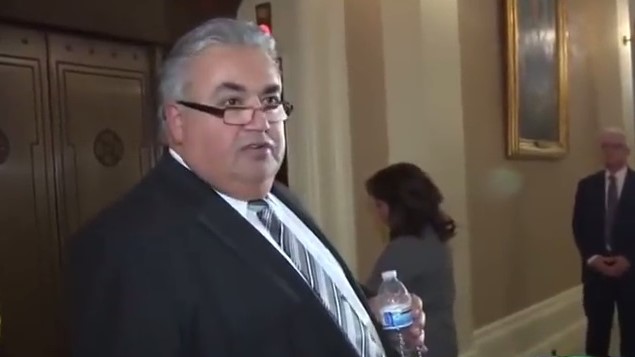 LOS ANGELES — Former California Sen. Ron Calderon agreed to plead guilty Monday to mail fraud as part of a plea agreement in which he admitted to accepting bribes in exchange for supporting certain legislation.

Calderon, 58, agreed to plead guilty to mail fraud through the deprivation of honest services, according to a plea agreement filed in federal Los Angeles court. Prosecutors dropped more than 20 other charges in exchange....

Geragos previously told The Associated Press that the government's plea agreement last week with Calderon's brother, former state Assemblyman Thomas Calderon, was an obvious effort to pressure his brother to do the same.

"Unfortunately this is the way the U.S. system of justice works," Geragos said. "You are facing enormous consequences in terms of sentencing guidelines and the government makes you an offer that you can't refuse, so you will sing from their script in order to get your head out of the noose."

Thomas Calderon, 62, pleaded guilty last week to a federal money laundering charge for allowing bribe money earmarked for his brother to be funneled through his firm.

Neither brother needed a party label?

But on Monday, the Sacramento Bee headline was “In plea agreement, Montebello Democrat admits accepting tens of thousands of dollars for official acts.” A week ago, with his brother, the Bee reported “Former Democratic Assemblyman Tom Calderon on Monday pleaded guilty to one count of money laundering in the corruption case involving him and his brother, former state Sen. Ron Calderon.”

Our old colleague Mark Finkelstein pointed out the Calderon game of Skip That Label and noted on the same day the AP (and again, The Washington Post) found the Republican party label in a story on a sex scandal in Vermont:

MONTPELIER, Vt. — A suspended Vermont state senator goes on trial this week on two counts of sexual assault, and up to four other legislators are expected to be called to testify.

Sen. Norman McAllister was arrested outside the Statehouse on May 7, 2015, on six counts, including three of felony sexual assault. Each one of the sexual assault charges could bring up to a life sentence.

The 64-year-old Republican lawmaker and farmer has maintained his innocence.

A few months back, our Tom Blumer noted they pulled this no-label trick with California state Sen. Leland Yee, who wasn't even named in the first paragraph. Yee was convicted of "soliciting and accepting bribes in exchange for providing help from Sacramento and conspiring to import weapons and ammunition into the U.S."