There seems to be a contest for mean-spirited sentences in the liberal media after Nancy Reagan's death, a page in the British "news" magazine The Economist could be entered in a vote for Best Sneering at the Dead. Their unbylined article was titled "Keeping Control," and it was all about how Mrs. Reagan was a rigid control freak who naturally grew furious when ever anyone crossed her best-laid plans:

Keeping life’s untidiness at bay was a full-time job. It started with herself. Only Julius could style her hair, and he had to be flown in from Los Angeles. As a teenager her nose was too big, so she had it done, of course. (She wanted to be a movie star; that never came to much, but she networked with Spencer Tracy and Clark Gable and met Ronnie, so it was worth it.).... 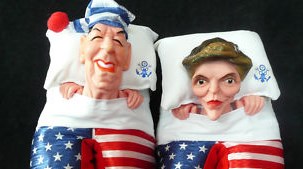 On every side lay disorder, even in the White House. Ashtrays that needed emptying (she would do it herself, if no one else would). Pictures hanging askew, which must be straightened. Coffee cups on desks. Aides coming in sweaty, wearing trainers and with mussed hair: just inappropriate. Appearances mattered, which was why she had refused to live in the governor’s house in Sacramento, that old firetrap, and instead moved to a 12-room Tudor mansion in a better part of town. Good taste, and a horror of mismatched plates, was the reason she spent $209,508 on new china for the White House, which everyone attacked her for.

Otherwise she was frugality itself, recycling unwanted presents and getting her rich friends to donate their furniture. Because everything had to be just so, she continually fussed, phoned and deployed her two steeliest weapons, the silence and the stare. Before state dinners, she checked that the salad leaves were perfectly arranged and the sauce exactly seasoned. When the Queen of England visited, she drafted the guest list five times over. If anything went wrong, she was furious. Naturally.

Her own history needed tidying, too. Two years were lost from her age somewhere. Her potty-mouthed mother was kept at arm’s length. Her father, a car-dealer, out of the picture since her parents’ divorce, was replaced as “real” by Loyal Davis, her stepfather, a respectable neurosurgeon who did not agree to adopt her for six years. As for her own children, they were frankly a nightmare: Patti a damn hippie and Ron, eventually, a ballet dancer. She ransacked his bedroom for drugs and worried herself sick that he was probably gay, but had to accept in the end that families couldn’t be wrapped up prettily in white paper. The hardest thing was that Ronnie had brought two children of his own, with Jane Wyman, to the marriage. Her shadow came too. They couldn’t be fitted in at all.

The Economist wasn’t alone in feeling catty. People magazine touted the great Reagan love story on its cover, but the Bitchy Mother part came out in the article, as Sandra Sobieraj Westfall reported:

According to a 1992 memoir by Patti, the loving wife was less so as a mother. A sometimes chubby girl, Patti describes the Reagan household as a tense “battlefield” as Nancy – on a constant diet – criticized her daughter’s weight and often slapped her face in anger. It was perhaps the singular flaw in the Reagans’ romance. “Their love affair was probably more important than their love for their children,” says Larry King. “The children were secondary to them.”

After the Reagans moved into the White House in 1981, critics quickly dubbed her Queen Nancy. In the midst of a recession, she sought to replace the drabness of the Carter years by ordering up new red-and-white china financed by her wealthy friends and hosting lavish parties, for which she donned gowns by the likes of Oscar de la Renta and Carolina Herrera.

This is where you wonder how People and Westfall can compose goopy copy for Michelle Obama and not see some of her time in the White House with the same conceits, the lavish lifestyle and the designer gowns, and no one in their media bubble could imagine mocking her as Queen Michelle. The story continued the attack on Nancy:

Some of her most memorable acts were her most controversial. Her use of an astrologer to consult on her husband’s travel drew howls. And while she was credited for what little attention her husband paid to the AIDS epidemic of the 1980s, she refused a plea from their friend and fellow actor Rock Hudson for White House help as he was dying of AIDS.

If you missed it, we handled this roughly negative spurning-Rock spin just a few posts back. If the Reagans had made a special arrangement for Hudson's hospital admission in France, these same media scolds would have accused them of hypocrisy for only helping their friend and not thousands of others.