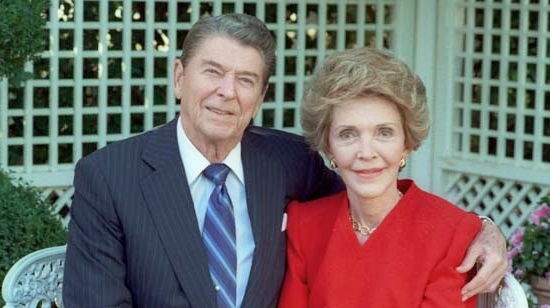 Washington Post readers found their Nancy Reagan obituary on page one to be fairly neutral as Lois Romano began: “Nancy Reagan, a former film actress whose crowning role was that of vigilant guardian of President Ronald Reagan’s interests and legacy, died March 6 at her home in Los Angeles. She was 94.”

But Joe Concha at Mediaite reported a much more vicious and tasteless obit has been sitting in the can for Mrs. Reagan’s death, as it first appeared online when the news broke:

Nancy Reagan had an undeniable knack for inviting controversy. There were her extravagant spending habits at a time of double-digit unemployment, a chaotic relationship with her children and stepchildren that could rival a soap-opera plot, and the jaw-dropping news that she had insisted the White House abide by an astrologer when planning the president’s schedule.

Concha slammed that prose on Mediaite, and then “Sometime Sunday evening, somebody — either Romano or an editor — stealth-edits the obituary by eliminating the lead paragraph in question altogether” to the introduction quoted above. “Despite the major change, [neither] Romano nor an editor inform readers any alterations to the piece were made.”

Romano still got some personal licks in at the Reagans, first on the fancy-clothes-and-friends business:

Mrs. Reagan took Washington by storm in 1981. Even before her husband — a movie star before he became governor of California — was sworn in, she swept into town with a larger-than-life cadre of wealthy California friends and celebrities who wore sable coats, knotted traffic with their shiny white limousines and threw lavish parties the likes of which were unprecedented at inaugural festivities. At first, the public seemed to embrace what was billed as the return of style and glamour after four years of the more modest style of peanut farmer Jimmy Carter.

But the glamour soon was seen as ostentation during a steep recession. After complaining that the White House residential quarters were in disrepair, and noting that she could find no set of matching china there, Mrs. Reagan turned to affluent friends to raise funds for $800,000 in renovations and $200,000 of new china.

Although no public money was spent, these two expenditures became symbols of excess. A high-profile trip to Britain for the wedding of Prince Charles and Lady Diana six months into the presidency only fueled her detractors.

Critics took to calling her “Queen Nancy,” which eventually became a popular postcard. By December 1981, a Newsweek poll reported that 61 percent of the public considered her less sympathetic than previous first ladies to the needs of the disadvantaged.

And then the gut punch on family matters:

Throughout his presidency and after, as Ronald and Nancy Reagan advocated family values, their relationship with their own children was a running drama, creating the public impression of a highly dysfunctional family.

Patti Davis’s 1992 memoir, The Way I See It, described a mother driven by appearances, abusive toward her and a habitual user of tranquilizers.

Does it matter what Patti Davis would say in 2016? And on communists in Hollywood:

Ronald Reagan had built his conservative credentials as a hard-liner, opposing the Soviet Union and communism. As far back as his days as head of the Screen Actors Guild, he refused to step up and help those in the entertainment industry whom then-Sen. Joseph R. McCarthy (R-Wis.) tried to expose as alleged communists.