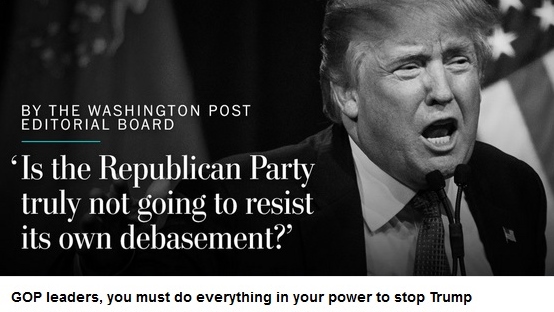 Recently, we noted The Washington Post published an anti-Trump column comparing the New York businessman to Charlemagne, who ordered a massacre of more than 4,000 in the year 782. But in a completely panicked lead editorial in Thursday’s paper, the Post editorial board decided to compare Trump instead to the 20th century murderers of millions: “He would round up and deport 11 million people, a forced movement on a scale not attempted since Stalin or perhaps Pol Pot.”

This came two sentences away from decrying how “He routinely trades in wild falsehoods and doubles down when his lies are exposed.”

As the editorial page at Investor’s Business Daily pointed out on Friday, media liberals lament the decaying “level of discourse” in our politics, and then make unhinged comparisons that make no historical sense. (Dear Post "Fact Checkers" -- you might want to look at mass migrations of recent times and send a memo over to Editorial.)

The Post demanded the honorable “leaders of conscience” in the GOP declare they would never support a “bullying demagogue” like Trump. Their final line? “Is the Republican Party truly not going to resist its own debasement?”

The GOP needed to decide “if their party will stand for anything other than winning. A political party, after all, isn’t meant to be merely a collection of consultants, lobbyists and functionaries angling for jobs.”

But this isn’t the position the Post editorial board took when President Clinton committed perjury in a sexual harassment inquiry in 1998. Even as they admitted Clinton was "probably guilty" of lying under oath -- the physical evidence of a sexual relationship with Monica Lewinsky became impossible to deny -- “winning” was more important than avoiding “debasement.”

When you enter the terms “President Clinton” and “debasement” around his impeachment in 1998, you get nothing. On December 20, 1998, the day after the House vote to impeach Clinton, the Post editorial board did not rip at the Democrats. It began by condemning the Republicans: 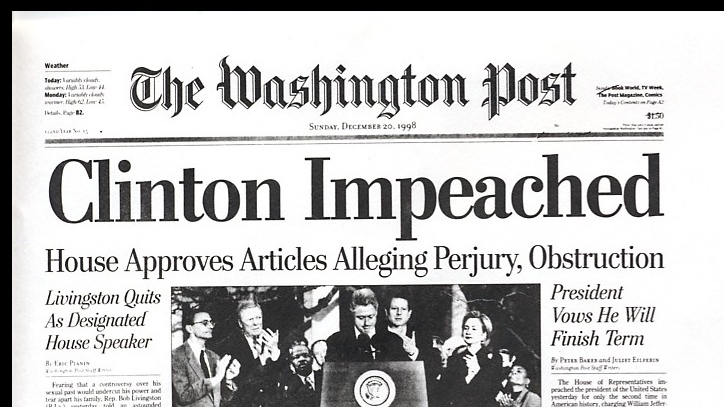 THE VOTE YESTERDAY by the House of Representatives to impeach President Clinton for lying to Kenneth Starr's grand jury and for obstructing justice in the Paula Jones case was a mistake. It had an understandable basis, given both the president's misdeeds and his consistent and infuriating unwillingness to acknowledge them. But impeachment's supporters, in their enthusiasm to defend the legal system against President Clinton's abuses of it, ignored the long-range implications of their own votes. They have collectively -- in some cases, for reasons of deep conviction, and in other cases, out of partisanship -- lowered the bar for future House actions against presidents....

Grand jury perjury is a serious offense, one of which we believe the president probably guilty -- though, perhaps, not prosecutably so. These presidential lies sit at the margins of impeachability, and whether or not this article should have passed was a close call. In the end, however, the very closeness argued against it.

That Post editorial was much more reserved, and didn’t even compare President Clinton to other historic American womanizers like Wilt Chamberlain or Charlie Sheen.