Harris-Perry Refuses to Show at MSNBC: 'I Am Not a Token, Mammy or Little Brown Bobble Head' 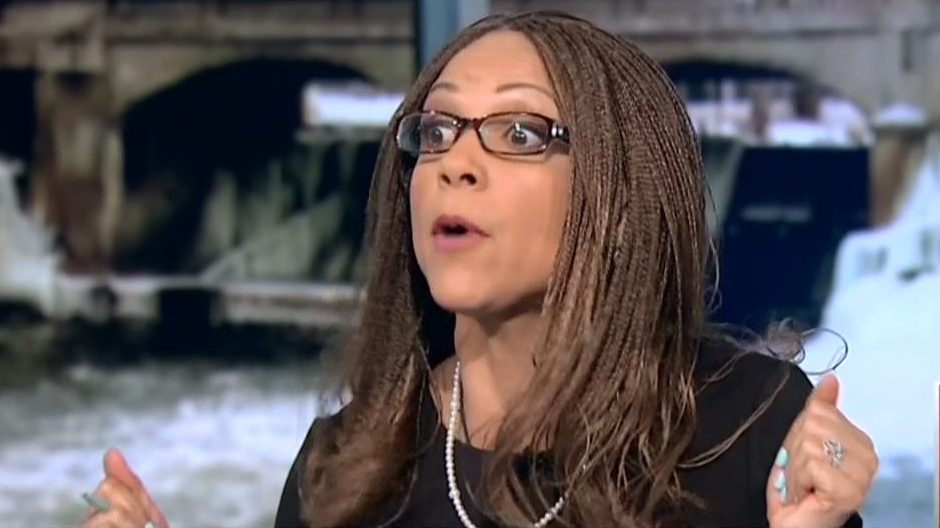 In an act of protest or perhaps a temper tantrum, John Koblin at The New York Times is reporting MSNBC weekend host Melissa Harris-Perry said she was refusing to go on her show on Saturday after several weekends of having her show pre-empted for campaign coverage. She said in an e-mail she felt “worthless” in the eyes of NBC News executives.

“Here is the reality: Our show was taken — without comment or discussion or notice — in the midst of an election season,” she wrote. “After four years of building an audience, developing a brand and developing trust with our viewers, we were effectively and utterly silenced.”

Naturally, the fight quickly became racialized, just as her every show did:

In her email, Ms. Harris-Perry wrote that she was not sure if the NBC News chairman, Andrew Lack, or Phil Griffin, the MSNBC president, were involved in the way her show was handled recently, but she directed blame toward both.

“I will not be used as a tool for their purposes,” she wrote. “I am not a token, mammy, or little brown bobble head. I am not owned by Lack, Griffin or MSNBC. I love our show. I want it back.”

Ms. Harris-Perry is black, and Mr. Lack and Mr. Griffin are white. In the phone interview on Friday, Ms. Harris-Perry clarified her remarks and said she did not think race played a role in her recent absence from the air.

“I don’t know if there is a personal racial component,” she said. “I don’t think anyone is doing something mean to me because I’m a black person.”

An NBC News spokesman said in a statement, “In this exciting and unpredictable presidential primary season, many of our daytime programs have been temporarily upended by breaking political coverage, including M.H.P. This reaction is really surprising, confusing and disappointing.”

Perhaps Harris-Perry can see the writing on the wall, since Al Sharpton went from five prime-time shows to one hour on Sunday as MSNBC's attempting to shift back to a more traditional straight-news format. Ms. Harris-Perry said not being able to talk to her viewers felt like a “betrayal.”

“It is perfectly fine, 100 percent reasonable and perfectly acceptable for MSNBC to decide they no longer want the M.H.P. show,” she said. “But they should say that, they should cancel the show, they should stand up. And maybe it would be rewarded with huge ratings, but they shouldn’t kill us by attrition and take us off the air without telling anybody, including us. That for me is what’s painful and difficult.”

Harris-Perry won our [worst] Quote of the Year in 2015 for suggesting the phrase "hard worker" to describe current politicians like House Speaker Paul Ryan can be insulting to American slave history.

UPDATE: Jamil Smith, a former producer for MHP, posted her "Dearest Nerds" memo on Medium, and here are some more snippets of self-pity and news:

-- "Social media has noted the dramatic change in editorial tone and racial composition of MSNBC's on-air coverage. In addition, Dylan Byers of CNN has made repeated inquiries with MSNBC's leadership and with me about the show and what appears to be its cancellation. I have not responded to reporters or social media inquiries. However, I am not willing to appear on air in order to quell concerns about the disappearance of our show and our voice."

-- "Undoubtedly, television nurtures the egos of those of us who find ourselves in front of bright lights and big cameras. I am sure ego is informing my own pain in this moment, but there is a level of professional decency, respect, and communication that has been denied this show for years. And the utter insulting absurdity of the past few weeks exceeds anything I can countenance.

"I have stayed in the same hotels where MSNBC has been broadcasting in Iowa, in New Hampshire, and in South Carolina, yet I have been shut out from coverage. I have a PhD in political science and have taught American voting and elections at some of the nation's top universities for nearly two decades, yet I have been deemed less worthy to weigh in than relative novices and certified liars. I have hosted a weekly program on this network for four years and contributed to election coverage on this network for nearly eight years, but no one on the third floor has even returned an email, called me, or initiated or responded to any communication of any kind from me for nearly a month. It is profoundly hurtful to realize that I work for people who find my considerable expertise and editorial judgment valueless to the coverage they are creating."

-- "While MSNBC may believe that I am worthless, I know better. I know who I am. I know why MHP Show is unique and valuable. I will not sell short myself or this show. I am not hungry for empty airtime. I care only about substantive, meaningful, and autonomous work."