National Review was clearly outnumbered on the Fox News show Outnumbered today. The entire panel lit into NR for daring to assemble a symposium titled “Against Trump.” The Fox panel was unanimous that this was “offensive,” would have “zippo” effect, and only underlined a counter-argument that conservatives in “tassel loafers and bow ties” are “defunct” and “worthless.”

They professed their “love” for NR editor Rich Lowry, a Fox regular, but their words clearly said exactly the opposite. Aside from an opening 18-second soundbite from Lowry from Thursday night’s Kelly File, it was a rhetorical firing squad.

It started with the lone male on the panel, Fox pundit Peter Johnson Jr: 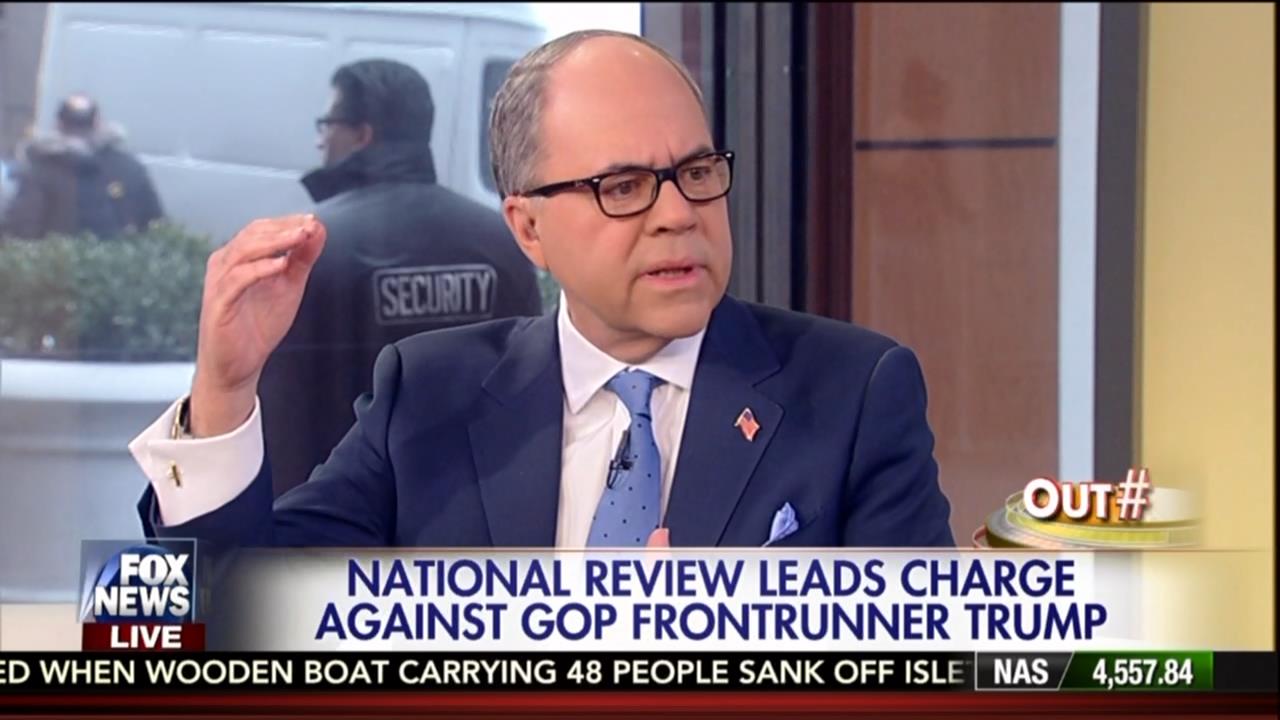 PETER JOHNSON, JR: I think it’s a hit-job, I think it’s a put-up job, I don't have any sense of credibility about it. Some of the people have had grudges between Donald Trump and themselves. Rich Lowry – they’ve been in a tweeting contest, back and forth for a week or so in September where they were calling each other incompetent, and Rich Lowry said something unrepeatable on the air about Donald Trump, so there is bad blood.

But somehow these folks are supposed to be immune, or above the political fray. This is a totally political statement that they are making. They don't like Donald Trump and they want the world to understand that and to believe it and to follow them. The truth is a lot of Americans don’t know who National Review is, so the impact is going to be zippo, zero!

Harris Faulkner really came uncorked against National Review’s stand as “offensive” to voters, as if a conservative journal should never offer conservative readers any advice before an election: 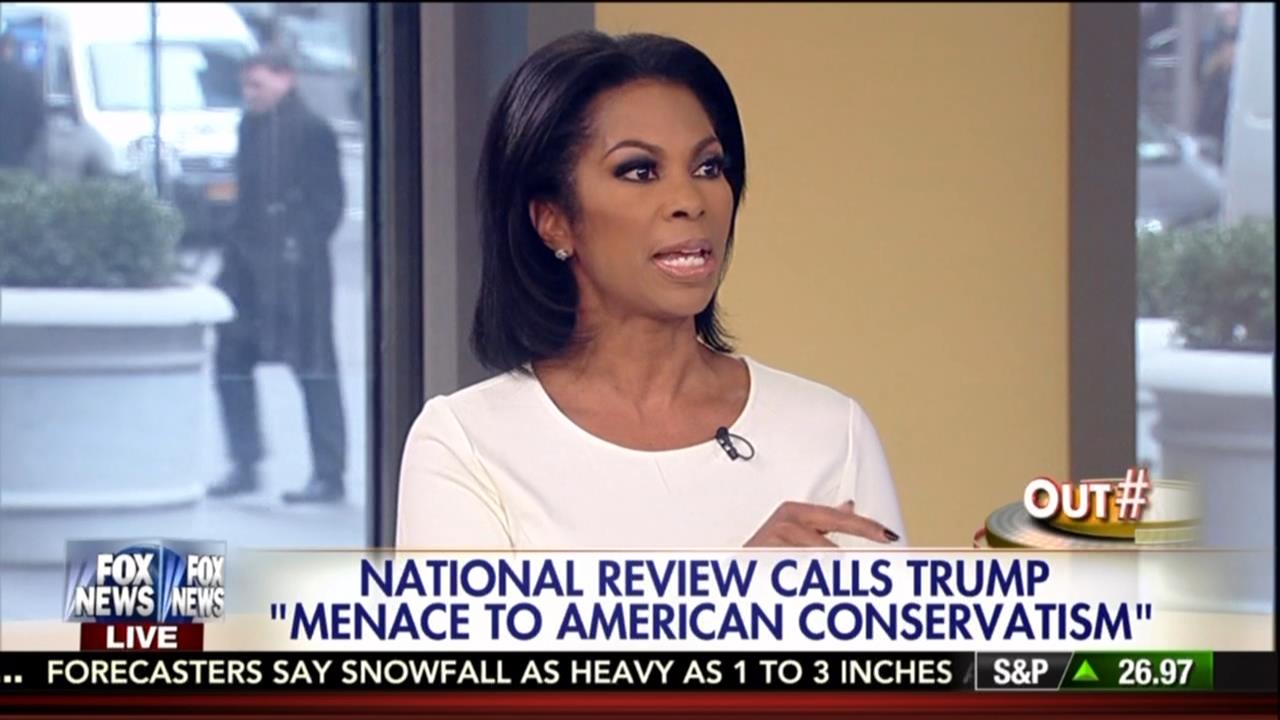 HARRIS FAULKNER: These words should disturb every American. “He is not deserving of conservative support in the caucuses and primaries.” Whose job is it to decide who gets to be where? It’s the voters who decide. It is not any particular party. That’s offensive on its face. We love Rich Lowry, we do –  but it’s up to the voters, it is not up to him or anybody else. They can write about what they want about but if I were part of the establishment I would walk as far away from this article, from this magazine as possible if I wanted ever to gain the respect of those people who call themselves the voters. They hold the power.

Tantaros said the “bedwetters in the establishment” don’t understand that Trump’s appeal to the blue-collar voter “could be huge,” and “he is more conservative than so many candidates on issues like immigration.” She pressed Stacey Dash to join in the Lowry-bashing:

Andrea Tantaros was touting some old advice as "the counterpunch" to National Review  from the old white-power paleoconservative Samuel Francis, as warmed over by Michael Brendan Dougherty at The Week:

What so frightens the conservative movement about Trump's success is that he reveals just how thin the support for their ideas really is. His campaign is a rebuke to their institutions. It says the Republican Party doesn't need all these think tanks, all this supposed policy expertise. It says look at these people calling themselves libertarians and conservatives, the ones in tassel-loafers and bow ties. Have they made you more free? Have their endless policy papers and studies and books conserved anything for you? These people are worthless. They are defunct. You don't need them, and you're better off without them.

Melissa Francis made the Trump tag-team complete by disagreeing with both Rich Lowry and our leader, Brent Bozell: 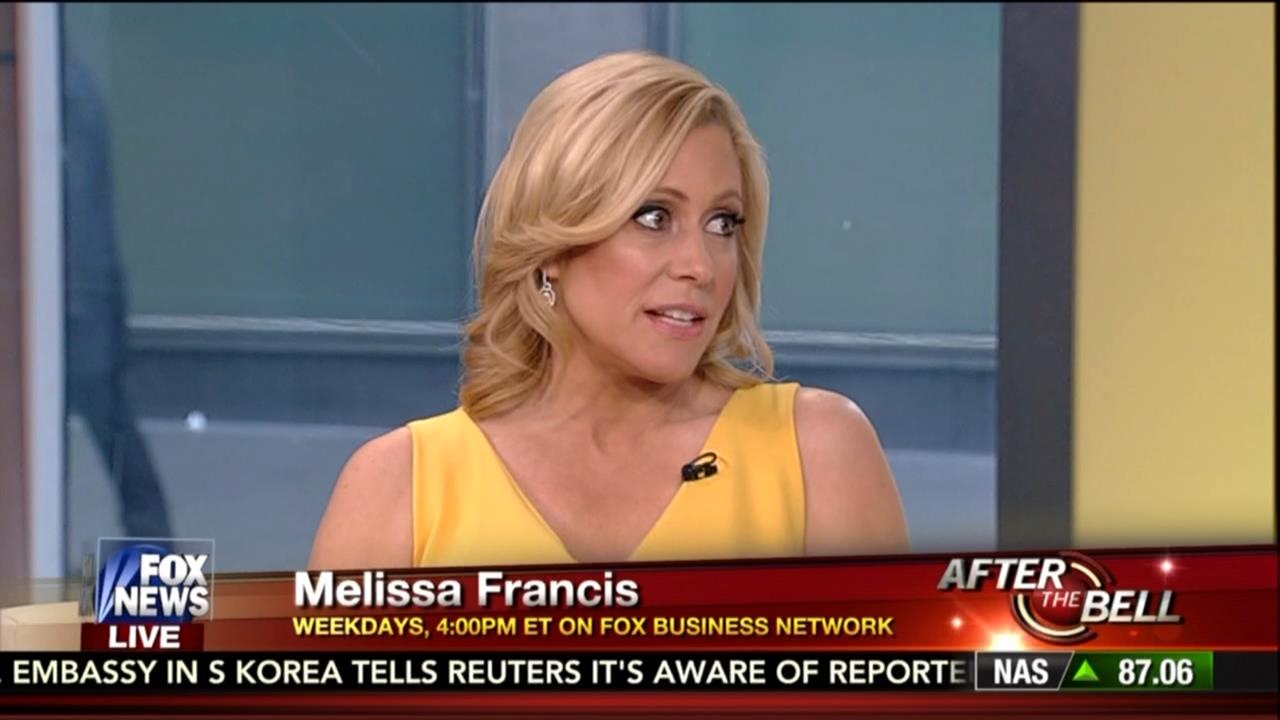 MELISSA FRANCIS: A lot more people will hear about the coverage than actually read it. Unfortunately, that’s one of the criticisms that was true from Trump, unfortunately, that many people don’t actually read the National Review.  I think that the rebuke actually helps him, in my opinion, because it helps his rebel cred. He says he is not part of what has been here before. He is different. The fact that folks from the right are attacking him, helps him with people he is trying to win over.

Like you said, Rich Lowry, very smart guy, we love him, he’s been on the couch with us, but he says “The choice is clear, it’s anybody but Trump.” No! Not anybody but Trump, people on the right are saying! I don't want Hillary. I want someone who can win.

And also, Brent Bozell said earlier today on our air that the right is supporting him [Trump] because they can control him. No, they resisted him for a long time. They are only supporting him now, at the very last minute, because they think he can win.

There have been more sides of this issue on other Fox shows, but this was a five-to-zero smackdown.