Michele Bachmann: How Newsweek Made Me Into the 'Bride of Frankenstein'

In the podcast, it comes around minute 21: 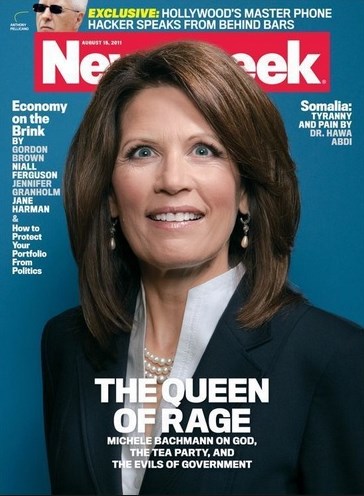 As Bachmann recalls it, the photo shoot at the Willard hotel near the White House was already over. The photographer, Chris Buck, showed her a number of immaculate pictures he'd taken, and she presumed that the cover would come from that batch. But then, Buck made another request.

“I was just about to leave, and the photographer said ‘You know, I didn’t get my test shot of you,’” Bachmann says. “And I said ‘What are you talking about?’ He said, ‘I need to have a test shot to send to my editor.’”

Bachmann says that Buck had her sit on a bottom rung of a ladder in a closet-like space, in front of a stark blue background. She remembers complaining about this setup: “It was very uncomfortable, because I had to kind of squat down on this ladder and I said, ‘I don’t even know why we we're doing this. You’ve got your shots.’”

But Buck reportedly insisted. He hit a strobe light and snapped the infamous photo.

When the campaign staff initially saw the cover, they were distraught. Their facial expressions were so horrified that when they came to tell Bachmann the news, she presumed they were relaying that she'd been indicted.

When she saw the cover herself, Bachmann says she thought she looked like the Bride of Frankenstein.

She said the staffers thought she was going to cry, but she said "Isn't this par for the course, you guys?" She said she discussed with staffers putting out a side-by-side photo with her wearing the same outfit in a Newsmax magazine cover story -- but she had declared a "no whining" rule about the media, and so she didn't put that out.

The photographer denies this story – but of course, he thinks however he tricked her into it, it was a “fair depiction.” Which means he’s just as much of a jerk as Tina Brown:

Buck, an experienced photographer with an impressive portfolio, denies Bachmann’s account of events. He tells The Huffington Post that the photo was not a test shot and he never suggested as much to her.

"She might have some legitimate argument against that picture being used, but the idea of that being a light test is not a good one,” Buck says. “I ultimately felt it was a fair depiction of how she carried herself.”

What's too easily forgotten after this nasty Newsweek visual bait-and-switch is the actual cover story by Lois Romano, complete with insulting language like this: "In Iowa, where she was raised, Bachmann has become the living embodiment of the Tea Party. She and her allies have been called a maniacal gang of knife-wielding ideologues. That's hyperbole, of course. But the principled rigidity of her position has created some challenges for her campaign."

In Iowa, where she was raised, Bachmann has become the living embodiment of the Tea Party. She and her allies have been called a maniacal gang of knife-wielding ideologues. That's hyperbole, of course. But the principled rigidity of her position has created some challenges for her campaign. - See more at: http://www.newsbusters.org/blogs/geoffrey-dickens/2011/08/09/if-you-thought-newsweeks-cover-photo-bachmann-was-bad-wait-until-y#sthash.fj8lj8Bz.dpuf